I was thinking maybe stride bass or something.

‘Waltz’, of course, originates as a decription of a dance, extending to the style of music to which a waltz can be danced to – as indeed is the case with many musical characterisations. The dance of the waltz consists of one ‘down’ step (– a free, natural stride taken with the leg swinging in the same manner as in walking and with the heel making first contact with the ground) followed by two ‘up’ steps, taken with the legs extended and with the toe making first contact with the ground. Whether the dancers actually achieve different ‘heights’, as in the English or slow waltz (with the dancers remaining on the ball of the foot during the ‘toe’ steps), or remain level due to the need for rapid rotation in the quicker Viennese waltz does not change the fundamental pattern of a heel stride followed by two toe steps. This down-up-up pattern is matched by the music, whether you want to think of vertical inclination or perhaps weight: heavy-light-light, or any other approriate metaphor.

The Foxtrot is a dance danced in 4/4 consisting of a ‘heel’ stride over the first two beats, followed by two ‘toe’ steps on the third and fourth beats (if you have ever learnt the style taught by the Fred Astaire™ school of ballroom dancing then sadly what is called the Foxtrot is a strange modification in which the pattern of steps repeats every 6 beats, not every four; please put this from your mind). A foxtrot is normally danced to big band swing – think your big Sinatra numbers – which don't always have a down/up or heavy/light emphasis between the first beat of the bar and the remaining beats; however your examples of “Our House” and “For No One” are instantly recognisable to me as a Foxtrot rhythm, and probably would have been widely recognised as such certainly at the Beatles' time when ballroom dance styles were still part of the cultural memory.

Regarding other replies, a polka of course is a dance in 2/4 consisting of two quick steps followed by a slow step (followed by the same in the other direction), often slightly ‘swung’ in rhythm https://en.wikipedia.org/wiki/Polka. I don’t see that as being at all a good fit for this question.

Edited to add: Dancing a polka can feel quite similar to dancing a Viennese waltz, and with good reason. However the polka dances the steps quicker than the waltz (you could perhaps write it “OM (pa)-pah - OM (pa)-pah”), whereas a Foxtrot dances them slower: OM - ? - pah - pah (– of course the musicians need something to do in that second beat!)

Certainly "waltz style" or "waltz accompaniment" etc. will be understood generally to be "bass chord chord" but it isn't a perfectly clear meaning.

I think historical period for various styles and basic variations of the patterns need to be considered when thinking about what label is appropriate.

There is a similar problem with using the term "stride." That's a particular jazz piano style. You might not want to use that term if the music isn't jazz. It's not some music theory sin, but it could give the wrong impression of the intended style.

I have thought that "polka style" would be a good label for waltz style in duple time. But the trouble with that is you might not want to suggest polka if the music isn't really a polka.

The other thing, which ultimately I think is best, is just name the dance form intended. If it's a polka, call it "polka style". If it's a march, ecossaise, etc. just call it by that dance form. If it is not one of those well known dance styles, "bass chord" or "om pah" seems clear about what to play while stylistically and metrically neutral.

The one you're asking about, C, could be called 'boom-chick-chick-chick' or (as you suggest) 'oom-pah-pah-pah' I suppose. As far as I know there's no more respectable name for it! 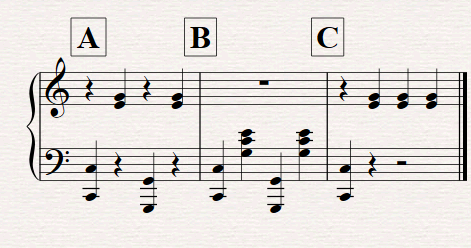 I've heard it called the Oom-pah-pah just like for a waltz. Another name (I think there are several) is "boom-chick" accompaniment.

Stride is one way of putting it. In general, accompaniments that are based around one bass note and then a chord or two above it (for example, a polka that goes (C Eb-G -> G Eb-G)xF or a waltz that goes (C Eb-G Eb-G -> G Eb-G Eb-G)xF ) I have heard referred to as boom-chuck. What you are describing seems like an unconventional boom-chuck. Not bad by any means, just seen less frequently than the other two described

Not the answer you're looking for? Browse other questions tagged terminology accompaniment or ask your own question.

20
Able to recall music in its correct key, but don't have perfect pitch -- what is it called?
1
How to improve piano accompaniment for singing
5
What is it called when the accompaniment and vocal melody don't match?
0
What Notes to Play as Accompaniment in Fingerstyle?
0
Polyphony vs Monophony
3
Making accompaniments (played on the piano by a beginner) sound better
6
Chords behaving as a melody
5
How might this chord, D-F-G-C in D dorian, be named?
0
How to decide what voicing/register to use when writing an accompaniment?