Is hocket the same as dovetailing?

Is there a difference between the two? There is quite a bit of stuff on dovetailing but I cant find much info for "hocket effect"

No, they're not the same. A hocket (the word means 'hiccough') is produced by two or more interlocking melodies or rhythms, each of which is gappy enough to let the other be heard! The Oxford Dictionary of Music defines a hocket as a

'device in medieval vocal music whereby rests were inserted into vocal parts, even in the middle of words, to intensify expressive effect.'

There's a Wikipedia article on the subject.

Compared with hockets, which are by nature somewhat disjointed, dovetailed passages would be snugly fitted together, with any sharp edges chamfered. Music is full of smooth joins.

Here's an example of a clarinet hocketting with three bassoons, from Moondog's Symphonique #1 (Portrait of a Monarch):

I think those scandalous glees from the C17th and early C18th, which - when you listen to them - seem to be full of sexual references yet - if you examine the words - are utterly innocent, each 'bad' word being only the result of two innocuous words colliding, would qualify as hockets. No voice has the whole thing.

The Balinese Ramayana monkey chant (appropriated for use in the films Satyricon and Blood Simple) uses hockets to produce rhythms which would otherwise be impossible. These Indonesian instruments [From 3'23"] (whose name I don't know) are also hocketting to make the tune, each instrument having only one pitch.

Hocket is used heavily in drumline music. It's an interleaving of rhythms. Let me draw an example quick-- 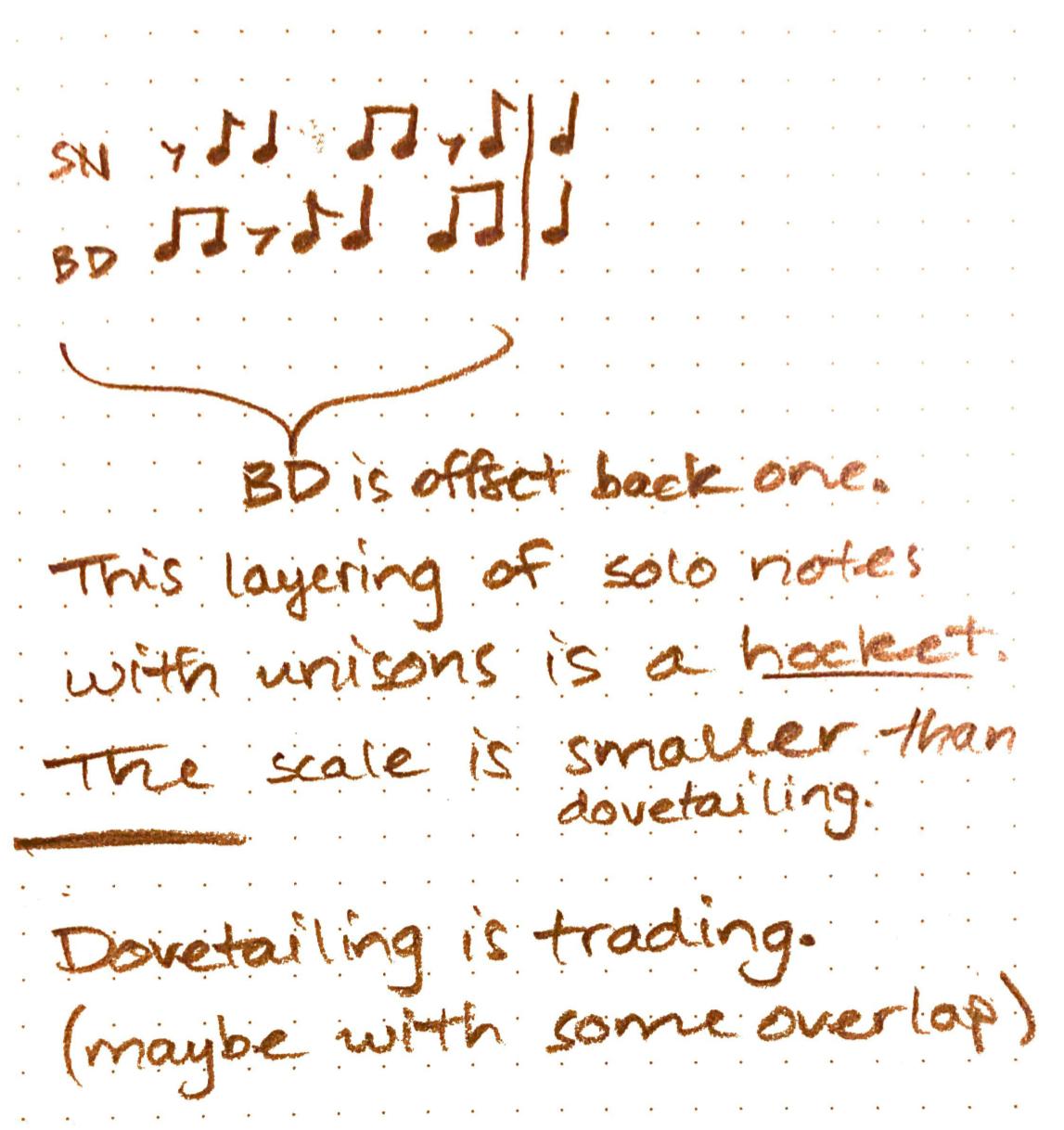 I'd say hocket happens on a smaller rhythmic value than dovetails, and involves heavier use of layering because it wants to highlight interchange between parts, not produce a fluid line.

Funny enough this dates back to motets! https://en.wikipedia.org/wiki/Hocket

Not the answer you're looking for? Browse other questions tagged orchestration or ask your own question.

8
Orchestration and painting evenly over the spectrum
3
What instruments are asked for in this original Sousa score?
9
In classical music scores we often find French horns of different pitches. Why is that?
6
Incorporating the piano into the orchestra - when and why?
5
Scoring for the harp
2
Instrumentation of the Rite of Spring
2
Clarinets in the Rite of Spring
5
What are the typical trumpet parts in classical music?
11
Double basses in Beethoven's Eroica
7
Note with two stems in snare drum part [Ravel's Miroir]: What is the result?