How to arpeggiate a seventh chord using only 3 notes?

I have various doubts about how to play a song when only the chords are available. But when trying to read the score of some musics in order to get the patterns to use. I have face this A7 chord of the image that makes me wonder, where is the A note? 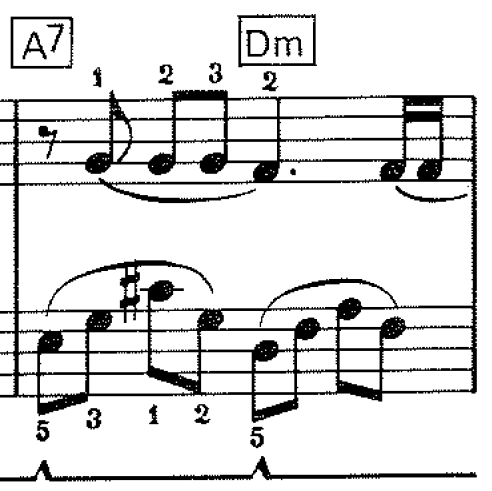 Arpeggiating isn't an exact science. You could play two notes (or more) during the arpeggio.

Chord-wise, the first to be sacrificed is usually the 5 note - in chord C7, for instance, the G would go Think about it - without C, it's not a C chord. Without 3 (E), it's not major, and without 7 it's not a 7th chord. So the same could apply in arpeggios.

If someone else is playing the root (say, bass) then that could go, so you could play a chord of more notes leaving the root out.

Or, you don't need to play one-note-per-beat, you could still play all 4/5/6 notes by sliipping in a couple in between the beats.

I think your question might be better worded as...

why did the composer or arranger of this sheet music use an A7 chord label for chord tones E G #C when the purported chord root A is missing?

The simple answer is: in this case the chord is regarded as an incomplete chord.

Strictly speaking you would say the first chord is a C# diminished chord in first inversion. You could label it like C#dim/E with jazz labeling or Dm: viio6/3 with Roman numeral analysis.

Why would someone treat it as an incomplete dominant seventh rather than an leading tone triad? I think two main reasons:

So, while vii06/3 i and V4/3 i are sort of functional equivalent, the labeling of V using an incomplete chord is a bit more straight forward in showing the dominant to tonic progression.

Another way to understand the omission of the root in this progression is through looking at the voice leading. Here are two basic version of the harmony with the A omitted and included and also with the D doubled at the octave...

The essential voice movements are the leading tone moving to the tonic (C# D) and the subdominant moving to the mediant (G F.) The supertonic to tonic (E D) is a bit subordinate. But notice the treatment of the dominant (A.) That tone doesn't move. There is a kind of redundancy that allows for an omission.

Chord symbols are an approximation and simplification of essential harmonic ideas for accompanists, leaving precise details up to players to decide. Whoever wrote the notation, declared that the essential idea is "A7", and playing the notes written on the lower staff is one possible realization of that idea.

Chord symbols are a way to describe the overall story in rough simplified terms. "Boy meets girl, boy learns piano, girl leaves boy." "A7 Dm" That story can be told in infinitely many different ways, when you get to details.

The simple answer is that this isn't actually an A7 chord, it's a first inversion C# diminished chord.

When you go back before functional root-based chordal practice, you had basso-continuo-based practices. One of the most common guidelines for harmonizing bass scales was the rule of the octave, which typically prescribed a 6-chord (first inversion triad) over the second scale degree, both ascending and descending, which results in a diminished chord. I've recently been coming to realize just how common this harmony was in 18th century music.

Gjerdingen's book on Galant Schemata would call this pattern (descending 2 to 1 bass, with a 6 chord over the 2) a Clausula Vera. Depending on the previous bar, it might even be part of a Prinner.

The picture in the OP has the appearance of coming from an "easy piano" arrangement. In such arrangements, it is not uncommon for the chord notation and staff notation to differ slightly.

In the case pictured, the arranger is likely trying to preserve both the voice-leading (as discussed by Michael Curtis) and simplicity of fingering/hand-movement. Thus, the "correct" chord is A7, but the arranger felt it would be easier for a pianist playing from the staff notation if an incomplete chord was used.

Since the G is prominent in the melody, it would be fair to replace one or both Gs in the accompaniment with As, giving you a complete chord. I would suggest perhaps leaving the first G as is, to emphasize the dissonance of the harmony, but change the second G to an A to capture the overall flavor of the A7 chord.

It does beg the question why the arranger didn't write the left-hand arpeggio as E-A-C#-A, since the melody carries the G.

5
What is the relation of guitar chords to actual notes in the measure?

17
How to memorize seventh chords and inversions on piano?
10
In piano music notation how are notes distributed between the staves?
7
Question about playing chords
8
Can bass chord notes be different octaves after playing the root?
4
Chord construction using the minor scale
8
When you look at (piano) sheet music, how do you "think about" which notes are being referred to?
4
Is practicing seventh chords ascending/descending chromatically effective?
1
What is meant by "strength" in piano playing?
5
How do you know which order to play stacked notes in
2
What are letters in parentheses (no chords)?