Advice for positioning my pinky on the fretboard, it is slightly twisted toward the ring finger

Hi I am a newbie here trying to learn guitar and I have been having issues with using my pinky. As you can see in the first picture, my pinky has the tendency to rotate toward my ring finger. The problem with that is that sometimes because of the way my pinky is twisted, the nail part of my pinky is in contact with the string instead of the flesh, and the string doesnt ring out properly because of that. The second picture is an example of me trying to play a C chord with pinky on the 1st string 3rd fret.

I also find that sometimes on the thinner strings (1st and 2nd), my pinky would slide a little bit toward my ring finger when I press on the string because of the way my pinky is angled, so I am finding it a bit hard to control the amount of force I use on the pinky.

I understand that practice makes perfect and it takes time to gain strength on my pinky. But I am hoping to hear from someone with similar situation or if there are any tips/exercises that could help with using my pinky properly. Thanks! 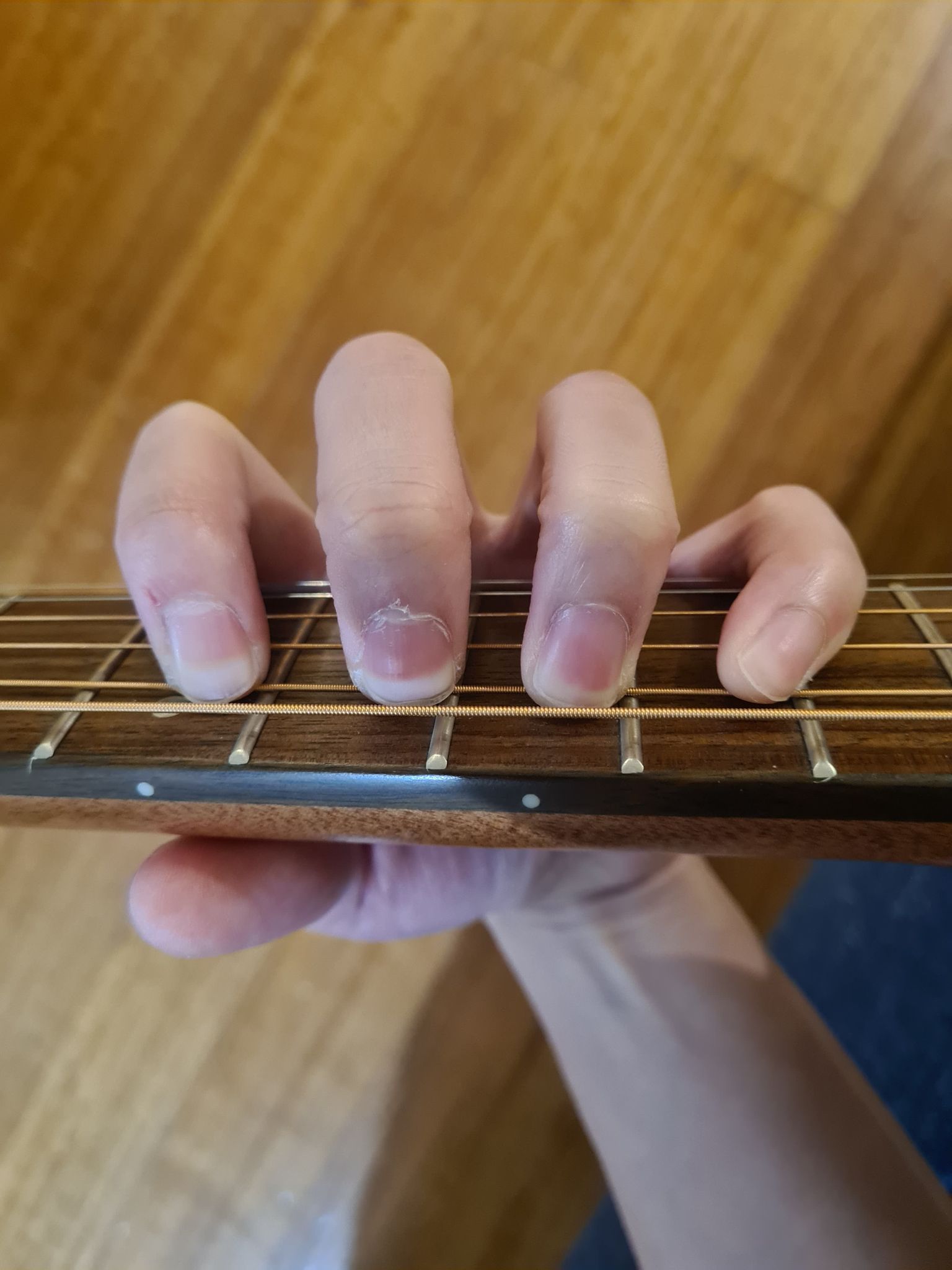 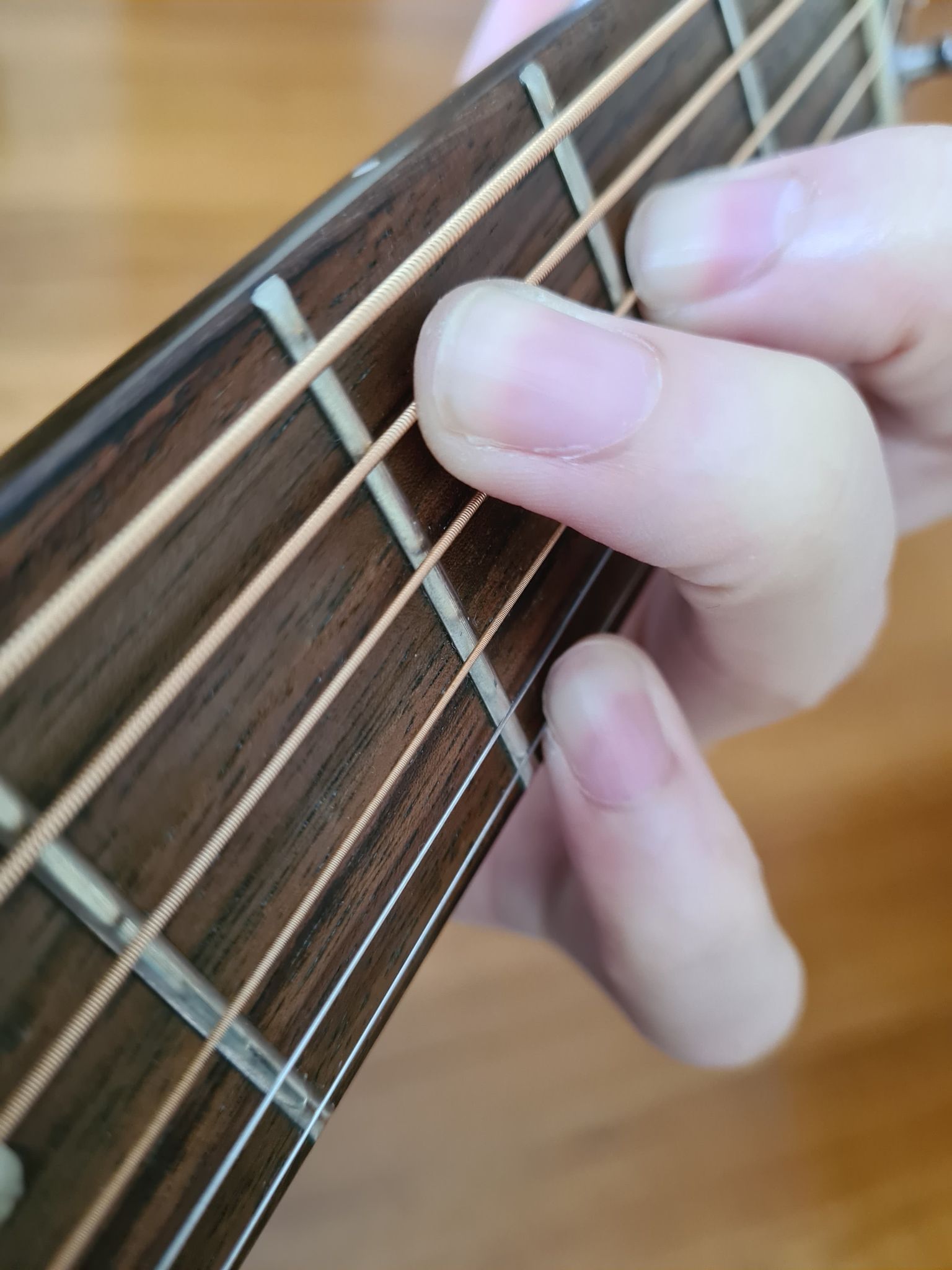 There will be no right answer for this. your pinky goes where your pinky goes. Everyone's physiology is slightly different, so one will say like this, another like that.

That apart, looking at your nails, you're pressing too hard (lack of blood in tips). It may be just for the picture. And I can't think of any time when you'll need to keep all four fingers on four frets like that first pic.. Often, when pinky comes out to play, your whole hand can, and will, move slightly up the neck, so that angle is not what it shows in the picture. In fact, sometimes both pinky and ring can be deployed on the same fret, so there's hardly any pressure needed from pinky. And - your thumb is maybe a little too high on the back of the neck. It's a fulcrum point rather than part of a vice - leverage comes from moving the elbow out.

As long as your fingertips can get close to the fretwire, with minimum pressure, that's going to be fine. We all press too hard too often! And whenever you can, try to get adjacent fingeers touching each other somewhere - it adds a little solidarity, and makes getting all fingers on a shape quicker and easier.

I can relate. At a young age I was making great progress towards becoming a guitarist and playing guitar in my high school jazz band. After I broke the pinky finger on my fretting hand, it ended up crooked and pointed towards my ring finger creating issues similar to yours. Trying to play after my finger healed but was crooked was so frustrating, I gave up playing guitar, quit the band, and sold my guitar and amplifier.

20 years later I decided to give guitar playing another try. I learned to shift my hand position on chords that involved my pinky so that I could cleanly fret the string in a manner that allowed the note to ring clearly (even though it was the outside corner of my pinky that was touching the string insead of the pad of the fingertip). The more I played the stronger the pinky became. Also, the more I played, the less of a problem it became.

Don't be discouraged. Many guitarist learn to overcome far more serious handicaps than yours or mine. The geometry of your fretting hand relative to the fretboard may look strange on some chords. That is okay. The way the chord sounds is more important than what you look like when fingering it. Every guitar player has different shaped and different sized hands and fingers - therefore not every guitar player will be able to use the exact same hand and finger position to play every chord. You will find the optimal balance (that works for you) between good form and an ability to cleanly play the chord.

It's a matter of adapting, improvising - practice and perseverance. The more you play, the easier it will become. Eventually you will not even see your pinky as an issue at all.

Good luck and enjoy the journey.

The answer is the fretting hand rotates at the wrist like turning a door knob.

Your hand is either orientated so that the neck is against the flat part of your knuckles . ( fingers bend to fall on 1 finger per fret the length of neck )

Or the second shape is your wrist orientated so that your hand is up and down . ( when you bend your fingers over they fall to where you are fretting a separate string for each finger all in same fret )

It is the particular voicing or thing your playing dictates which of these or a combination of both .

Lastly, no matter what you fret Your wrist has to be straight, you can't bend it

In the picture your wrist is bent like a C shape Straighten that to perfect straight like I shape . Then just rotate your wrist like turning a door knob both directions until your fingers reach the fret. Always keep straight wrist .

Only press with your fingers hard enough to sound the fretted note . Don't press down harder than this. You can practice pressing so light the note can't spund then gently increase a tiny bit just until the fret does sound . You dont want to think in terms of pressing hard with the finger tips. You want your biggest knuckle that connects to the hand to be where you are pushing down from . Don't press down from the area near your finger tip.

Not the answer you're looking for? Browse other questions tagged guitar technique exercises or ask your own question.