Ask Question
Asked 3 months ago
Active 3 months ago
Viewed 142 times
6
This question already has answers here:
Where did the British names for different note lengths come from? (2 answers)
Closed 4 months ago.

A crotchet in British English is one beat - a quarter in American English.

In French, the very similar word croche means a quaver (eighth note), just half the value of a crotchet.

The two words are too similar for them not to have come from the same root word - which is French for crooked, bent, hooked; a crochet is a little hook, we use the same word for a kind of knitting. Now, a crotchet (English) looks less like a hook than a quaver, so pictorially, the French term is pretty accurate. (They call a one beat note la noire (the black), again a more descriptive term)

Question - why and how did we end up with crotchet as the English term for that note value?

Etymology is rarely a precise science. For instance, in my part of the world there are two places with 'Chadwell' in the name, and the consensus is that the 'Chad' part of each has an entirely different derivation!

But we know that in mensural notation, the note that was half the length of a minim could be written as an open note with a hook or a filled one without. So one language may well have assigned 'hook' to the old notation, the other to the newer one. 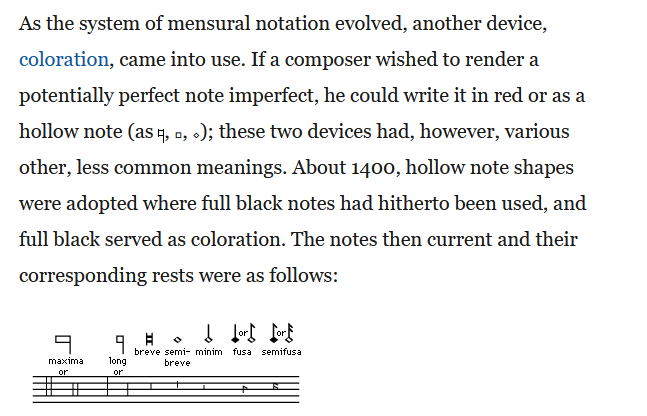 In the copied image of Laurence we can see that the values and note lengths have been diminished about 50% from earlier notation.

The brevis was half as long as the lunga (imperfect) The next division was the semi brevis that optically ressembles to the whole note.

Actually “la breve” in french is the half note and resembles to the minima. Now the next division is the fusa and it had also a hook. This explains that this division - the half value of a breve is called the crotchet referring to the quarter note, division of the half note, while la croche in french refers to the black notation and the english term seems to be derived of the white notation.

CROTCHET, a note which is half the value of a minim, and twice that of a quaver, and is represented thus (figure rythmique noire hampe bas.svg). The origin of the name is not known. It is apparently derived from the French croche; but croche is a quaver, (figure rythmique croche hampe bas.svg) and is so called on account of the hook at the end of its tail, whereas a crotchet has no hook. The French name for this note is noire, the Italian, semi-minima, and the German Viertel, 'a quarter'—i.e. of a semi-breve.

Not the answer you're looking for? Browse other questions tagged terminology history or ask your own question.

15
Where did the British names for different note lengths come from?
12
Where did the symbols ♭ and ♯ originate from, and why those?
8
Where does the tradition of bowing after a performance come from?

5
English Horn Etymology
15
Where did the British names for different note lengths come from?
5
Word for part of a beat
4
How are note durations named in the British system?
10
Who invented rhythmic value names based on fractions of a measure of 4/4 music?
8
Why is Beethoven's tempo so off?