I was listening to Abbey Road but it's just Bass and it sounds like the low E string is a hair flat in a lot of the songs. How did they get away with that?

When I was in the pep band many years ago playing guitar, the bass player told me he did the same thing deliberately. I didn't really challenge him, but I've never done the same even after picking up the bass. Does it somehow give the horns more latitude to be slightly flat, or something? Or is it just superstitious baloney?

In summary, is there any good reason to tune the lowest string of the bass instrument a hair flat?

Thanks for a great question. Being a bassist and an admirer of Paul and the Beatles it was great to hear isolated bass tracks from the Abbey Road album.

In answer to your summary question, there really is no good reason to tune the low string on a bass flat. Doing that defeats the purpose of trying to play in tune. Assuming your bass is intonated properly if you play notes of the same pitch on different strings with that method the notes on the E string will be flatter than the same notes on other strings. Where is the logic in that? I can play devil’s advocate and say why just the E string? Why not all of them gradually slightly more than a P4th apart from each other? Imagine what that would sound like.

As for Abbey Road, I did a flex pitch analysis of Come Together amd Something in Logic Pro and made some interesting discoveries.

The tuning is better and the tone is more pure which makes me think he used his Rickenbacker for this song. The D string is a little flat in relation to the others but aside from that the bass is pretty much in tune.

This has to be the Höfner. The notes are darker and more warbly, especially the low notes. The notes fretted high on the neck play sharp and the open strings play flat so the intonation is off. Also on the E string notes there is a pitch dive after the initial attack, probably a characteristic of the short scale instrument and the hollow body. Check out the pitch analysis of the chromatic descending line in the bridge: 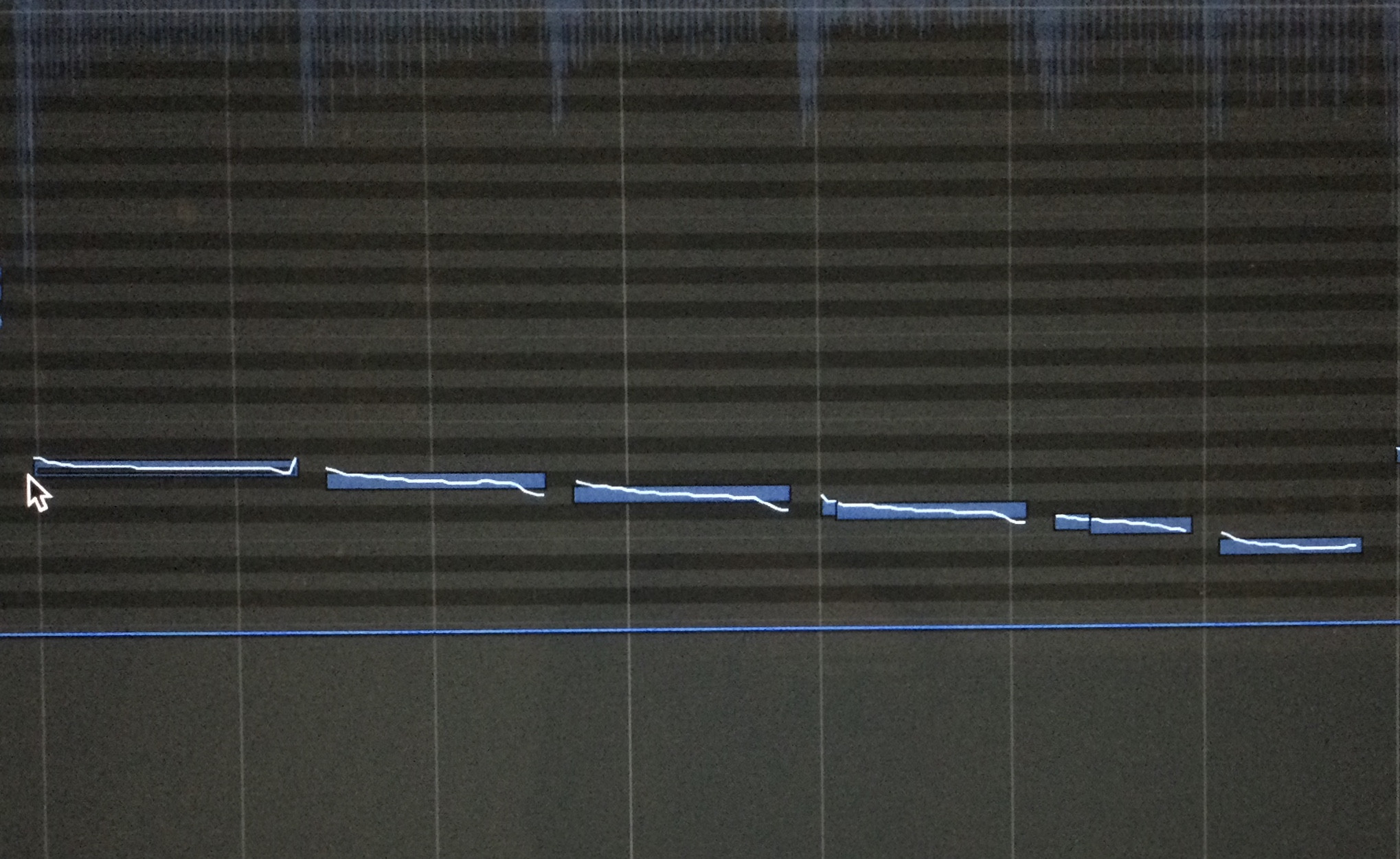 The E string is very flat and I’m sure it is not intentional because the fretted notes are more in tune than the open strings. I’m guessing he tuned using the 5th fret method and that actually might have been a good thing.

I remember Paul saying the Höfner had some tuning issues. It’s amazing how we don’t really notice it much in context though. I’m sure the guitar going through the Leslie and the organ background help it all blend togehter.

In conclusion I know pianos use stretch tuning, where the octaves are tunes at intervals slightly larger than an octave so the low end is a bit flat and the high end is a bit sharp. The reason for this is the unique characteristics of that instrument. It would be pretty difficult to emulate that on a bass. Maybe a bass can be tuned a few cents flat overall to try and match the low end of the piano, say if they are going to be playing unison lines but not just the E string IMO.

The range of the bass never necessitates this tuning complication well known from piano tuning. The "hair" would end up so thin, for a bass, so as to have no effect whatsoever and I have never seen anyone to do this as an explicit tuning step. But it may be implicit in our tuning methods.

I don't find the idea entirely absurd for a fretless plucked instrument with an extra low (and relatively short) lowest string. Am I calling the E string relatively short? Yes I am, it's meant relatively to its thickness. There are two ways to make a string sound extra low. Either you make the string longer, but then the bassists need to grow orchestral player's big hands and perhaps even make uncomfortable detours into their C extensions. Or you alter the weight/stiffness ratio but that makes the string relatively thicker, which is the same thing as making it "relatively shorter".

A string has the shape of a thin cylinder. The thinner it is, the closer it is to a line segment. A line segment has harmonics at integral multiples of the base frequency; a thin cylinder has them a tiny bit further apart of each other. Especially the F2/F1 ratio is affected.

The E string is not normally played in the thumb position because there it becomes a thick enough cylinder that it's no longer perfectly in tune even with its own harmonics (thus sounding a bit muddy). So it usually ends up used only for notes too low to be played on any other string. Its overtones have to be in tune with those higher strings' fundamentals and overtones, while its own fundamental is "free" to be tuned wherever, as long as it is not audibly out of tune with its own overtones (a condition which is only approximately reachable, and not alterable by ordinary tension based tuning). In fact, a common bass tuning technique tunes the 4th harmonic of E to match the 3rd harmonic of A, which would, if executed perfectly, result in the thicker string's fundamental ending up a super-thin hair flat compared to the thinner string's fundamental. Won't that affect all of E, A, D strings equally? Yes it would theoretically all of them, but the thickest cylinder would be affected the most. So if anyone would ever barely perceive or barely measure the effect, it would be probably on the E string.

Won't the same effect be encountered on a cello as well? Well, there are two differences here. One is psychoacoustic. We are better at detecting pitch differences by ear in the cello range than in the contra octave. The fundamental frequency is always physically much "louder" than any of its overtones, but we might have quite a bit more of a tolerance for the fundamental to be a little bit off on the E string (because it is so low), without any such tolerance for the pitch of any of its simultaneously present overtones (also coming from the E string, not just from sympathetic resonance of anything else). The other reason (as Edward has pointed out) is that bowing, as opposed to plucking, provides stable energy transfer to the string, therefore the phase of all the harmonics isn't synchronized among themselves just at the beginning of the tone, but continuously (which is called mode locking). So the harmonics are no longer stretched apart from each other when using the bow, they have to compromise (weighted by energy, thus favoring the fundamental). And the bass gets tuned specifically for pizzicato performance more often than any other instrument in the violin family.

Where does fretlessness come in? Well, any of the above, imperceptible as it is, is sure to drown, on the physical level, in intonation inaccuracies (finger position, finger force angle, action height). But fret positions on a cheap instrument can mess up with intonation even more. So tuning methods which have to rely on anything other than open strings and their overtones will have their own bigger problems to balance than non-integral ratios between harmonics. Tuning is an exercise in compromises, so as to offend the ear the least.

TL;DR - The tuning method matters. When I'm tuning the E string using pizzicato flageolets, or when I'm tuning the bass to match a particular piano, my ear probably locates the pitch of the E string by its overtones more than by its fundamental, and the fundamental does indeed end up a tiny bit flat compared to the fundamental of any other string, while still providing the optimal tuning for subsequent pizzicato play.

Not the answer you're looking for? Browse other questions tagged tuning electric-bass-guitar orchestra or ask your own question.