This may be an obvious thing for more experienced piano players, but I was wondering whether there is a difference between having a single arpeggio symbol that spans both the left and right hand and having two separate arpeggio symbols for each hand. 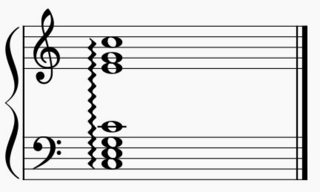 So my question is whether the two notation types are actually the same (maybe due to a limitation in notation software or because of readability), or whether they could notate different ways of playing the arpeggio(s). And if they are the same, are there cases of "parallel" arpeggios? How would they be notated?

I want to thank everyone for clearing up that the two are in fact different.

However, by accident I came across this article, which claims

When playing an arpeggio with both hands on a keyboard instrument a distinction is made between chords where from the bottom of the left hand chord to the top of the right hand chord no note is missing and those where one or more chord notes are missing.

So it seems that the second version with the split arpeggios should be interpreted as a continuous arpeggio based on whether or not the left and right hand chords are complete or not.

This sounds very confusing to me and would require the person writing the score to know this small difference and it would require the player to guess whether or not the notator was aware of this rule. It sounds kind of arcane and prone to interpretation errors. Is this actually widely accepted? I would be happy if you could incorporate this aspect in your answers.

The long one in the first example sounds starting from the bottom note in the left hand and runs through to the top note in the right hand. In your second example, you start and finish both arpeggiated chords at the same time.

No, they're not the same. Yes, if several divided arpeggio lines appear underneath each other, then the arpeggios are supposed to be played in parallel. (In practice, this is almost always one arpeggio for the left and one for the right hand, so you're never going to see more than two such lines.)