Playing 440 Hz, what are the harmonics for a trumpet? For a flute?

Playing 440 Hz, what are the approximate harmonics for a trumpet? For a flute? This to help students understand the differences when those instruments play the same note.

I prefer percentages. Many students have no idea what dB means. Percentages they do understand.

You can find detailed acoustic information on both trumpet and flute (and many others) on the Music Acoustics website for the University of New South Wales. Here are the pages for

In particular, the trumpet spectra

and the flute spectra

Similar information is available in The Physics of Music and Musical Instruments, by David Lapp, Chapter 3, "Modes, Overtones, and Harmonics" (pp. 27-39). (This site appears to be directly related to the UNSW site above insofar as it links to it directly for "further information".)

The first graph is a histogram of the power spectrum for that musical instrument. The first bar on the left is the power of the fundamental frequency, followed by the overtones. Be careful when comparing the relative strength of the overtones to the fundamental and to each other. The scale of the vertical axis is logarithmic. The top of the graph represents 100% of the acoustic power of the instrument and the bottom of the graph represents 80 dB lower than full power (†10-8 less power). The second graph is a superposition of the fundamental wave together with all the overtone waves. Three cycles are shown in each case. 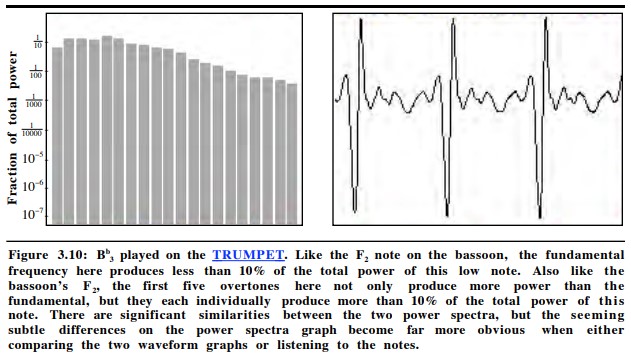 The corresponding flute graphs are not provided, but there are similar graphs for a variety of other instruments.

You may also find another post from SE Music Practice and Theory helpful.

I'm adding this answer to show how using harmonics amplitude to characterize a sound can lead to problems.

The spectrum of a periodic signal can be computed using a Fourier transform, which purpose is to transform a sum of sinusoidal components into a sum of complex exponents of e.

The coefficients of the spectrum are therefore complex numbers. The real part of a coefficient is the frequency relative amplitude and the imaginary part is its phase offset which determines the amplitude of the component at time 0 (more). Most of the time spectrums are shown with only the amplitude information visible and offsets are not mentioned.

If all harmonics started at time 0 at their maximum like a cosine function, offsets would be equal and everything would be simple. That's usually not the case, causing alterations in the waveform. For example, let's create a wave at 440 Hz with overtones this way:

The harmonics parameters are:

As visible these waves don't start at their maximum, except the fundamental (the sum doesn't start at its maximum either).

On the right hand side this is the spectrum as usually represented. I actually obtained this spectrum with a Fourier transform (DFT) of the blue wave. The graph shows only the amplitudes of the components, not the phase offsets.

Now, this spectrum corresponds to an infinity of different waves. It's easy to demonstrate this by reconstructing a wave from the amplitudes only and another from both the amplitudes and the phase offsets. To do this I performed an actual inverse DFT of the spectrum, once using only the real part of the coefficients, once using the whole coefficients: 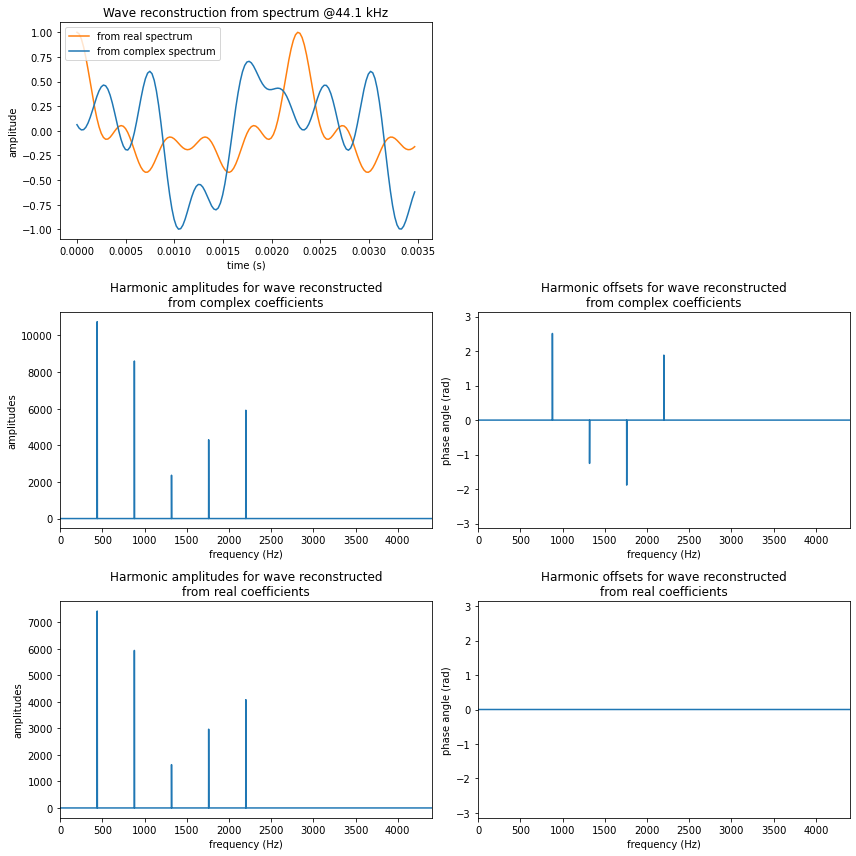 Reconstructing waves from real and complex coefficients of the DFT

The first graph shows both reconstructions, and the resulting waves are indeed different (the blue wave is identical to the original wave)

The other rows show respectively the complex and real spectrums. They are actual spectrums obtained by performing DFTs on each reconstructed wave. They are identical, except the phase offsets.

An infinity of different waves can be constructed from the spectrum amplitudes, just by varying the values of the (usually unknown) phase offsets.

Conclusion: If you want to characterize sounds from their spectrums, you need to know the harmonics amplitudes, as you asked for, but also the phase offsets. Getting the offsets might be a bit more difficult than the amplitudes.

Not the answer you're looking for? Browse other questions tagged acoustics harmonics or ask your own question.

13
Trumpet Peculiar Frequency spectrum
8
What are the acoustics of brass instrument pedal tones?