How to think about this moment from BWV 816

I've been tasked by a textbook I'm going through to make a harmonic analysis of the G major "Gavotte" from BWV816, "The French Suite" specifically minding a handful of questions regarding how the piece modulates. Arriving at bar 17, the B section — having charted some fairly standard common-chord-modulations either to the relative E minor or D Major — I halt at the introduction of F natural, wondering how to view its significance.

As I see it, bar 17 begins on a G chord, seemingly establishing the key of G instead of Em again, which the prior phrase cadences on. What of the F naturals though, first the one that the bass line skirts by, and then the first note of the upper line, bar 18?

Would one consider this a secondary dominant harmony: G7 to a very brief C major decorated with a "sus - 4 - sus 2 - 3"-pattern? (I.e. a very short-lived modulation, I suppose?). Or is it better viewed just as the key of G taking a "mixolydian"-like F natural in order to fulfill some contrapuntal/linear concerns that have been developing in the piece? I realize this is probably a matter open to interpretation, I'm just interested in what may perhaps be learned from the weighting of various interpretations.

(I should add that, with how quickly this piece progresses in a typical recording, I find it quite hard hearing a "G dominant to C" moment being borne out, in the heat of the moment — even with intent repeat listening. But that might just be par for the course with this kind of contrapuntal texture and tempo.)

Audio with notation (timed to Gavotte m. 9 -- start of B section): 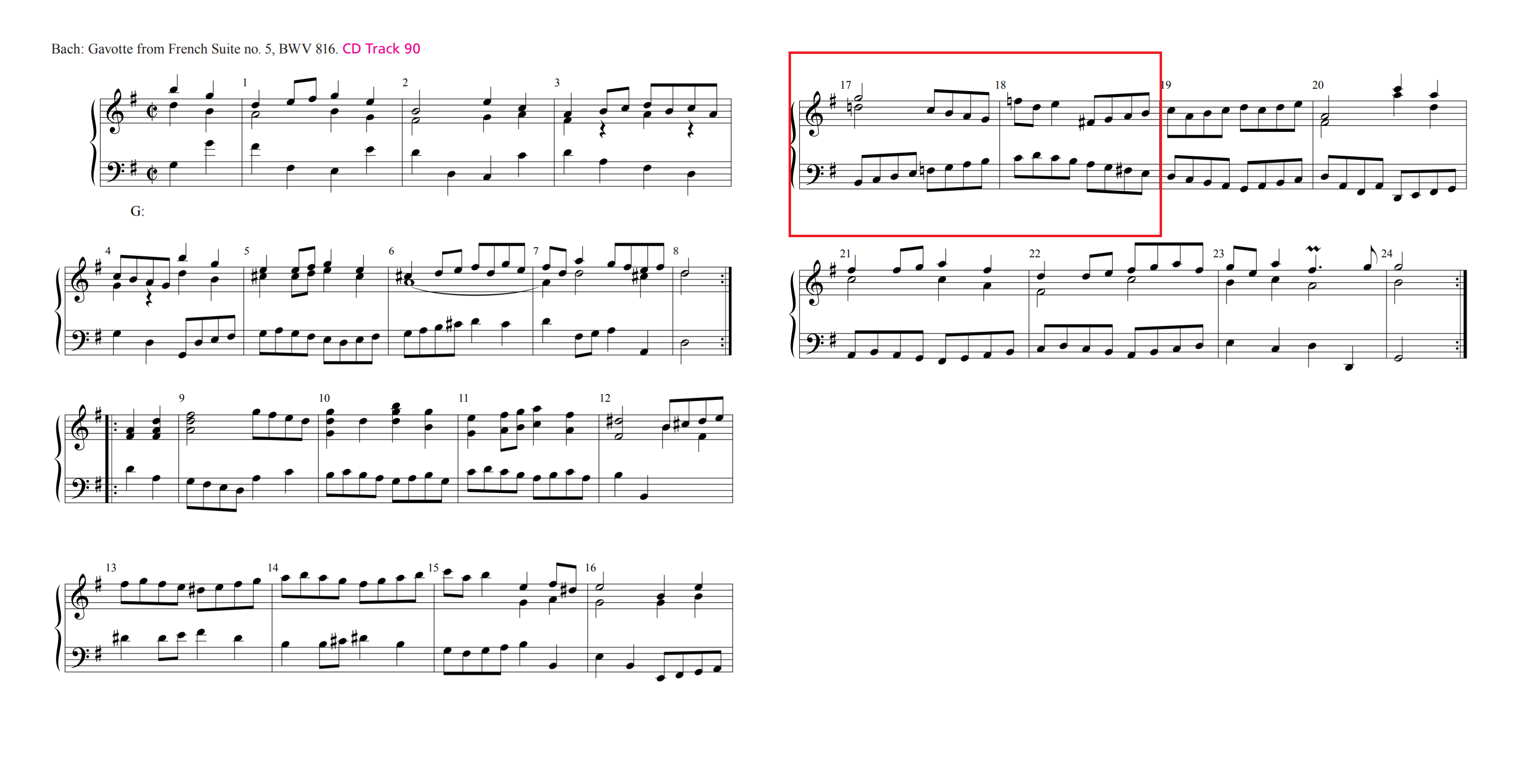 your first thought about bar 17 is correct - it's the secondary dominant of chord IV (it doesn't modulate to C major).

The underlying chord sequence is a bit obscured by the figuration and the avoidance of 'problems', but line 1 below shows the origin of these bars.

Line 2 shows what happens when we decorate the bass line to include the ascending and descending scales. It creates two issues. Firstly, the f-natural in the melody doubles the left hand, stressing the tritone with the b-natural. Secondly it makes the V7 chord seem like it's in second inversion, which Bach's training would have led him to avoid in a situation like this.

Line 3 shows how Bach delays the melodic f-natural, making it an accented passing note. The 'second inversion' chord V7 is 'fixed' through not having the d in the melody at that point (as if it was going to be chord VII - a standard trick when facing an unwanted second inversion), echoing instead the characteristic upbeat figure that we've heard all through the piece. The b-natural in bar 19 was not used in the end; d-natural was instead. Why? If you try the right hand figuration in the second half of bar 19 starting on the b-natural you'll get parallel octaves with the rising left hand.

As to the exact route by which Bach himself got there...we'll never know, but these types of obscured ancestral chord patterns, along with glimpses of problem solving, are typical of his style. 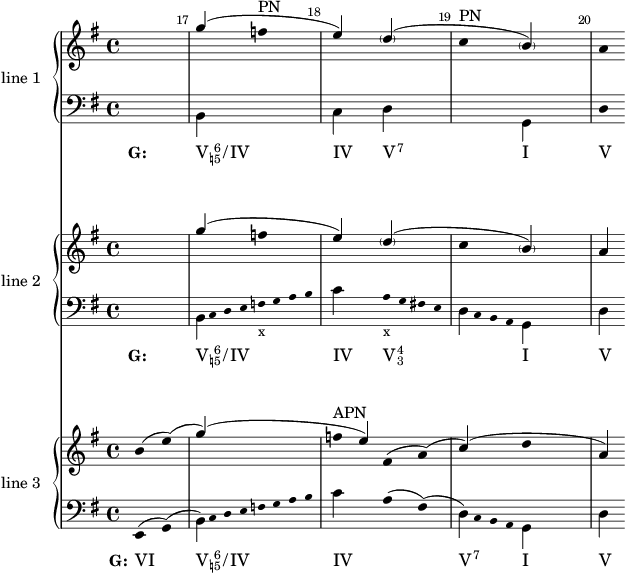 Generally, I would avoid thinking in terms of mixolydian or other modes for Bach. Modes were a historical relic fifty years before Bach was born and it was over a hundred years after he died before they became interesting again. There are so-called 'modal chorales' but this refers to the original chorale melodies, which are rather vexing to harmonise tonally (which is what Bach did).

Allowing, as you say, this is a matter of interpretation, here's mine:

When played at speed, the C major tonicization works well, but when played slowly, the F natural in measure 17 really does sound like G mixolydian. The F in measure 18 makes more sense at either speed.

In the big picture, measures 9 - 16 are the "development" section, where Bach takes us on a tour through a few different keys, and measure 17 is the beginning of the re-establishment of G major. 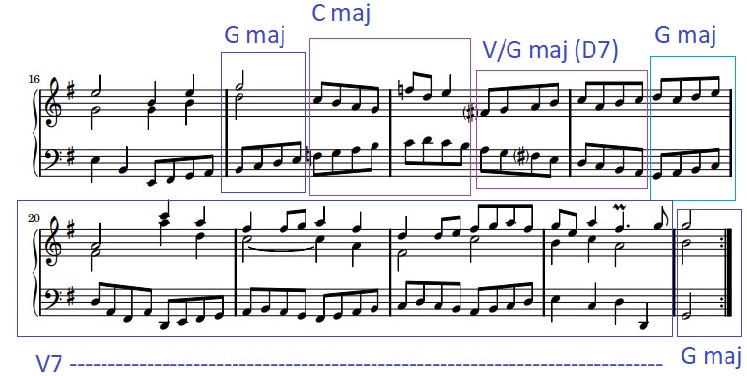 Not the answer you're looking for? Browse other questions tagged harmony analysis counterpoint modulation j-s-bach or ask your own question.

4
Figuring out a modulation
3
How to realize the figured bass of the second movement of BWV 1014?
3
Are these upper voices in this final passage from Handel a bona fide F7 chord or some kind of non-chord tones?
5
Ballades (Chopin) Harmony Question
3
Chromatic Mediant modulation: Can I use an omnibus progression for this?
2
Can you solve these figured bass queries?
1
What is wrong about this counterpoint?
6
Can you tonicize to a chord that's not on the original key?
1
About the rules of inversion in BWV 1087 (14 canons)