3:2 polymeter in a single 6/4 time signature, which accent pattern would be which meter?

I know I could just have it so that there are 3/4 and 2/4 time signatures alternating staves or whatever, but that would probably be more confusing than helpful, especially for the conductor(yes, my suite if you didn't already know is for an orchestra) and in practice, I've only seen this in piano pieces and pieces for bands, and even then, very rarely. Never have I seen it for orchestra. I've seen time signatures alternate across time in orchestral works, but not across instruments. So having a single 6/4 time signature would probably be helpful to the conductor. It would also make it a whole lot easier on Musescore, as I have found that I can't paste when time signatures are alternating staves, at least for piano and other instruments using the grand staff.

But that then begs the question of which accent pattern would correspond to which meter. This is what my intuition tells me: 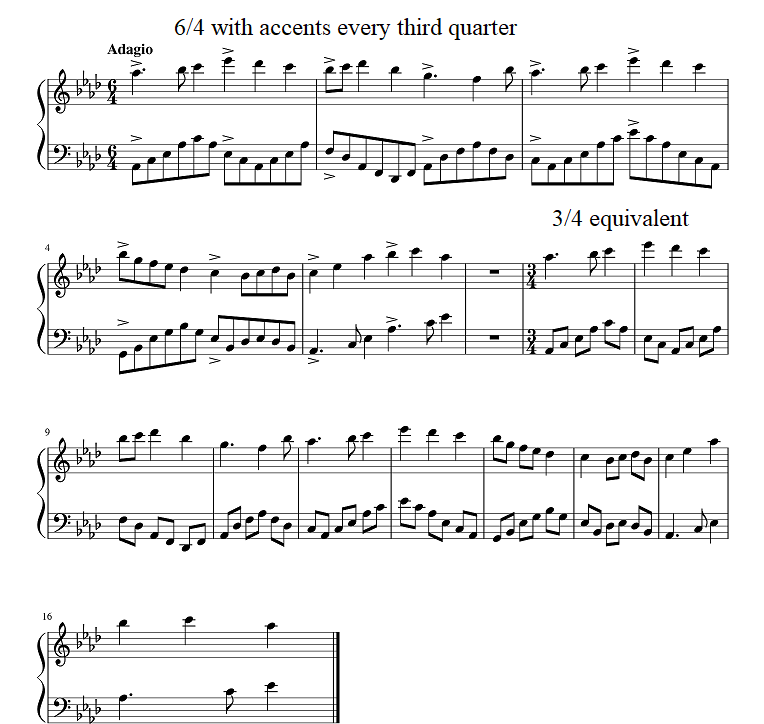 In other words, my intuition is telling me that an accent on every third quarter note will give a 3/4 feel and that an accent every other quarter note will give a 2/4 feel. But then again, for 6/8, it is just the opposite and as I stated before, it would make sense that what applies to 6/8 applies to 6/4. But then again, tempo has to be taken into consideration and for Saturn, that tempo is a slow Adagio. And slow tempos tend more towards individual beats than multiple pulses in a beat, which leads me back to what my intuition is telling me. And while the example I show probably won't be the exact musical material I use for the Saturn movement, it does show the basic concept behind it, that being a high pitched glistening melody over an accompaniment(which in the Saturn movement will probably have countermelody as well as the arpeggios I have in the image).

In addition to accents, you could also use beaming (on the eighth notes) to indicate grouping. Accents and pedal markings also help as does slurring. Some pieces (alternating 3/4 and 6/8 which isn't uncommon) just write 3/4 and 6/8 in each measure. The only difficulty is that 6/4 (like 6/8) is a compound meter and almost always used to indicate triplets.

Not the answer you're looking for? Browse other questions tagged composition time-signatures meter or ask your own question.

3
Meter and time signature headache
4
Time Signature Dilemma, should I change the time signature for my Scherzo?
4
Dual time signature of Alla Breve x2 in Schubert?
9
Why triplets for whole movement rather than writing it in say 6/8?
3
What is typical for a Mazurka besides the accent pattern?
3
Placing rest symbols according the convention of the time signature