What are jazz pianists playing in the background?

When I wanted to learn some jazz piano (coming from classical), I came across recordings where the orchestration had horns playing a more melodic part and the piano playing chords and a more rhythmic part, softly and in the background. But I don't understand what is actually being played by the piano, or how to learn to play in the background myself.

There must be tens of thousands of examples, but just one would be I've Never Been in Love Before. What is the piano doing? It always seems to be this way, that the piano plays short chords somewhat in line with the bass. Although I'm sure many people are able to discern it by just listening, how can a beginner do it?

Let me preface by saying I am not a jazz pianist but I do have a few decades of playing jazz under my belt as a bass player and have spent many hours at the piano writing and arranging music so I think I’m somewhat qualified to answer this.

As you’ve seen in the comments, what the pianist is doing is called comping. Comping is an improvisational accompaniment style that is based on the underlying harmony of the song. Virtually all jazz and American songbook songs that are played by jazz musicians have an underlying harmony and that is the foundation for jazz, whether playing a melody, improvising a solo, comping, or walking bass.

Here are three 8 bar segments of the A section of the tune that you provided as an example. This is NOT a transcription and the chord voicings I provided are only one example of many ways it could be played.

The first eight bars is the basic harmony in both chord symbols and chord notes.

The second eight bars is the same harmony expanded the way a typical jazz pianist would normally do, for example, spreading out the voicings, adding extra chord tones such as 9th, 13ths, etc. Some voice leading has been added to the progression. If you notice, none of these chords have roots because in this style the pianist leaves the foundation of the chords to the bass player to provide.

In the third eight bars I used the same harmony as in the second but applied some typical rhythmic improvisation that a piano player might do when accompanying a soloist. All eighth notes should be played with a swing feel in this example. 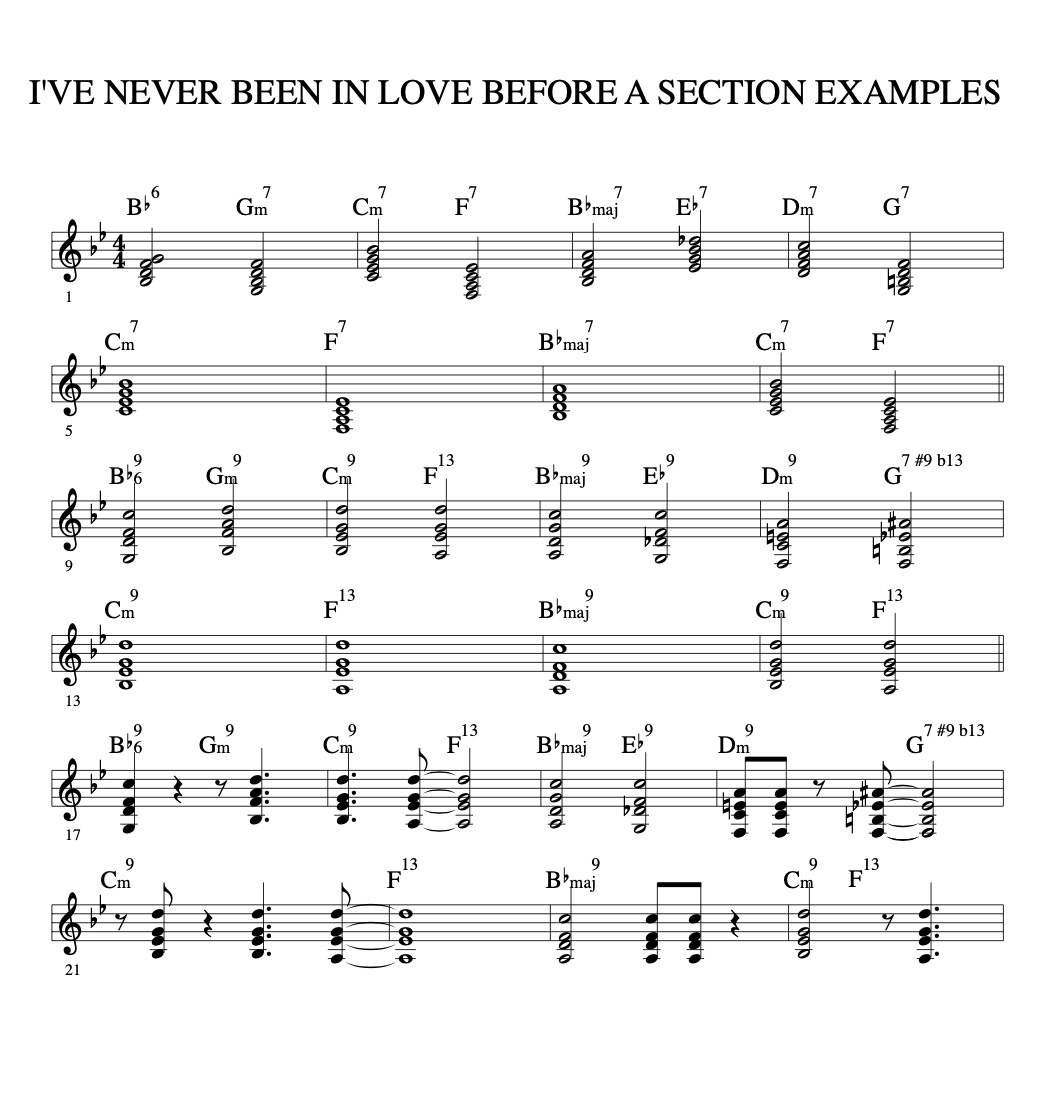 This just scratches the surface bit I believe it explains the function and process to the point where you can understand what is going on and research it further on your own.

One way to bridge the gap between classical and jazz keyboard is comparing figured bass accompaniment to jazz comping.

In the old "classical" tradition - let's use a trio sonata as an example - the bass part gave the actual bass part with numeric figure written above the notes. An instrument like a cello may have played the bass, but it often was double by a keyboard. The keyboardist played the written bass line in the left hand and then using the numeric figures as shorthand notation for chord improvised a harmonization with the right hand. The right hand was free to interpret the exact voicing and figuration (rhythmic treatment) of the chords. If the music was in G major, and the bass note was B natural, and the figure was 6/3 then the basic chord was B in the bass with a diatonic third and sixth above D and G, or a G major chord in first inversion. The right hand then would play some kind of figuration of a G major chord. The top note could have been voiced as either D or G.

A jazz lead sheet is similar to figured bass notation. It gives a line - the song melody rather than the bass part - and short hand symbols for chords. The chord symbols might be something like Am7b5 Dalt7 Gm6. The pianist is free to decide the exact voicings to use and what rhythms to play. The Gm6 could be G Bb D E or Bb E A, etc. Depending on the jazz style the keyboardist might omit some chord tones or add chord extensions. That particular aspect of jazz harmony is probably the thing most likely to cause confusion. With omissions and chord extension applied the keyboardist's harmony may at first glance appear to not match the chord symbols at all! But harmonic conventions exist and it will make sense after a while.

Figured bass accompaniment is not written out, but there are published realizations where someone writes out a specific interpretation. Similarly a lead sheet doesn't provide the exact piano accompaniment in jazz, but you can find published transcriptions of records to see how a player interpreted a song.

To try and get a comment from the horse's mouth, so to speak, I'll start with a quote from a McCoy Tyner interview for Down Beat in 1963, about playing piano in John Coltrane's band, copy/pasted from this dissertation:

A rhythm section is supposed to support and inspire a soloist, and it is a very sensitive thing...Sometimes when John is soloing I lay out completely. Something very important is involved here, I think. The pianist tends to play chords that the soloist knows are coming up anyway. Normally, all the pianist does is try to give him a little extra push in the accompaniment and possibly suggest some new ideas. When the pianist isn't there, the soloist can concentrate purely on what he has in mind with fewer limitations or boundaries. Otherwise, what the pianist plays can attract his attention away from his original thought. So it is all a matter of giving the soloist more freedom to explore harmonically.

(The pianist is a part of the rhythm section, by the way.)

I'd look at jazz piano comping in terms of a few different "dimensions". When listening to jazz pianists, try to think about how, and how much the player is doing in these dimensions.

None of those are limited to pianists, and you could analyze comping guitarists along the same lines.

Regarding harmony, it is only one possible style of jazz where the whole group has to play in a tightly synchronized way from the same music, playing exactly the written chords in the written sequence. Miles Davis moved away from that kind of traditional "song based" jazz and started the modal jazz thing where backing chords don't really change. The rhythm section plays a harmonically static background and is free to concentrate on rhythm and groove, not having to follow a fast and complex stream of chord changes. And the soloist is also free from having to follow pre-written changes and can more freely invent things. An even more free form of jazz is "free jazz", pioneered by Ornette Coleman.

There isn't, couldn't , and shouldn't be a prescription for what to play as a piano player playing in a jazz ensemble.

Piano is unique - along with guitar - in that it can play single notes, chords, and be a percussive instrument, sometimes all simultaneously. (And even be the bass instrument!) As such, it can play in its role as part of the rhythm section rather well.

When someone is soloing, the piano playing can take on many different mantles. In the OP's example, it uses small chords, often syncopated. Almost a pared back route of the harmony of the piece, as if to remind the listener (and player) where they all are in the piece. Just little stabs, not getting in the way of the soloist, purely supporting. Dyads work well here, using, for example, 3rds and 7ths of the prevailing chords, as no more is needed. Giving the space that's required for some solos/soloists.

In other situations, bigger, wider chords work, as a wash under what's being played by the solo player. Or the pianist can work with the drummer or bassist - or both, to play about with the rhythm of the piece, using syncopation, stabs, etc.

Other times, the pianist might be having a conversation with the soloist, and/or throwing ideas - rhythmic and/or harmonic, out there for the soloist to pick up on, and react to in their playing.

There are so many different ways to be the piano player in an ensemble, depending on many factors - the song itself, what the make up of the band is, who's soloing, how they're soloing, and mst times, even if the piano player uses stabs, as mentioned earlier, they won't come in the same places as the guy put the last time he played. That's one of the facets of playing jazz, 'going with the flow' means each performance can be different and new.

This list is not nearly complete, but afore mentioned pianists are all terrific players, soloists, compers, and all have huge amounts of voicing vocabulary that we can garner and gain from!!

5
Latin jazz: anticipated chord change on last beat
13
Best Way to "Learn" Jazz Piano
1
Complete beginner question: Jazz guitar
5
What are these pieces teaching actually?
0
I am planning to learn piano songs using only guitar chords, what chords should I learn since there are so many of them?
10
13 Chord Voicing Without Root, 3rd or 5th
2
Tips for hearing/transcribing a piano riff?
1
Need help with reading this fragment from piano sheet
2
How do I learn to improvise outside of the jazz realm?
0
To add chords to a song, is playing the chord that carries the melody equivalent to playing the melodic note as note 1, 3 or 5 of the chord?