How to you know which finger/key to press for next note in Piano? [duplicate]

Ask Question
Asked 1 year ago
Active 6 months ago
Viewed 1k times
7
This question already has answers here:
How do you know which finger/key to press for the next note on Piano when thumb is not on C? (8 answers)
Closed 12 months ago.

When your thumb is pressing C, then see next note is E, do you memorize the pattern that C and E is skipping one finger and in this case the middle finger to press E? Or do you look at the key E and press it?

Either way, how do I practice this? I am struggling to press the correct subsequent keys.

When particular notes are literally under your fingers, there's no need to look. It's not like they've moved or disappeared!

As a beginner, you can keep your hand over the five notes, and get used to the idea that one key is for one note.

Later, you'll need to change that idea, as you will be stretching out your fingers, and moving your whole hand up or down, to reach notes that are out of that first comfy span. But for now (I assume you're a complete newbie), hover over the five keys, but don't consider that that will always be the way.

There are standard finger patterns for specific scales, but you won't always be playing just the scale/key - you could be playing notes in any pattern. So you need to change the position of your hand in a way that the progression of the fingers stay (more or less) the same but is just transposed.

As an example: Consider the general finger pattern (right hand) for the A major scale:

[FINGER PATTERN MARKED BY ME ACCORDING TO MY JUDGEMENT] 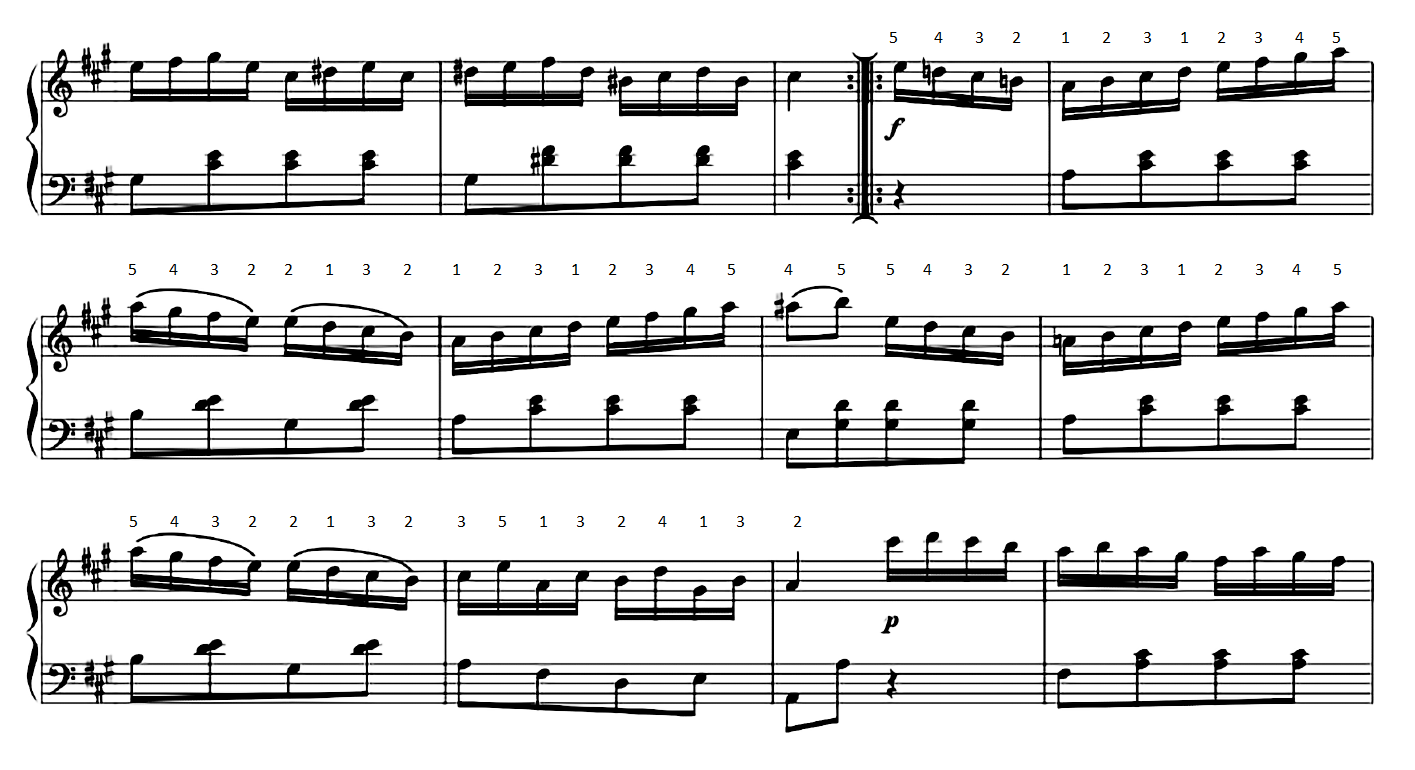 Note that the key signature suggests this part to be in the key of A Major. Therefore, according to the standard rule, the first note (in the bar where the numbering starts), which is an E, should be played with your 2nd finger (index finger). However, the score suggests to use your 5th finger. Here, however, you could do either - use your 2nd or 5th finger but using the given finger pattern makes it a bit convenient. Obviously it's not in accordance with the finger pattern rule of playing the complete A major scale, but we may make this change since there is provision for it in this situation: we can save ourselves the trouble of switching from the thumb to the middle finger (while moving from D to C#) since that isn't necessary - owing to the notes that follow.

Moving further, you'll see that the 5th bar suggests using your 4th finger (right hand ring finger) to play the next higher A# followed by your little finger playing the B. This is neither in accordance with the finger pattern rule for the chromatic scale nor the A major scale. However, shifting our hand across the octave to use the thumb (1st finger) instead of the 5th wouldn't be very efficient as we have to come down again in the next bar, so it's more efficient to just extend the hand a little bit and use the fingers which are closer to the notes, as we'll easily be able to position our hand to play the next pattern - which begins with the 5th finger on E. In fact, WillRoss1’s second comment contains an even better technique for this segment.

If you follow the score on a keyboard, you'll be able to make better sense of the answer.

This is NOT THE ONLY acceptable and definitely not the most efficient finger pattern. A more experienced pianist would be able to come up with something better. My aim here is just to help you get a rough idea of how the process of determining the finger pattern works.

In practice, you follow the standard patterns as and where they work and make judicious transitions and modifications to fit a certain finger pattern over a certain segment of notes in a way that “makes sense”.

You can start off by placing your hands in a fixed position. Lets take the Right hand for example. Place the thumb on C, Index finger on D, Middle finger on E, 4th Finger on F, 5th finger on G..

If you have a notation, then you may first practice slowly with this hand position. It's totally okay to look at the keys! With time, you will get used to playing notes without looking at them. Relax your hands, read the notes and play. Later on you can practice more complicated movements that include keys across the keyboard.

There are children - and students and adults - who always go the same way they have been taught: they want to follow the steps of a master like a disciple.

There are are others who want to search their own way, may be they struggle more, but they will keep their solutions better in mind, the way they’ve found by trial and error, like explorers and inventors.

As a beginner it may make sense to use always the same finger for the same key and even the same note.

I was teaching 100reds of children in small groups - actually the purpose was not to teach them keyboard, my goal was that they could understand the basics of music (scale, note names intervals and chords through learning by doing).

There were children who played all notes only with the index (like a xylophone or on a tablet. This technique isn’t benefiting for Piano playing, of course. There were others who play a triad like c,e,g with fingers 1,2,3 or 2,3,4.

Probably you won’t find these fingerings in any keyboard book. But what I want to say:

Actually every fingersettings is possible as long as you are at ease and feel comfortable. The danger to get bad habits is smaller than to feel inhibited by wrong sorrows about uncertainty and doing wrong.

M. Feldenkrais was “teacher” of Yehudi Menuhin, Moshe Dayan and the president of the WHO.

He has written down his philosophy of learning in his book the “the elusive obvious”. This means we have to recover what is natural.

For example, let's assume that you have a song that goes:

In this song, you would have your 2nd finger play E because you can see you want to ascend up to a higher C, and it would make sense to stretch out your hand to reach all the notes with one position. Later on, we have a switch from 1 to 3 from F to E because we run out of fingers (also because this is a very important finger pattern in scales).

Alternatively, if we have a song that looks like this:

We could avoid stretching our hand because we can foresee that all the notes would comfortably be in a pentascale position (in this case, C D E F and G).

As you practice, this will become more and more natural, though guidance from your pedagogue will be crucial.

10
How do you know which finger/key to press for the next note on Piano when thumb is not on C?

12
Should I lift my finger before I hit a key when playing a piano?
29
Which fingering to use when playing the same piano key twice in a row?
2
How can I increase my note reading and finger strength?
5
When learning scales, is it important to know which key is being pressed when?
3
How do you learn to read ahead when sight reading for piano?
8
When you look at (piano) sheet music, how do you "think about" which notes are being referred to?
1
How to sight read piano sheet faster in any key?
4
Piano: When you change hand position, how do you coordinate finger with note on paper?
10
How do you know which finger/key to press for the next note on Piano when thumb is not on C?
6
How Do I Know Which Piano Hand Position in the Following Exercise?