How to characterize voicings of "cowboy chords" on guitar?

As set forth in the title, how might might one characterize voicings of "cowboy chords" on guitar? And is there a systematic way to characterize the voicing of these and other chords?

In the E-chord example below, I found it most conceptually satisfying to pull together the first three bass notes that make up the E chord (E B G#) and treat the remainder of the notes (E B E) as doubled or tripled. After running through the different inversions and drop-2 chords thereof, the first three bass notes that make up the chord appear to form a drop-2 chord of the second inversion. But there are other ways to do it that are conceptually about the same. For example, the E-G#-B triad on the first three lines of the staff form an E chord in root position. The rest of the notes can be seen as doubled or tripled.

I don't want to overcomplicate this! But I am trying to understand a systematic way for characterizing different voicings. Starting from the bass notes seems to be a good way to start. 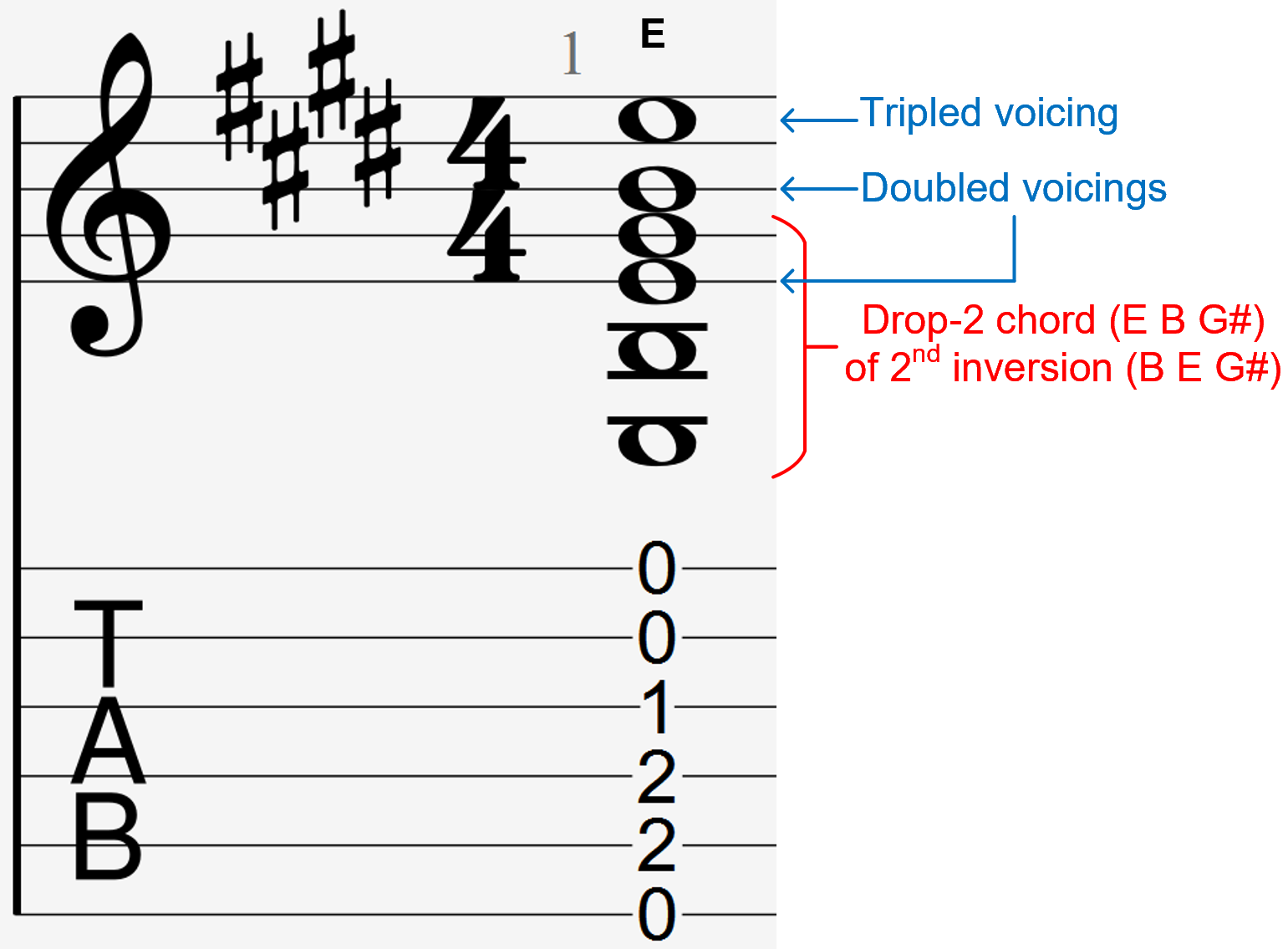 You can characterize them however you like, there are plenty of comparisons and differences you can find among them. For example, from the 5 CAGED shapes, you an say the first 4 notes of the E A and D shapes all contain Root, 5th, octave and M3rd up an octave from bottom to top, assuming you are not playing the low 5th below the root on the A and D chords. Even more simply, you can characterize them by saying they start with a P5, or that the 3rd is actually a 10th.

There is plenty to observe but it’s up to you to decide what is relevant to analyze.

They're all basically 'open' chords. As such, they contain, essentially, open strings which are part of the chord.

The voicings are, or can be, quite different. As John points out E A and D all have 1,5,1 as their lower notes. That's unless you decide to play them in 2nd inversion - quite permissable, but rarely featured in guitar sites - in which case, A and D can also be played using the open 6th and 5th strings respectively. D also works in 1st inversion with bottom string, 2nd fret.

Still counting as cowboy chords, G and C are somewhat different. With G, the lower part contains M3 (on 5th string), and then players are split between those who prefer another M3 on 2nd string open, or the harder sounding P5 on 2nd, 3rd fret.

C is probably the most interesting, though. Keeping it simple, it's a 3 finger chord, with root on the bottom (5th st. 3rd fret), but also works with open E underneath, or G on bottom string, or G on top string, or any combination of the above!

Not wishing to go into minors, sevenths, et al, suffice to say there are many ways to 'characterise' all these chords, but would there be any useful point? They are what they are - open, or cowboy chords, that all work well, particularly on acoustic guitars (yes, round the campfire), partly due to their slight extra volume and ease of playing. Spicing them up is a rather different (and interesting) question.

This site https://bartoszmilewski.com/2020/05/25/guitar-decomposed-3-moving-sideways/ does a great job of exploring the relationships between the CAGED shapes. The author is a noted programmer and mathematician who is applying some of those skills to guitar.

In terms of a system to analyse the voicings, if looking from the bass I tend to think about the triad and whether it is closed (all voices as close as possible on a music stave) or open (where the middle voice jumps up an octave). Everything extra to that is a doubling in this case.

For a more comprehensive system, the guitarist Ted Greene did some very interesting work on categorising all voicings and chord types which he called his V system. It wasn’t published in his lifetime but a few of his former students have put some great material online. Link: https://www.tedgreene.com/teaching/v_system.asp

I think there are really just two basic voicings of these chords (the open EADGC chords.)

G isn't exactly all close, depending on how you play it 320003 or 320033 there is a gap at the top, but by comparison to the open voiced chords the lower tones are close.

Notice that when considering those chords as just to types of voicings the various chords within each group are just found by across the strings up/down by perfect fourth. This why I don't like the "CAGED" system. It obscures the simple fact there are two basic voicings - or chord shapes - open and close, and you just shift them over the strings by fourths to get all the basic "open" (as in open strings) chord, sometimes called "cowboy" chords.

For these chords I don't think it will help much to thing in terms of drop voicings or whether voices are doubled. The voicings are really about what is physically easy to strum rather than voice balancing or the sonic qualities or voice spacing or chord inversion. If you're dealing with jazz guitar chords or playing in a classical style, those things would be important, but not so much with "cowboy" chords.

Yes, there is a sonic difference in an open E versus open G cowboy chords, but IMO that's just a side effect not a specific choice for voicing. In your typical "rhythm guitar" playing, or strumming along to accompany a singer, cowboy chords are just the standard, convenient way to strum chords. There isn't any voicing significance to open E having tripled root while open A has doubled root, etc. etc.

1
How to memorise suspended & inverted chords?
2
technique(s) for developing ninth chord voicings on guitar
5
Confused about C6/9 guitar chord
8
How to accompany with piano in latin music when given only chords?
8
Is Alberti bass really a type of arpeggio?
3
(How) Do the terms "open" and "close" position apply to chords with multiple doublings?
0
Roman numeral analysis of chord with non-chord tone in bass
3
How could these chords in Debussy's "Reverie" be analyzed?
2
How to conceive 1st inversion chords: intervals vs. note-names