How does one isolate a specific tone from an audio file?

What im trying to do is if for example if i have an audio file where a person says "Today", i could isolate a sound like the "o" sound and extend it as a tone for any length of time.

Any help would be very appreciated. Thank you guys for any help in advance.

software tone sound
share|improve this question
edited May 23 '13 at 19:39

This could be done with a piece of hardware or software called a sampler, but you should be able to accomplish the same with any waveform editor--or a combination of the two.

Essentially, you will be "cropping" the audio file in order to isolate only the tone in question, and ideally in a way that sounds the same both at the beginning and end of the fragment. Then you would simply loop that fragment.

The graphical equivalent of this would be to start with a family photo, crop it to your head, and then tile the result as your desktop background. (Sorry, couldn't resist.)

Samplers in particular are used for playing back loopable fragments, often with some special other modifiers like pitch, attack, release, and decay modulation. You might use one to make a special sound for your MIDI keyboard consisting of a number of individual sounds layered and looped in a unique way.

Most transcription software will automatically loop; or at least easily let you loop a section of audio such as someone making the "ooh" sound in "Today". It will do this easier than a full-blown waveform editing program.

Doing this inside transcription software will save you from having to manually edit the track, loop it, etc. These programs will allow you to simply highlight the section of waveform you like, and through most defaults automatically start playing back the audio looped over and over. And over.

This can be done as suggested in Audacity and other audio programs, however I find it's just simpler to highlight the selected part of a waveform, hit the space bar and hear that section of audio over and over again.

My experience with this is mostly in Transcribe!, or Capo, but they all act similarly.

Now, when you want to export this away from the transcription software:
However, the audio will probably "clip" in the sense that the noise starts over, and will have an abrupt beginning. In that case, copying and pasting the audio clip inside an editor and Cross-Fading should leave a stream of vowels as indefinite as you like. Or any pitch for that matter. 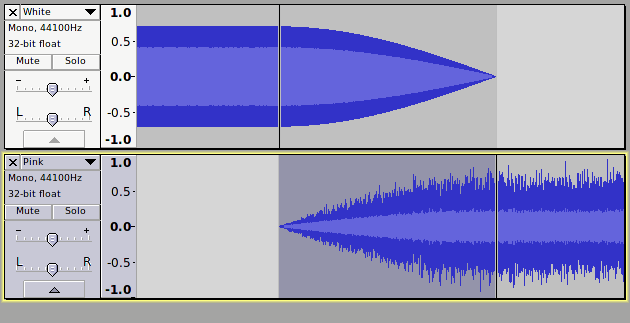 Using a plain waveform editor would be a good idea if you were dealing with a 'pure' tone — essentially, a single sine wave, or perhaps a small number of sine waves such as used in DTMF. The sound of any human speech vowel is more complicated, and the kind of operations that are simple on its waveform tend to introduce artefacts (which you may or may not care about.) Consider that a vowel comprises of many frequencies, with slightly different wavelengths, and it's very difficult to cut out a piece of waveform that would contain a whole number of the waves you care about, and if you get a fraction of any of them, an audible crackle is likely to happen at the point the ends of the looping window are joined.

Typically, if you want to stretch a complex sound like that while reducing the editing artefacts, you'll want to start by splitting the original sound into its frequency spectrum using Fourier transformation. The selected part of this can then be mechanically stretched (or alternatively, shrunk, if you wish) by repeating some or all frames a few times, as dictated by the factor of stretch, or skipping some frames according to the factor of shrink, and the modified spectral form then re-synthesised into a new waveform. This way, the individual frequencies of different wavelengths in the loop window will end being re-generated, and it won't matter that the length of the loop window was not a whole number of some (or, well, almost all) of these waves. You can think of the process as adjusting the phases of these waves separately at each clipping window rollover point.

Some sound editing packages include tools for filtering out crackling artefacts. You can generally assume that these will be performing Fourier transformation behind the scenes, detect short high-volume events and suppress them in the spectrum, and then re-synthesise the waveform.

Not the answer you're looking for? Browse other questions tagged software tone sound or ask your own question.

5
Guitar audio interface matching tone of my old amp, and a problem
1
How are pitch and tempo related to harmony
1
What attribute of sound will be identical (or close to) for multiple people receiving same input from different locations
1
Matching time in an audio file to bars in sheet music
2
How to simplify a midi file similar to the same limitations of a player piano
6
How to distinguish light vs dark tone?
9
How to generate the tone of a specific waveform?
0
Properties of a very low pitched natural horn?
7
Synthesized polyphonic sound completely different from the “real” one