When a string is touched at a certain node point, a harmonic is produced. The open string produces a particular note, say one octave below the first harmonic. Why does that open note (which contains other harmonics - strongest usually being the first) sound so different? More so, the fretted octave note (same pitch) sounds very different in timbre from that 1st harmonic. Why? Is it down to its own harmonics?

Your first sentence holds the key - it is actually not correct.

Interestingly, the reason it sounds so different is because the opposite is true - touching at any of the node points removes harmonics.

Row 1 shows an open string vibrating - the diagram highlights the fundamental, but the other harmonics are present (see this question for an indication).

Row 3 shows what happens when the string is touched at the halfway point. All harmonics that would vibrate at the 12th fret are removed, so we are left with all the even multiples of the fundamental.

Similarly Row 5 shows what happens when the string is touched at the 7th fret - the fundamental and all harmonics that would vibrate at the 1/3 length are removed. 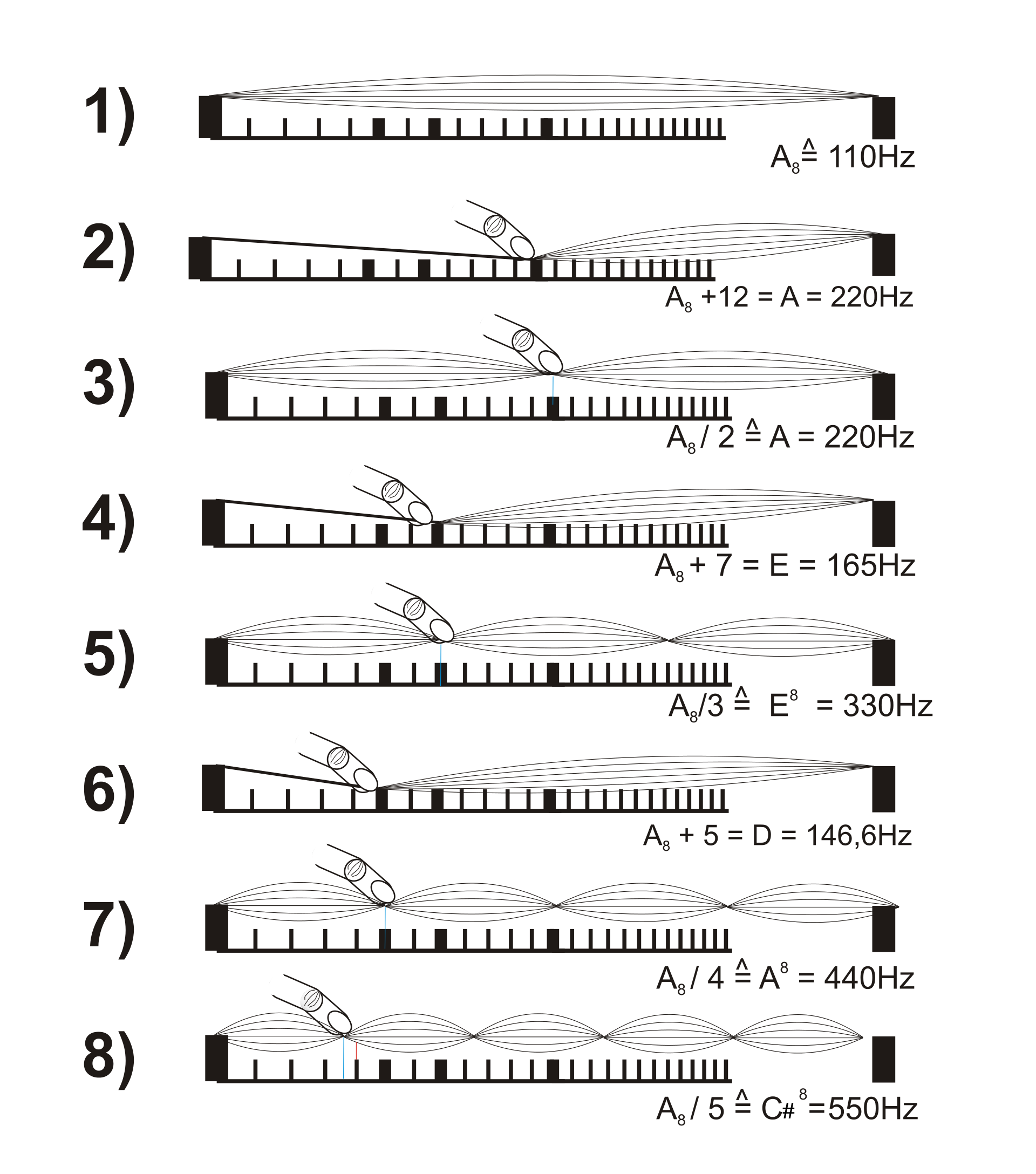 The idea that touching a ringing open string exactly halfway will create harmonics that sound identical to a fretted note one octave higher, relies on three assumptions:

However, none of these assumptions is correct.

Touching a vibrating string exactly in the middle will only remove all odd harmonics completely if the object that touches the string is infinitely thin, infinitely hard, and immovable. Your finger isn't any of those things, so it removes the odd harmonics only partially, and to varying degrees.

The open string produces a particular note, say one octave below the first harmonic. Why does that open note (which contains other harmonics - strongest usually being the first) sound so different?

More so, the fretted octave note (same pitch) sounds very different in timbre from that 1st harmonic. Why? Is it down to its own harmonics?

The list of harmonic series of these two notes are the same. So the difference in sound must come from somewhere else: the proportions of the harmonic components, their decay with time, and the attack.

I believe the main difference comes from the fact that you touch the string with a finger (as opposed to stiff, metal fret), that is soft and can absorb the vibrations. Try the two following things:

When you play a normally fretted note, the finger, though behind the fret, still absorbs the vibrations a little. For this reason, if you play a harmonic and remove the finger from the string, the sustain might be a bit longer than that of a fretted note.

One more characteristic of the harmonics is that you just touch the string with your finger. The finger is soft and doesn't provide a firm pivot point. When you pluck the string it has much more freedom to move w.r.t. the finger, as opposed to string pressed against the fret. I believe this may affect the sound of the attack, which is substantial component of the perceived tone.

You are asking many questions in one and it is, as you put it, all down to harmonics.

One thing missing from your description and from the other answer(s) is the attack. When you "fret" a note versus playing the harmonic you will get different sounds based on how the string is set in motion. As Doktor Mayhem points out in their answer initiating a true harmonic removes notes from the spectrum. However, what is not entirely correct in the figures is the fact that this can be accomplished with the fretted note too based on how it is attacked.

You claim in your main question that the fretted note at the 12th fret sounds different than the first harmonic which is the same note. Are you sure this is always true? A deeper analysis of this belief might demonstrate that is not. Rather, you might want to experiment and see if you can create the same tones with each. I think that the fretted note and the harmonic do contain some different physics that make them different across the entire spectrum of experience. For example, (1) for the fretted note the string may rub against the fret causing slight increase in brightness, (2) the harmonic is free to vibrate over the whole string which may alter the time dependence of the harmonic content differently than the fretted note. The best analysis would be an FFT of sound captured in each case and compared.

When you produce a harmonic, you only temporarily mute the string at the node location. The finger is immediately removed when the string is plucked. From that moment on, the string does not have a node there and is free to vibrate. So that is to say, all the modes of vibration of the open string (and all of its harmonics) are potentially available, and can get excited, coloring the note.

Moreover, the section of string below the node is also involved in producing the harmonic, which is not the case with the fretted note. The standing wave is traversing the entire length of the string.

The open string is also unobstructed by frets. Open string notes on the guitar sound generally different, more "chimey" or "harp like". When you fret a note at, say, fret 8, the string passes very close to fret 9, which limits the vibration. When you play a harmonic version of a fretted note on the same string, approximately the same section of the string vibrates to produce that note as in the fretted case, but that section of the string is nowhere near the fretboard. Its mode of vibration is completely unobstructed.