Ask Question
Asked 8 months ago
Active 8 months ago
Viewed 336 times
0
Closed. This question is off-topic. It is not currently accepting answers.

I am a guitarist learning jazz and our combo leader has given us Bolivia by Cedar Walton. I can play the head and the comping (barely) but I am completely lost about improvising in the A section. I can "steal" some phrases from Cedar Walton's solo but I would appreciate a harmonic analysis of the tune to explain the decisions made there.

Here is a decent chord chart from the iReal Book: 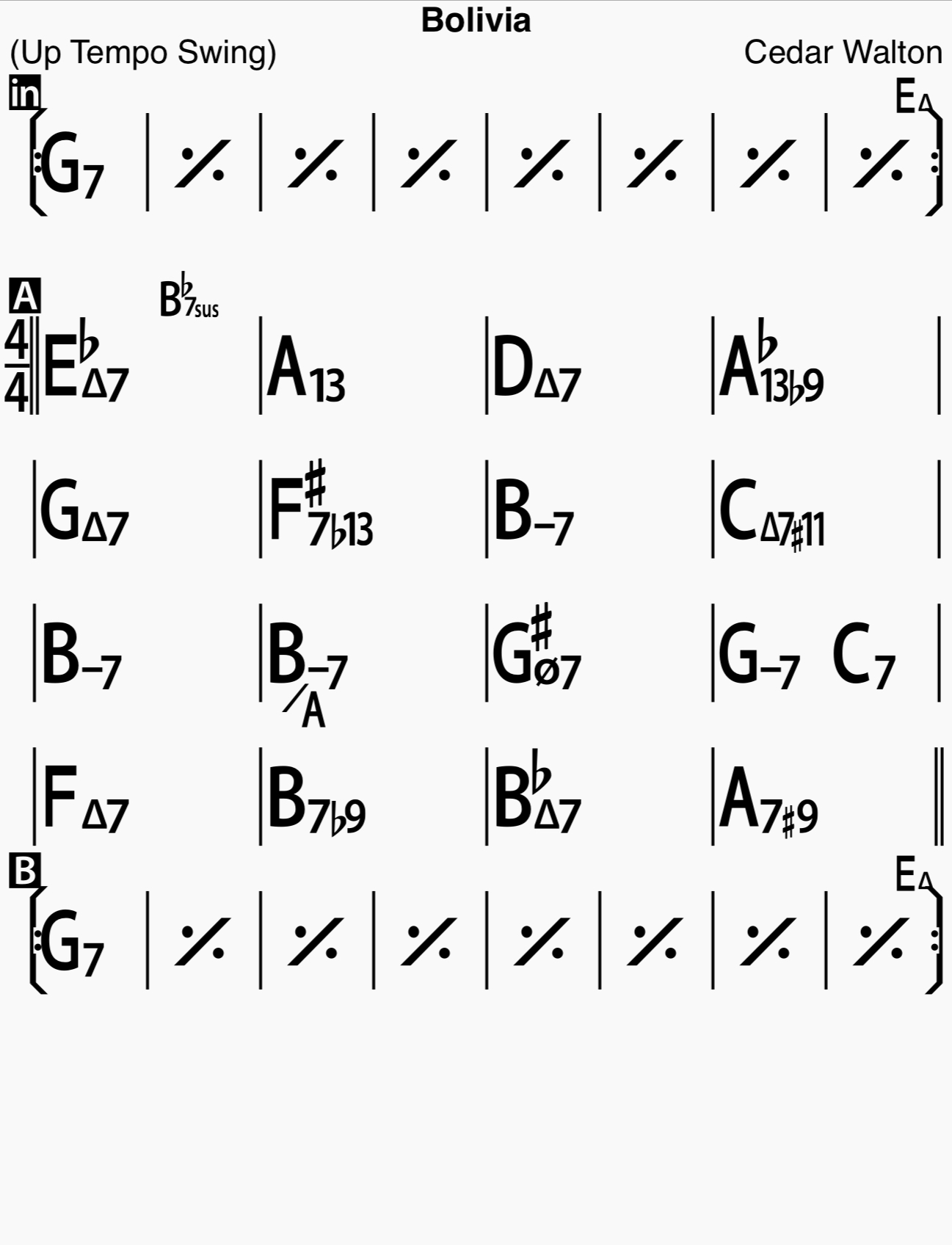 This is not an overly complex tune but it is highly chromatic with several substitute and secondary dominants and requires advanced skills to navigate it well as an improviser.

The basic way I approach the A section is that it is in 3 (or 4) different keys, Eb, D (Bm), and F. I say 3 or 4 because D and Bm can be thought of and justified as one key or as two different keys. My preference is to think of it as all D major with a good amount of time spent on the relative minor chord.

The Eb is only one bar. The Emaj7 leading into it is only a 1 beat passing chord played during the melody.

The A13 is a V7 to the new key of D so a bar before reaching the Dmaj7 chord you are already in D.

From there you have Ab7, a substitute dominant to Gmaj7, the IV chord.

Next is a secondary dominant that resolves, F#7 to Bm7 V/VIm to VIm. At this point it would be acceptable to think of Bm as the relative minor OR a modulation to the key of Bm

The next chord, Cmaj7#11 has a kind of bII Phrygian relationship to the Bm. bIImaj7 chords are common in jazz in both major and minor keys. Beatrice by Sam Rivers and Speak No Evil by Wayne Shorter have examples of this chord.

Then back to Bm7 and Bm7/A for two bars. If you noticed, the melody starting on the Gmaj7 till now (6 bars total) has been all notes from a D major triad tying all this chromaticism together.

The following chord, G#m7b5 can be thought of in two ways. First, as a #IVm7b5 in D, a chord often used as a substitute reharmonization for either diatonic IIm7 or IVmaj7 chords. You can also think of this as a diatonic chord in Bm Dorian, the VIm7b5 chord. Jazz players tend to think in Dorian a lot when playing in minor.

The B7 is a substitute dominant to the IV, Bbmaj7.

The A7 is a secondary dominant to the VIm in F which never resolves, or does it? G7 is like a Dm6/G so there is a sense of resolution going to the next section.

It all adds up to this: 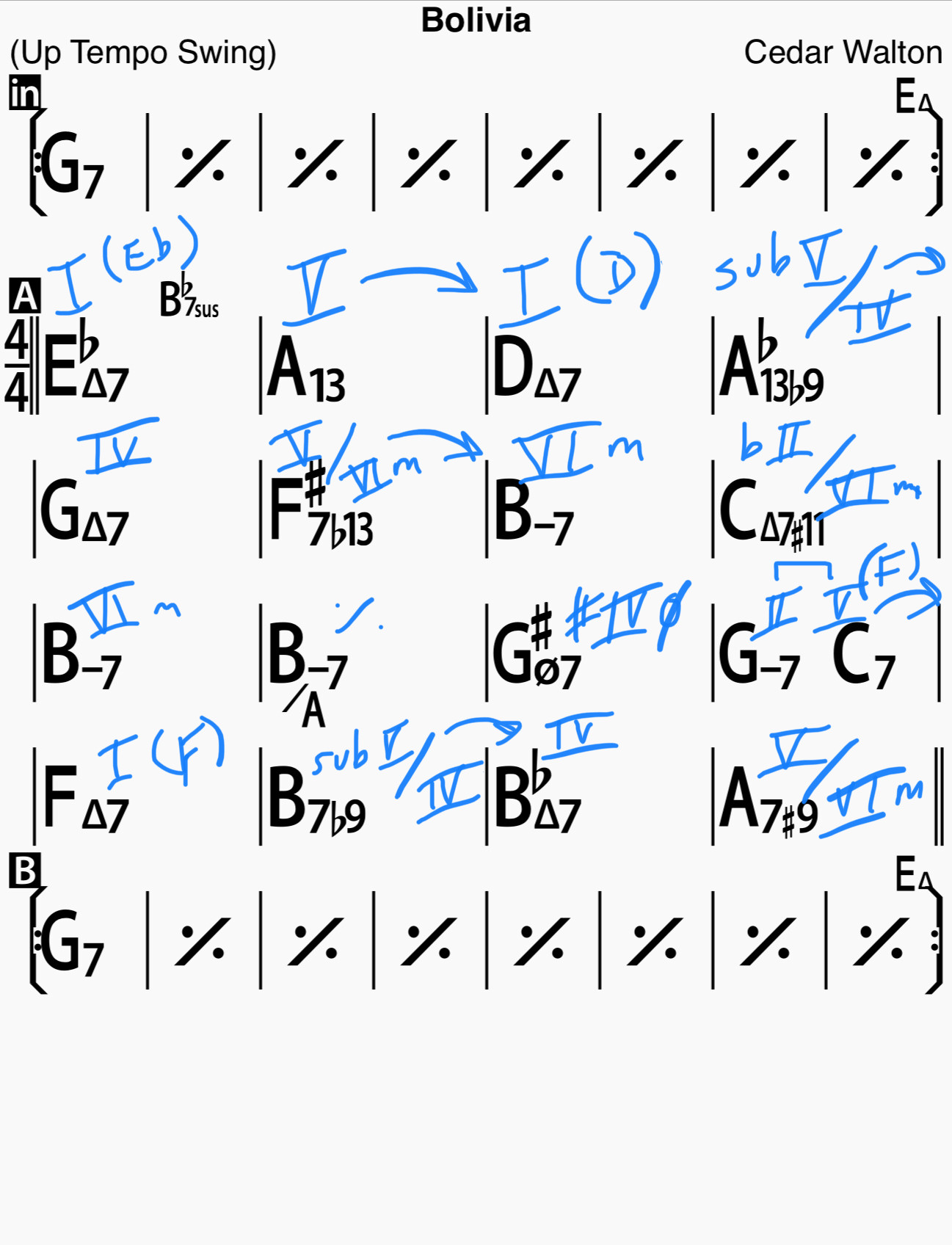 This tune is a favorite of mine and I have some great memories of Cedar, I used to hear him regularly at a NY club called Bradley’s in the 80’s and 90’s and even got to meet and chat with him a bit. I also had the honor of playing bass with him in a trio concert when I lived in Santa Fe, NM in the 1990’s.

Not the answer you're looking for? Browse other questions tagged jazz analysis or ask your own question.