How should this half-diminished seventh chord from “Christmas Time Is Here” be analyzed in terms of its harmonic function? [duplicate]

Ask Question
Asked 5 months ago
Active 5 months ago
Viewed 412 times
3
This question already has answers here:
How would these chords from “Christmas Time Is Here” be analyzed? (2 answers)
Closed 5 months ago. 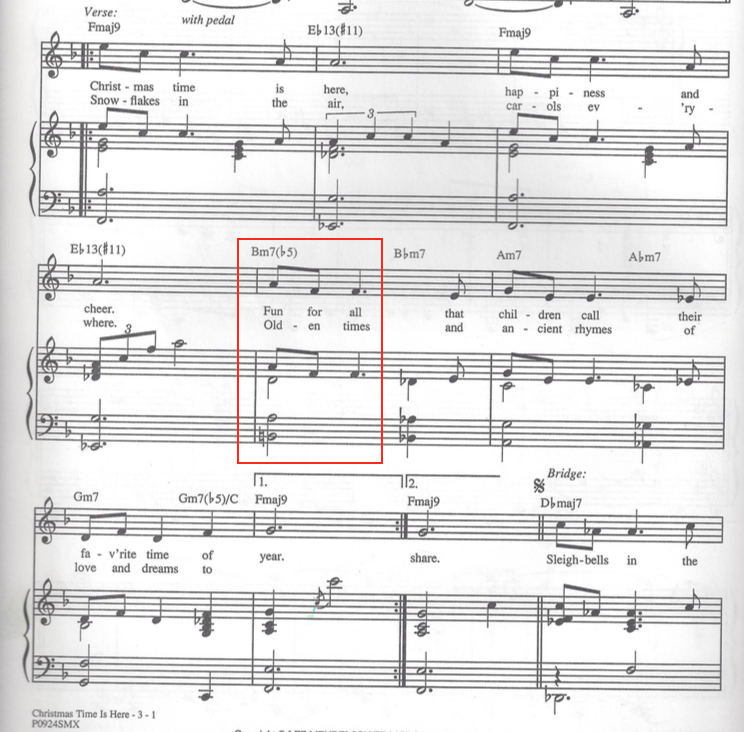 I'm working on an analysis of Christmas Time Is Here, which is in F major.

I'm trying to determine the best way to analyze the Bm7(♭5) chord circled in the image. I have 3 explanations right now:

Do any of these seem to be the best way to go about analyzing the chord? Is there a better way of analyzing it that I haven't included? I'd love to read some thoughts on how to explain the function of this chord in the music. Thanks in advance, and happy holidays!

I see and jazz musicians use the #IVm7b5 (Bm7b5) mostly in one of two ways:

In the case of this song, it actually is a bit of both. You can replace the Bm7b5 with either a Gm9 or a Bbmaj7 and the harmonic flow would not change all that much. It also uses a combination of cycle of 5ths and descending chromatic chords to go from B to F.

I would argue that it's the beginning of a larger pattern of chromatically descending seventh chords. Notice that this Bø7 moves to a B♭m7, and this B♭m7 then moves through m7 chords built on A, A♭, and finally G, this last chord being the ii7 of the tonic F.

We call this—when a chord shape is moved up or down in tonal space—planing. And although the planing isn't exact beginning with this Bø7 (if it were exact, it would have an F♯ to make it a m7 chord like the successive harmonies), I think it's significant that the "wrong" pitch, F, is the tonic of the entire excerpt.

Ultimately, I'm not sure it's helpful to give a Roman numeral to this chord, Instead, I think it's best to view this Bø7 as beginning a prolonged sequential move to the ii7 that sets up the cadence on the Fmaj9.

It starts off a 'cycle of 5ths' sequence leading to the tonic with half the chords being ♭5 substitutions. Without substitutions the roots would be B, E, A, D, G, C, F. A very common harmonic cliche, with or without the substitutions.

I see the Bm7-5 chord as a variation of Dm or Dm6. If you want Roman numerals, it would be something like vi6/IV#. Try playing this expanded three-step sequence in place of the Bm7-5: Dm - Dm/C - Dm/B. But the song skips straight into Dm/B which is really the same thing as Bm7-5. And then it goes to Bbm.

Edit. If we should look at all possible uses of the chord, not only this song, then how to see a Bm7-5 depends on where you're coming from, or maybe where you're trying to move the harmony with it. A chord is a sum of its parts, and all interpretations are possible at the same time. If there's a B note, it allows for a half-step motion to Bb or C, or a fifths motion to E.

If we're in the key of F (expecting to eventually get home to F), and the previous chord is Gm9, then Bm7-5 is better seen as G9/B - a bass movement of a third, and a temporary modal mixing of D Dorian into the picture.

Not the answer you're looking for? Browse other questions tagged chords harmony chord-theory jazz analysis or ask your own question.

1
How would these chords from “Christmas Time Is Here” be analyzed?