how can I get guitar feedback that will only be heard thru earphones. I've been playing 30 years off and on, and I know most equipment, but I want to quietly record but still get that Cobain-esque style distortion with a Fender Stage 160 amp, and/or recording with/of the amp simulation and recording functions of a Boss BR800 eight track recorder.

There are pedals such as the Fender Runaway and the Digitech FreqOut that mimic this effect with electronics. I've not tried them, so I can't tell you how well they work.

There is no way to get "real" feedback using headphones only, however there are a couple of fake solutions:

But if you want it to sound real, you need the volume from an amp to create the feedback. No shortcut to doing it right.

How quietly is 'quietly'?
You can't do it on headphones, so it can't be done silently, but it can be done with a small studio monitor placed in very close to the guitar, pointing right at the strings & pickups.

You will need plenty of compression, the quieter or further away the speaker the heavier the compression needed. It will compromise your sound slightly, but you can just about get away with a much lower volume that would be required to do this 'for real'.

I needed feedback in a low-volume live setting and got fairly solid results with the DigiTech Freqout $179.99 at the time. It works at any performance volume, acting on the natural guitar signal. Since it's not true feedback it can't sustain forever--but it sounds pretty legit.

A long, sustained note begins one of the tunes on our album, feeding back until the intro solo guitar starts. We captured this on the record exactly as one would expect--in a large room, me ten feet from an amp cranked to nine billion decibels. Live shows found me doing it the same way, with fairly consistent results.

We booked a show for a Medal of Honor convention, a pretty sweet gig with 45 or 50 recipients, families and dignitaries in attendance. We knew going in this wouldn't be the place for a high SPL, sonically assaulting a bunch of octogenarian war vets, so I sought quiet feedback solutions. IIRC I only found two, and the other didn't review well.

I took a gamble, ordering the Freqout without much time to spare. Felt pretty dumb buying a $180 pedal for one song, but I lucked out.

I never adjust the settings (forgive the sideways photo). The gain and onset are just past noon. Momentary so the pedal only engages when I'm on the button. The 2nd harmonic sounds the best to me. I can't recall what "dry" does. I read the instructions when I got it, realizing in short order I'd likely never touch the knobs again. 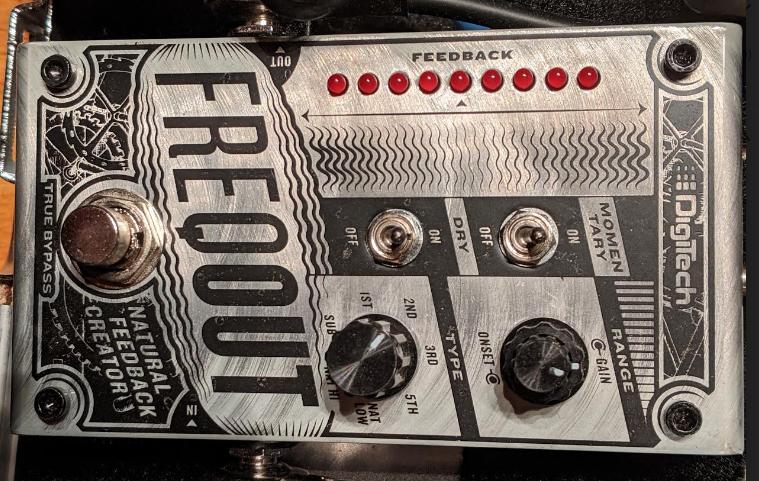 It's not perfect, but it sounds pretty convincing in short bursts--maybe ten seconds--and it then dies suddenly and rather anticlimactically. I've learned to time this and remove my foot before the "feedback" ends, and it fits the need--the LEDs indicate how much more "Feedback Mojo" remains, and I sometimes still watch them to avoid my feedback rug being yanked out from under me.

I've since worked the effect into more songs ...sparingly. Since it's on my board, I can use it while singing--needn't leave the mike to hug the amp. I'm pleased with my purchase, even if I only use it three or four times in a 90-minute show.

I think I saw one at Guitar Center--see if they'll let you test drive one.

Not the answer you're looking for? Browse other questions tagged guitar recording audio-feedback or ask your own question.