Why are there fingerings in Liszt's Beethoven's 9th transcription, a piece for a very skilled player who presumably doesn't need the finger markings?

I was watching along with an entertaining video of Liszt's solo piano transcription of Beethoven's 9th symphony. This thing is over an hour long with numerous technical feats and is surely something only an incredibly skilled pianist would even dare to try out. 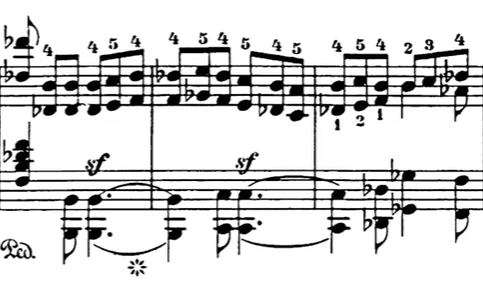 I wonder which of these theories is right, if any, and/or if there's other benefit to adding finger markings to virtuosic piano pieces.

In the interest of keeping this post focused, I'll just address the specific question of...

Why did Liszt put fingerings in his transcription of Beethoven's Ninth?

First, it's important to establish whether the fingerings are given by Liszt, which they are. Here is the passage given in OP "sample 1" from the Neue Liszt-Ausgabe edition (1993) (mvmt 4, mm. 462ff).

The Neue Liszt-Ausgabe is a scholarly edition intended especially for musicologists studying Liszt's compositional process and style. The edition is very strict in adhering to Liszt's original markings. In particular, this quotation from the "General Preface" to the series:

And in the Preface to Supplement 11, which contains symphonies 5-7, Liszt himself is quoted from a letter to the transcriptions' publisher:

Should you set to engraving the manuscript of the two Symphonies I would ask you to recommend to the engraver that they are engraved with plenty of room because of the fingerings I must add and also because of the complexity of the passages. (italics original; boldface mine)

As to why Liszt would have included them, the Preface begins:

Basically two motives impelled Ferenc Liszt to transcribe for solo piano the symphonies of Ludwig van Beethoven (1770 - 1827): one was the profound respect he felt [for Beethoven].... The second motive derived from the first: he wanted to popularize these masterpieces everywhere. (p. XV; emphasis mine)

A footnote to the above passage includes:

In the 1820s and 1830s few people knew and understood Beethoven's works.

One way to find out is to search for different editions, particularly earlier ones.

The most difficult piano etudes are published in editions with fingers. Why wouldn't this transcription be published in a similar way?

In both cases I think the point is to give fingerings for those who are working to attain a new skill level.

@ToddWilcox makes an important point about fingerings being (I think usually) the work of the editor.

I would blame the publisher or editor. They can be overzealous when it comes to simplifying things or fill out a page.

I did some engraving for a publisher and he made me add sporadic fingerings, dynamic markings and phrasing marks. This was back in the day when Finale was just coming out and most all submissions were handwritten. I remember contacting the composer for one work who took all that for granted and really had no opinion one way or the other. I had him mail me A CASSETTE of him playing so I could capture his intent. It didn't help so I added my own. Blame me.