What kind of modulation is this?

I'm new to this forum and learning music theory by self, so excuse/correct me if I'm using wrong terms or my question is unclear.

I have a piece E minor that I'm learning right now and I was trying to structure and analyze it. My question is about bar [2], but I posted everything else for the context.

In the bar [1] we have Cmaj7 followed by something that looks like D chord (both from E minor), but then in bar [2] there are chords Eb->Bb->F, which are not in E minor. There are no such chords in neighboring keys, in fact only G minor has all of them and G minor is kind of far from E minor. On the other hand it feels like after D in [1] we are just make a half-step up for just one bar.

Is this some kind of (extreme) modulation or some other technique that I'm not aware of? It sound good, but I can't understand why something like this even works. I haven't seen such tricks before (I'm leaning piano for 1.5 years). 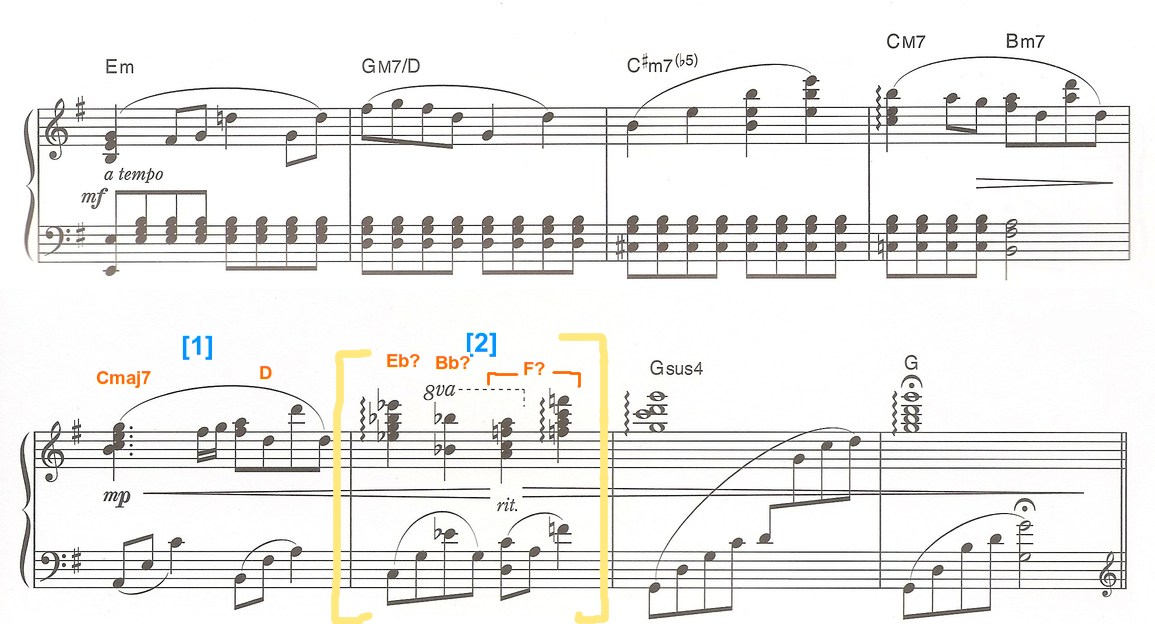 The bass notes are important. The chord you have labelled E♭ has a C root. Think of it as some sort of C chord. (It persists for the whole first half of that bar. Where you've marked B♭ there's no D or F notes.) The second half of the bar has a D root.

Now we've got a basic root harmony of C, D, G. That makes a lot more sense in an E minor context, doesn't it! A simple move to the relative major, G.

We know II, V, I is a thing. Cycle of 5ths and all that. Well, ♭VI, ♭VII, I is a thing as well, though a rather jazzier one that maybe isn't taught in Harmony 101. And they do the SAME thing - lead up to a tonic! And, hey, you can combine them!

I don't think there's much point in analysing deeper than that. ♭VII can be used as a dominant, though it's rather hard to analyse WHY in 'theory' terms. (A lot of 'Why' in music theory can be difficult to pin down in functional 'cycle of 5ths' terms. Just believe! Or cop out by describing it as 'planing'. It works because it's the same shape and adjacent. Well OK, but that doesn't actually EXPLAIN anything.) And ♭VI can act like a dominant-of-the-dominant. And when a chord is acting like a dominant, you can generally root it with the dominant note. Likewise a dominant-of-the-dominant.

(Oh yes - and you don't HAVE to be diatonic. That passage doesn't shift away from E minor/G major for a moment. Chromatic chords exist, and don't have to change the tonality.)

Not really much of a modulation, except getting to the relative major of G.

It happens in many pieces. Your E♭ harmony I'd put at Cm7, the 'B♭' is included, then there's Dm7, followed by an F chord. That's the 'odd' one. It can be said to be borrowed from the parallel key (Gm), and is often used instead of V - it's called ♭VII.

This is just a iv v I in G, if you want. It is much like a iv v i in G minor, so we say it is borrowed from the parallel minor. This works well(assuming other conditions are met) because it is just a change of quality. The modulation that takes place is sort of sub-conscious or so transient as not to be too unsettling. Of course it may or may not work depending on the context but if other parts of the music support it then it adds new "spices" to the generally bland diatonic progressions without too much harmonic trouble. [The ascending diatonic bass line is very strong in making sure to tell our brains that it is just a diatonic progression in G with alterations in color.]

So it seems like you have four problems: 1. Not recognizing 7th chords in the complete context, 2. Not understanding modal interchange, 3. Not realizing that one can pretty much use any combination of chords one wants, it depends more about "feel"/"mood", voice leading, motivic connection, etc. 4. Not taking in to account the importance of the bass.

So the progression is better thought of as Am9 Bm7 Cm7 Dm7 Gsus4. What is this? Just a ii iii iv v!! They are just walking but the scale playing the minor 7ths/9ths on each one! Notice the bass line on beats 1 and 3, ignore everything else, it's just A B C D. See how simple it is? All that other stuff is filler! He's just playing a scale in the bass, filling out some notes in the chord on the LH using arpeggios and playing some chordal stuff in the RH using "extensions" or "biharmony" if you will. That is, he's thinking of Am minor in the LH but playing Cmaj7 in the RH because he knows that this just gives an Am9 chord. It's sort of "bi" in the since of thinking of Am + Cmaj(7) but this is really just Am7(9). it's a way to get extended colors without thinking too complex.

You could change this, for example, to using a Cmaj in the bass, in fact, you could change the entire progression to what you think by shifting everything up a 3rd to get the bass to go C D E F# and then the progression would be Cmaj7, D7, E(b9), F#maj7. But in this case the two modal chords at the end would sound funky because they are not related to G(sorta like what you said). It wouldn't work out too well, but when you consider the base line properly things make sense(sorta how with a pedal tone we can do all kinds of weird stuff).

E.g., With Eb in the bass the Eb chord is out of context(it would be expected to be some sort of Ger chord or a V/V or whatever, but all sort of out of place). But with a C in the base it's just a iv chord, which is just a IV chord that has been modaly changed... not big deal.

The difference is that the bass provides context. A C in the bass clearly says "I'm in the key of G!"(in this example), but an "Eb" in the bass(which we don't have) would say "I'm doing something weird!". Nothing weird here.

Don't let yourself get confused. Most music "follows the rules" pretty closely and it won't do very strange stuff(because if it's following the rules then takes a complete 13th dimensional turn it will sound very bad). If you can hear it and it sounds normal and good then chances are it's not really "breaking any rules". Remember, a key is all 12 notes, not just 7! It's about how they are used. C in the bass here is pretty basic, Eb in the bass is not! And if it were then changes are it would resolve to D so it would be more of a chromatic move. If it when to Bb it would be odd because Bb changes the mode to G minor... it can be done, but it would be an "advanced" thing that simple music would generally not due, it would require a more "experienced" composer to make it work(it's not hard, but there are just more traps).

Always try to reason from the bass up. The bass is what makes the harmony. The bass notes are usually the roots or at least a basic chord tone. Start reading some music and just read the bass lines, try to get a feel for it and then things will make a bit more sense. The bass tones are the more important in establishing harmony because everything will be heard relative to them. You can't have a Cmaj7 chord in the upper structure and a Db bass tone(unless it is passing/nonharmonic/irrelevant). Db + Cmaj7 will be heard as Db + C + E + G + B = Dbminmaj7#11#13 a very twisted sound(which is better just called a Cmaj7/Db, but this does suggest the Db is passing rather than the Cmaj7, but names do not always tell us exactly what is going on and sometimes can be counter to what we hear). Of course you probably could perceive the Cmaj7 on top because it doesn't mesh with a single bass note of Db but it just generally would not work UNLESS it was made to work by making one or the other or some sub-structure be "passing". E.g., If the Cmaj7 came from Dbmaj7 and went to Dbmaj7 then clearly the Cmaj7 is a lower chromatic motion which jazz does a lot, no big deal because it's so temporary and clearly the tonality is Dbmaj7. Essentially though you can't fit a large square peg in a small round hole or vice versa. Again, alternatively the Db could be passing/moving so that the Cmaj7 structure is clearly the main thing. Whatever is going on, we can't have tension without release or it will sound terrible/odd. Once you understand tension and release then everything makes sense and the better you understand it the better of a musician you become.

Not the answer you're looking for? Browse other questions tagged theory piano chords modulation or ask your own question.

3
What are the primary (or most common) chords of the minor scale?
3
What is the use of the minor V chord in this song?
2
Asymmetric ease of improvisation during modulation
1
Key modulation in a fugue, how to not lose sight of the tonic?
7
False modulation for doxology in a modal key
2
How do the alternating C and Db function in this modulation?
3
Why do a 1, 3, and sharp 4 work well in this piece?
2
Which modulation is correct? (amongst other things!)
3
Does this modulation make sense?
1
Understanding function of some non-diatonic chords in Jack Johnson's "Belle"