On a new upright piano that is freshly tuned, I hear a high pitched chime-like noise specially when I press and release two mid-range notes simultaneously, like B3-flat and D4. The noise is like someone hitting on crystals inside a cave far away, and it rings for short a moment even after I release the keys.

I can imagine this should have something to do with harmonics of other strings being excited. But is there a way to get rid of it? Or is this something that one has to accept as "quality" and has to live with it?

I opened the case and tried to check the source, it seems that it is not the small strings that are without dampers. I also tried to damp the struck string by hands, but the chime persist.

I made recording which you can listed to the sound here. (You have to bring the volume up you clearly hear the ringing.) I created a time resolved frequency spectrum which is shown here: 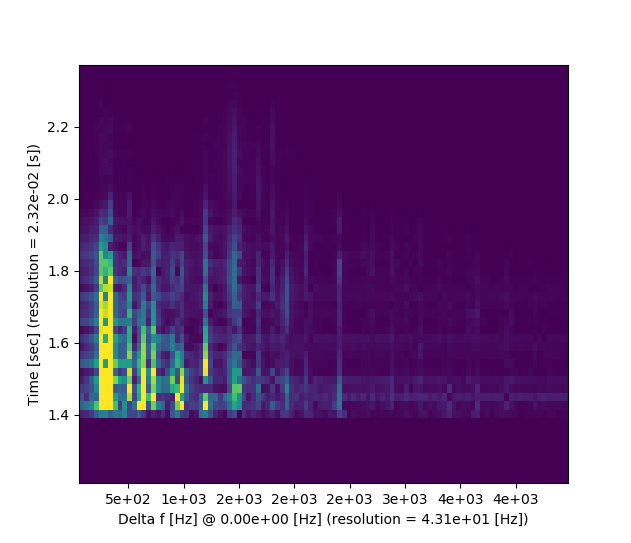 From the spectrum I can see the principal component of the two mentioned notes (D4 = 293.665 Hz and B-falt 3 = 233.082 Hz). But there are the other harmonics that are present all the time, perhaps due to other strings in spite of having dampers.

Can it be that the dampers of other strings are not pressing hard enough?

Or am I just being too sensitive on this?

To find out what's resonating you can try this:

Having said all that, since you mentioned it's a new piano, it's also possible that this resonance will go away by itself after some time, as the whole thing shakes down over time, just by being played.

After hearing the recording, where you play a Bb and the resonance is an F, an octave and a fifth above it, and noticing the resonance has quite a bit of sustain, I'd venture the following guess: the resonance is probably caused by the piano strings themselves, not being completely stopped by the felt dampers.

The resonating string might be the very same string you are playing (Bb), or the Bb above it, or one of the Fs. (Actually, you probably hear a lingering harmonic of the main frequency of the string, rather than the main pitch of the string)

You can easily test it by damping the strings with your finger, or some suitable material. To find out if it's one of the same Bb strings, play that Bb and keep the key down, and stop the sound by manually damping the vibrating string. If the sound stops without resonance, it was that. If the resonance continues, try manually damping other strings, the most likely culprits being octaves or fifths from the main note. But also try octaves and fourths below.

You can also try to gently press down further the dampers against the various strings. If by pressing further down the damper of a string prevents the resonance, that tells you that this particular damper is not stopping that string enough from vibrating sympathetically.

If this is found to be the problem, the solution would be to try and adjust the felt of the damper, so that is presses well enough against the strings, to stop their vibration completely.

Not the answer you're looking for? Browse other questions tagged piano acoustics or ask your own question.