Ella Fitzgerald's rendition of A Night in Tunisia

I'd like to satisfy this little curiosity I've been entertaining in my brain. I've recently been really into Ella's songs, especially her renditions of classic jazz standards. Her version of A Night in Tunisia is impeccable, but I can't help but wonder if she changed some time signatures from the original song. I suspect a clever change from 6/8 in the verse parts to 4/4 in the chorus part. Can anyone confirm this?

@Tim’s interpretation is right(+1)...and so is yours! Although BTW the last two bars of the verses briefly switch to 4/4 swing as well. It all depends on how you interpret it. Here are the piano and bass parts. The top line is yours and the bottom is Tim’s. Sorry for all the flats but I didn’t pick the key! 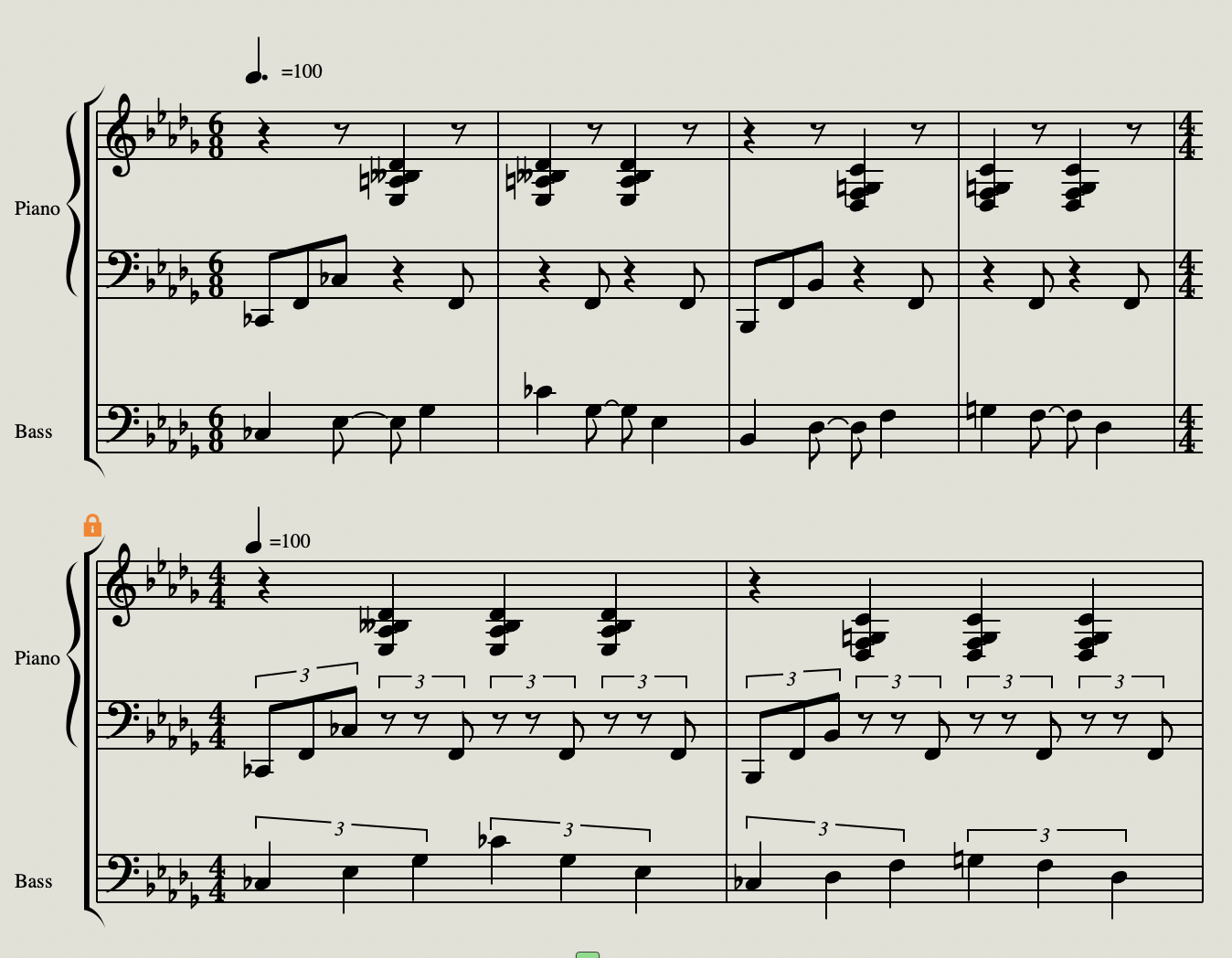 This is typical of Afro Cuban 6/8 where the bass plays quarter notes against the groups of 3 eighth notes in the piano and the rest of the rhythm section.

The advantage to writing it Tim’s way is there is no need to indicate a meter or tempo change of “dotted quarter = quarter” for the last 2 bars of swing in the A sections and the bridge. Afro Cuban grooves of this type are usually written in 6/8 though.

SIDE NOTE: as Tim mentioned in comments, this tune was originally written in 4/4. It was played with an alternating Latin-swing feel.

You are right that this (wonderful) version of this tune does something interesting rhythmically that is different to the Dizzy/Bird original, which is widely followed as the "standard" arrangement for performances of this tune. The original features a syncopated pattern – a pattern whose stresses opppose the stresses of the underlying pulse. This arrangement takes these rhythms and modifies them to suggest that the underlying pulse has been changed – you could say "redefined". The term for this is metric modulation.

In detail, the original has a left-hand piano pattern (which we could call an ostinato) with rhythm

adding an extra taste of syncopation with that first note, an eighth note after the downbeat, and (cruicially, for our analysis of the Ella arrangement) with the notes played alternating between two pitches.

The arrangement in Ella's recording takes this source material and does something very clever with it, really combining this left-hand ostinato with the horn riff into a repeated rhythmic pattern

where the first three notes match the first three notes of our bass ostinato, but from the fourth note onwards, we alternate between pitches. That is, the effect is to have moved the first horn "hit" of the riff in the original to coincide with the fourth note of the bass riff. So the fourth and fifth notes in the above correspond to the first and second notes of the horn riff. We might then expect to close out with a X–X–X–X– rhythm. Instead, the rhythmic relation of the two notes we have already played is repeated as we alternate between pitches: we have X–––X–X–––X– instead, giving us a twist on the familiar horn riff.

What is nice about this is that we end up with 12 eighth notes total, so we can treat this as adding up to a whole bar in compound meter (12/8). This is what's done as far as the tempo, the sung melody, the sequence of chord changes are concerned. However that has now undone the extremely characteristic syncopation of the original arrangement. Can we get the best of both worlds? Yes. The bass plays as though these were duple eighth notes, so rather than playing 4 dotted quarter notes to a bar the bass plays six quarter notes, that is, a 6/4 meter.

Not having listened to Ella's version, but the times I've played it, it goes into swing feel - still 4/4 - at certain points. That may well be what makes you think 6/8.

Just had a listen - the main part of the verse is 4/4 but the bassline is playing crotchet triplets not the way I've ever done it - until that swing at the end of each verse.

Unless we have the arranger's actually sheet music, we can't know exactly how it was written, but you a right that the time signature is a bit ambiguous.

What's happening here is called a polyrhythm - in this case a 2 against 3 polyrhythm. Essentially, the piece can be counted multiple ways depending on which instrument you focus on - in this case 4/4 or 6/8. This type of polyrhythm is very common in the Afro Cuban style of jazz, which is what I would call this feel during the first part of the arranger.

This is not a completely unique take on the piece either. Art Blakey & the Jazz Messengers recorded a version of it where the bass player plays essentially the same bass rhythm with different notes. The feel is also similar to Senor Blues by Horace Silver, which is always notated in 6/8.

Not the answer you're looking for? Browse other questions tagged rhythm jazz time-signatures or ask your own question.

1
Can someone tell me the meter of the verses, chorus, and bridge in “A Night in Tunisia” by Ella Fitzgerald