I'm having a little trouble analyzing this blues-y cadence. 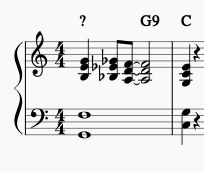 your first point: you're right, the third is implied and this is G9.

The main question: G6 or G13? G6 usually wouldn't appear together with the 7th. So this is G13, especially because the 7th (F) is lower than the E.

(Of course you can call it G6 or Em over G7 and the the other chord Dm over G, I use this spelling for easier reading and memorizing. But like you say: the whole bar has a dominant function. In theory sometimes we have to decide whether we want to analyze just the chords or the function. Chords analyzing makes it much easier.)

I would consider the entire measure as a dominant chord embellished by a chromatic passing chord. The presence of the E on the first beat is an accented upper neighbor, but the later A does seem worth calling out as a 9th, since it hangs around a while. Functionally, though, the A is also just a passing tone between the B on beat 1 and the G in the next measure.

The first chord looks a bit like an E-minor with an added ninth; it lacks the characteristic seventh for a true ninth (though it would not be wrong to analyze it as such.) The second chord (with the 3 flats) is an Eb minor (a passing motion between the E and the ensuing chord). The third chord is a D minor (which is the top three notes of a G ninth). The G in the bass acts like a pedal point (or an organ point depending on which book you look at.) A pedal point is a sustained note (usually the tonic or dominant) with a bunch of stuff above it which may be consonant or dissonant.

The most important pattern seems to be the (partially) chromatic descent in the melody: G-Gb-F-E. At least, classically speaking, this is rather common; a scale-like passage (chromatic or diatonic) may give rise to chords that are hard to analyze.

Personally (opinion here), I think of "functional" chords as having (at least) four functions: tonic, dominant, predominant (aka subdominant), and passing. Passing chords add harmonic and melodic color to a phrase: they need not have a nice analytical description. Compare with the "wedge" or "omnibus" progressions where a chord exchanges the 3 and 5 positions through chromatic motion. https://en.wikipedia.org/wiki/Omnibus_progression

With its notes being G, F, B, E and G, that first chord has a m7 and a M6 (and M3), making it G13.That's a dominant chord, which drops chromatically, but with a stable couple of bass notes, ending on G9, albeit losing the M3 on the way. Dropping (almost) chromatically again to the expected C chord.

For what purpose are you doing the analysis? Is this theory homework where you have to give chord symbols which represent all the played notes and nothing but the played notes as accurately as possible? Remember that chord symbols don't describe any voicing, which might be very important for getting a specific sound. Or are you making an approximation for accompaniment purposes or for making arrangements?

If it's for accompaniment or re-arranging, I would label the chords G13 and G11 or Dm/G. That's not theoretically accurate, but for example on the guitar (and it's a good to think about a guitar reduction for a blues), those chords might be played with pretty much exactly with the notes you have in the picture.

If it's for arrangement purposes, here's a cool sounding variation (in double time compared to the original version): 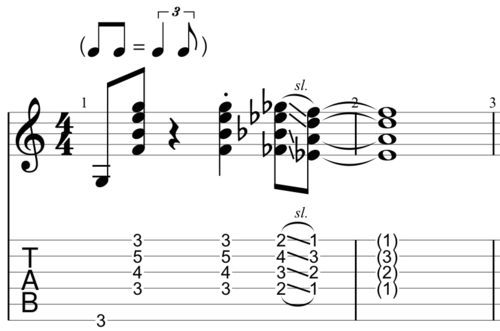 The function of the first chord is clearly a dominant V of C, because after this bluesy chord lick there's a C chord which provides a resolution. In blues, dominant-seventh chords are used as "normal" chords without resolving the tension, but your example goes to a C chord.

Not the answer you're looking for? Browse other questions tagged chords harmony chord-theory cadence or ask your own question.

2
Diatonic harmonic function of chord inversions
1
Cadence in Haydn's String Quartet in G, Op. 54, No 1, i, 1-13
3
Are there any pre-20th century examples of an augmented 6th chord with a leading tone?
10
Definition of Functional Harmony
5
How a chord is analyzed as a "chromatic mediant of the V"?
2
How would these chords from "Christmas Time Is Here" be analyzed?
2
Help naming/analyzing sus chord and possible secondary dominant
1
Rewriting slash chords with chromatic descending bass
3
How can this chord from Rhapsody on a Theme of Paganini be analyzed?
1
2 atypical cadences, are they half cadences?