Did Iannis Xenakis write any music with intentions beyond absolute music? For example, music paired with other forms of art?

For example, Terretektorh (diagram pictured below) illustrates that Xenakis indicates for the piece to be played within and amongst the audience. Would anyone be able to elaborate on this piece or suggest any others? Here is a performance of Terretektorh. 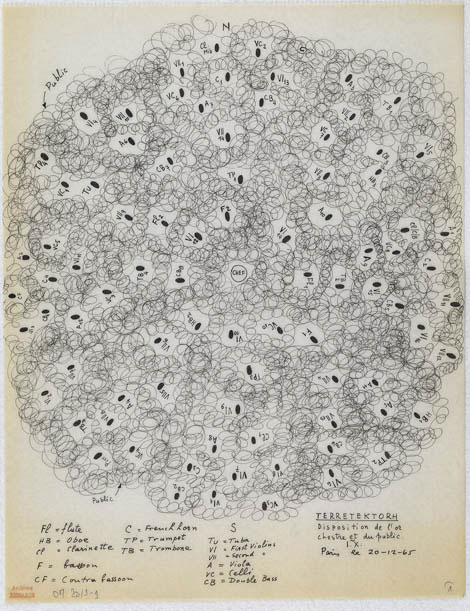 Since everyone can perceive music differently, my question is not only about how musicians interpret a composer's intentions, but also how composers expect the public to perceive their work.

It would be helpful is someone could provide any specific stylistic ideas Xenakis had about his (or some of his) music.

Another request he could have made that is not very specific to the musicians performing the piece is if Xenakis asks certain composition to be listened while looking at certain painting, or some sculpture, any other form of art going beyond the music. It might probably be interesting if examples are given from other composers but I was interested specifically if Xenakis did this sort of requests.

Did Xenakis compose music intended for settings where other art forms were an integral part? Certainly. Look up Polytope de Cluny and Persépolis for a start (8 track electroacoustic works with light show).

The question of his intentions is thorny and I do not wish to speculate about them. However, you can find in Formalized Music a description of Duel, a kind of game where two conductors compete against one another. Is that a concept beyond absolute music? Probably one can argue that it is.

Xenakis' famous description of a political demonstration with a crowd shouting slogans, ending with a brutal confrontation, which you can find in the first pages of Formalized Music, clearly relates to his use of stochastic principles of organization in his compositions. Does that make them program music? Not necessarily.

Not the answer you're looking for? Browse other questions tagged performing composers or ask your own question.

12
What are good tips for remaining composed during one's first public performance?
27
Where do musicians draw their melodies from?
10
Do classical and rock musicians train with different goals?
4
Which keyboard works - beside Bach's - are part of the study curriculum *and* regularly performed in public?
2
How should I play/phrase an anacrusis (aka pickup)?
2
How much math did Iannis Xenakis understand?
1
Starting my career as i'm not a native english speaker
6
Still making mistakes in pieces after years of practising them
5
How would one go about composing a Tintinnabuli piece?