How to read and play these beginner power chords

Few questions came up when I reached the chapter power chords of a famous well known beginner guitar book: 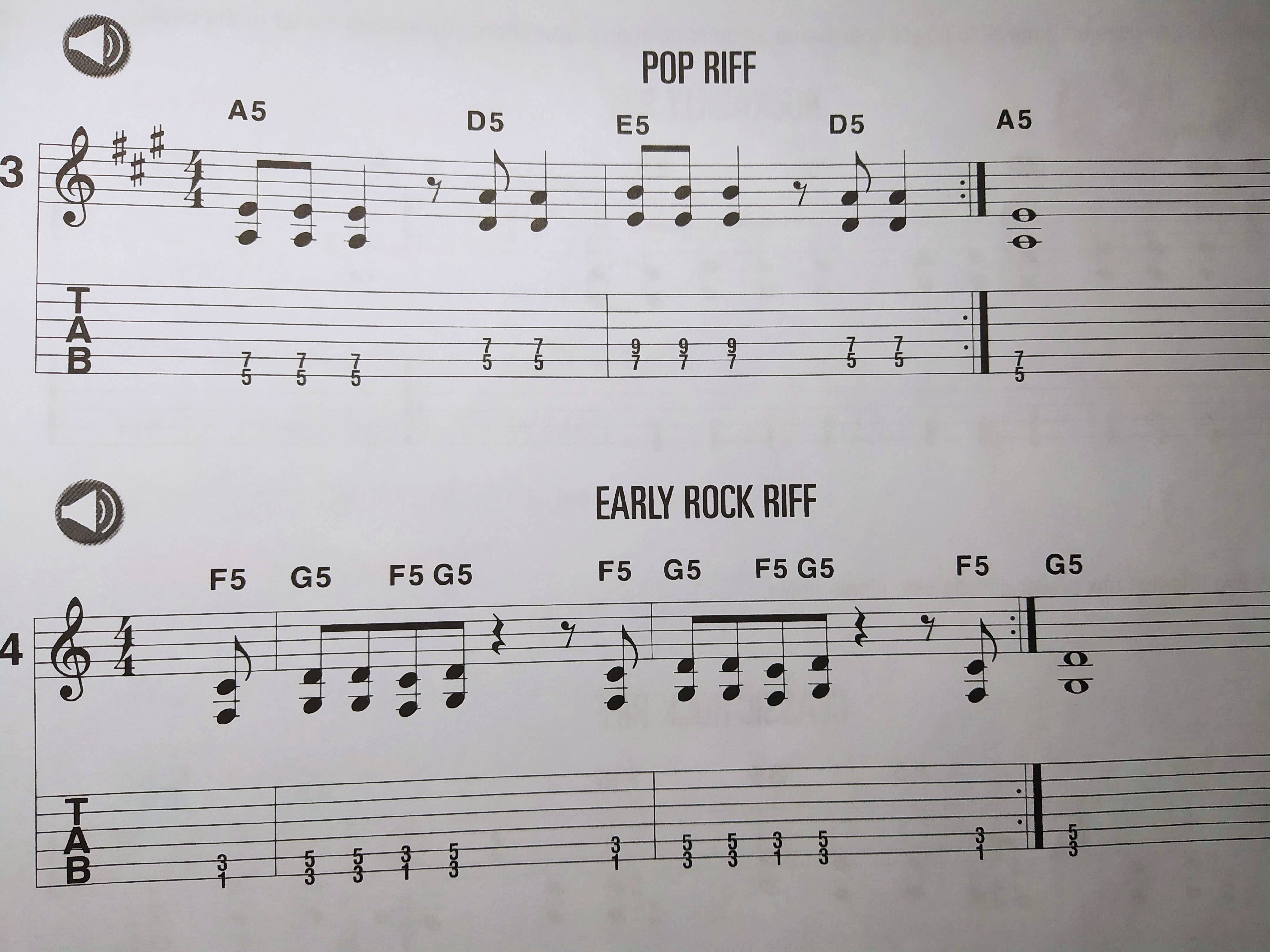 How do I pick when there are two 8th notes at the same beat such as a power chords or chords in a blues shuffle? Do I play down down or down up?

There isn't one right answer to this. Both works. Try out both and see what gives better results. I'd tend to say you should mostly practice with alternate picking, because it's much easier to switch to a brutal-hammering down-down-down (which some metal guitarists prefer always) than to learn a relaxed alternate pattern later on.

Suddenly there are notes on higher fret positions shown with tabs such above power chords.

Well, power chords are so easy to move around anywhere on the neck that there's little point staying confined to the low positions for long! The only difficult bit, as you seem to have found out yourself, is orientation.

Most rock guitarists do not read standard notation, only tabs (if at all). It's certainly ok if you use the tabs as orientation, but at least you should also memorize the chord symbols because that's what you'll need most when actually playing in a band situation or starting to get the grasps on music theory. I would also strongly recommend that you do learn the standard notation as well – again, most guitarists don't bother, but it's a useful skill to have in many ways. But don't worry too much about that right now.

For those examples, I would pick down and through, trying to make it sound as much as I could like they were struck at once.

Tabs are common. They're somewhat controversial, with some name players arguing that learning from tab isn't "real guitar playing", but generally, is a rare guitarist that can read music.

The Chromatic scale is a lot. It's literally everything until you get to microtonalism. There is value to knowing absolutely where every D# is on the neck, but find the joy in playing before doing that work.

I would start with the major and minor, both the full and pentatonic versions, solidly in A, first around the fifth fret, then in other positions and then up and down each string. After that, start with the other keys, realizing that the shapes are the same, so if you know A major, you mostly know G major, C major, etc. Common keys in pop/rock are C, A, G, E and D, but you can find songs in every key.

And everything starts over at the 12th fret, so it will be tighter, but everything else is the same up there.

Strumming downwards usually produces a more forceful sound. Alternate picking is only one way to play things on guitar, whether single note tunes, or riffs.

Both these riffs benefit from being played with down strokes. Let's face it, they're not so fast that that's impossible, and a look at videos of the originals will probably verify that.

You, as the player, have to make decisions such as this all the time when playing, so get used to trying out all options, so you can choose just before you play, and make the most appropriate sounds.

On your second point, far more guitarists use tab rather than 'proper' music. In fact, I doubt if more than 10% of guitarists read music. A lot won't bother with either, as they are capable of listening to something, then playing it. That way, they get to choose where each note is fingered, rather than being told where, from the tab - which is only one variation, usually, of where things can happen.

Working from a book is o.k., but when you get stuck - as here - it's not like having a good teacher, who you can ask. Same with stuff on the 'net. Try to rely more on your ears, listening to what you're doing. Use intuition, don't trust everything you read. And if you do decide to learn to read music, there's plenty of work about in the future - plus you know that what you're playing is correct! Good luck.

Not the answer you're looking for? Browse other questions tagged guitar chords beginner fretboard or ask your own question.

10
Are there any books or videos out there that teach you SLOWLY and do not focus on learning TABS?
0
Playing higher A and B
2
How to play non-beginner barre chords
7
How to read guitar tabs more effectively and efficiently?
8
What is this chord called that looks similar to power chords?
3
How to distinguish power chords from single notes?
3
How do you play this Chinese tab?
5
Is fingers pointing towards each other a problem when fretting a guitar
6
Are these indentations on the frets of my Acoustic for intonation? Can I apply this to the frets of my Electric?