New guitar player here trying to learn music theory and guitar from the ground up. I have somewhat of a two part question. Trying to wrap my head around the first part.

So far I have learned the basic chords, have a pretty firm grasp of the CAGED system (Moveable chords) and have learned the major scale and its associated formula WWHWWWH. Starting to dig into tonic/roots and 3rd 5th for the major scales. Upon searching for the best way to practice scales, I have seen two main starting points: 1) learn the 5 (or 7) scale shapes or 2) start with a few select widely used scales (E min pentatonic, C Maj open, etc.).

As a beginner my thought is to learn all the major scale shapes so that I can move them up and down the neck to play scales in different keys. Then move on to modifying them for minor scales, then major and minor pentatonic. Is this an effective method of learning scales as a complete beginner? Or should I focus more on playing along to songs with the more popular scales?

My ultimate goal is to play blues. My worry is that I will spend months learning these scale shapes and then kind of forget them as I move onto just using pentatonic scales.

Since pentatonics are simplified full scales - and can be used, as they are, in Blues - do that first. Major and minor pents are related, so it's not too onerous. That's where guitars come into their own, as the shapes used lend themselves to being played on guitar.

Then, as a bonus, just slip in the ♭5 to the pent. minor, and you're ready to go with minor Blues. It won't then take much to find the extra note to change major pent into major Blues.

After, use those notes in those shapes and add the two missing notes to produce full major and minor scales, although for Blues, what you'll already have will work pretty well. Don't neglect bending, though, as certain notes get bent for Blues, and knowing which and how is all part and parcel of being a Blues player.

I think from your question wording it's clear you understand that major/minor scales and blues scales play are significantly different. But I think there are two things to think about regarding "woodsheding" the fretboard:

For the finger groupings the basic idea is the same thing can be played with three different finger groupings (positions.) Here is an example for a major tetrachord (the first four tones of a major scale.) 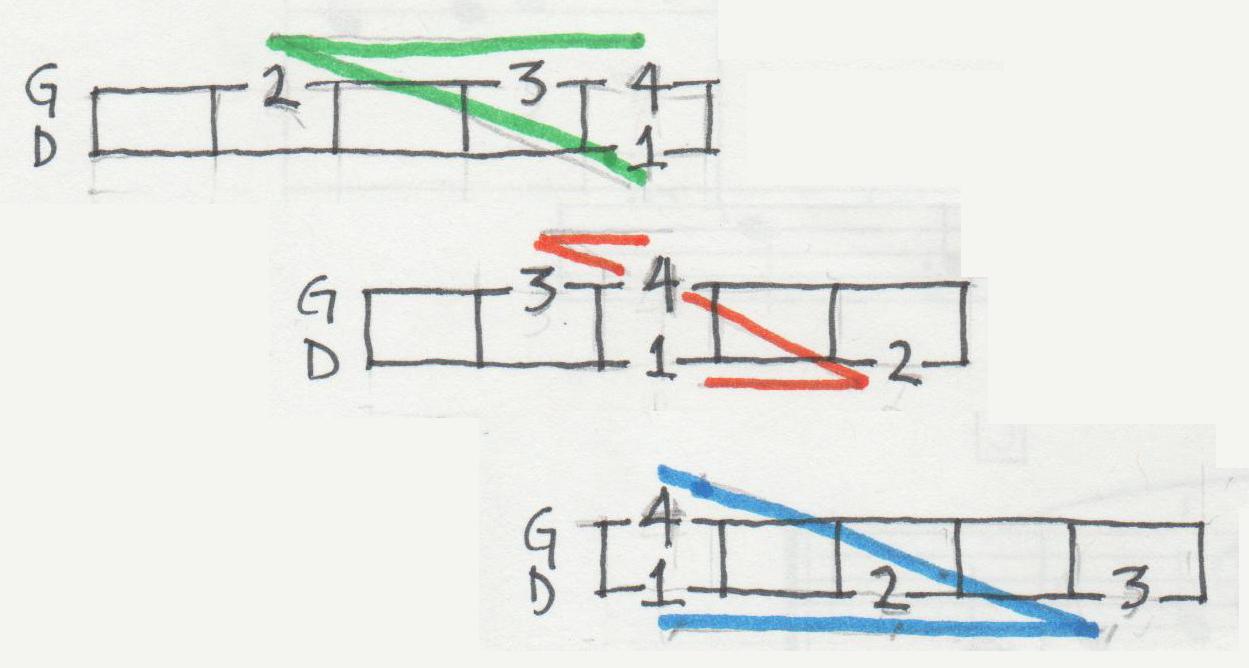 The G D are string letters and the numbers of the scale degree numbers. Green is what I call "lower" position and the 1 scale degree would be played with finger 4.

Orange is middle position, degree 1 would be played with finger 2.

Blue is upper position, degree 1 would be played with finger 1.

The point is to associate alternate fret choices with the direction your are moving on the fretboard and then practice the right fingers that make things reachable. It makes sense for "three notes per string" which is a common approach for playing diatonic scales & modes. It doesn't apply to two notes per string pentatonic boxes.

Transposing scale across the strings - transposing by perfect fourths - will help learn patterns and especially internalize the funny shift in the "shape" patterns that happens when moving over the G and B strings. Here is the major scale transposing by fourths...

The dot enclosed in a box is the tonic for each scale and the numbers are the other scale degrees. The three colors just highlight three basic box shapes that make up the diatonic scales & modes, and each color represents a lower, middle, and upper position as I described above.

Lower, middle, upper positions aren't all on that charts, here are all three line up so the tonic stays on the same fret starting with string 6... 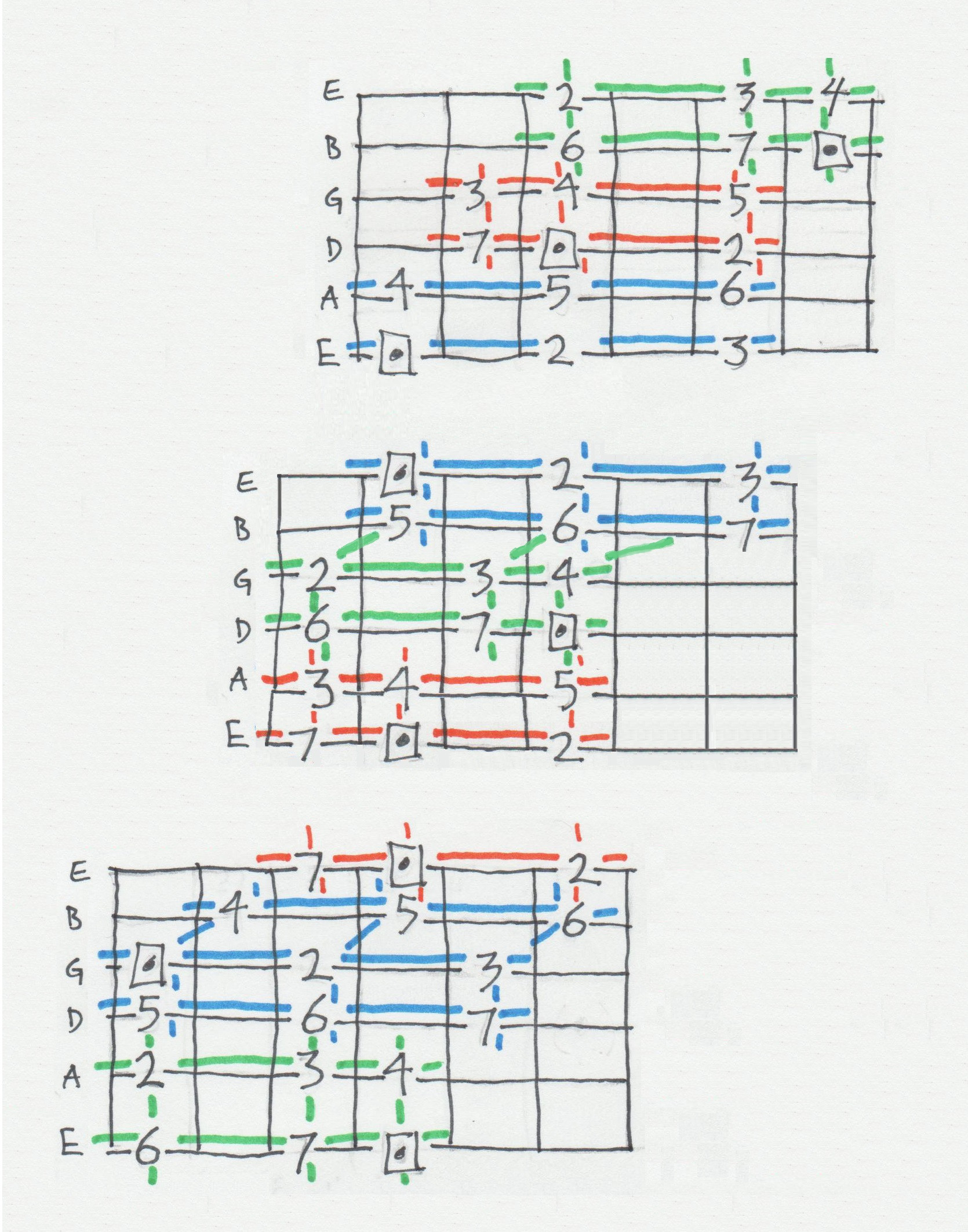 Notice that with C(B) box the tonic shifts up one fret on the B string. At that point when you transpose up another fourth you will go back to the E(F) box but it will now be shifted up one fret. When you keep transposing in fourths like this you will repeat the five patterns across the strings and shift up one fret after each series of five.

It's important to start and end each box on the tonic to get the proper sound of the major mode and feel the targeting of the tonic in the various lower, middle, upper positions.

While that sequence will take you through the major scale in all keys, it also provides a sort of "hidden" mode exercise. As major scales the tonics ascend E, A, D, G, C... But, we can imagine the starting tonic for E - string 6, first fret - staying fixed and then the five patterns move through the various modes on E. The A major box becomes E mixolydian, D major becomes E dorian, G becomes E aeolian, C(B) becomes E phrygian.

If that stuff about modes is confusing, don't worry about it for now. When you get familiar with playing in all 12 major keys the understanding of modes will come easier.

I have seen a number of guides that show "three notes per string" scale where the patterns shift up the frets essentially going through all the modes of one scale. There is a subtle difference between that and transposing by fourths across the strings. When you go up the frets through the modes you get a sense there are many, many different boxes for all the modes and which string gets the tonic. But in reality there is only one diatonic pattern on the fretboard!

It's hard to see the pattern, because of the one fret shift between the G and B strings to go up a perfect fourth. You can visualize it by looking at the orange box in the E and A patterns. In the E pattern it looks like a square next to a rectangle. But in the A pattern it sort of leans over and becomes trapezoidal. That's the "shift!" The box is the same, just tilted. If you practice across the strings, transposing by fourths (you can do it with any musical passage, pentatonic boxes, arpeggios, and so on) you will start to see there is only one diatonic pattern instead of many confusing patterns.

There are way more than 5 or 7 scale patterns or shapes. And you should devote some effort to learning the open string keys in open position. They will feel way different.

There are version of the scales that match the 5 chord forms in the CAGED system and it definitely makes sense to learn how these are connected. But there are 7 modes that are related to the diatonic scale and they all serve a purpose. After that there are the minor scales, not just natural minor but harmonic and melodic and there are 7 new scales associated with the melodic minor.

I think that for a beginner rather than try and discover the "best way to learn" just pick one and commit it to memory, muscle memory. There is no reason not to start with the 5 paterns that line up with the CAGED movable chords.

My ultimate goal is to play blues.

That is simultaneously a larger and smaller target than I think you're currently aiming at.

Not the answer you're looking for? Browse other questions tagged guitar electric-guitar beginner blues or ask your own question.

11
Logical way to learn movable scales on guitar?
6
Approach to learning arpeggios for chord-tone soloing (shapes or notes)
15
What is the best way to learn scales in order to improve improvisation/writing of lead guitar parts?
2
Should I learn the CAGED patterns for harmonic and melodic minor scales?
1
Complete beginner question: Jazz guitar
4
Learning the scales using triads
4
My jazz guitar doesnt sound like jazz
9
Is the CAGED system the main way for learning the guitar's fretboard?
5
What to do after learned scales positions?
1
Learning path advices