What is the correct hand position for this chord?

I'm a beginner (2 months playing, no teachers so far), and I'm trying to learn how to play Sonic the Hedgehog - Green Hill Zone's piano sheet. However, I cannot figure out how to position my hand for the chord presented in Figure 1 below. 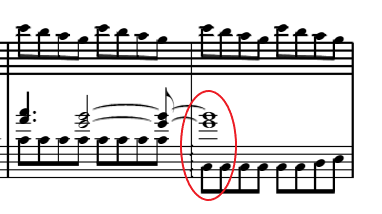 The C is two octaves down (I think), and I can't figure out how to play it. Thanks for the help.

Listening to a recording of the piece (around 0:12), the arranger of the score above created an accurate transcription, but not a playable one at that point. However, in the recording the bass part doesn't become prominent until the second half of the measure shown. My recommendation is to leave the bass C as middle C for the first half of the measure and then play as written in the second half, dropping the chord. This will have the effect of preserving the melody -- the chord -- as long as possible while still maintaining the bass run up to the next measure of the arrangement.

NOTE: In the video provided in @piiperiReinstateMonica's answer, the arranger drops the chord entirely when entering the second measure of the OP.

The only way this is playable with two hands is to 'catch' the G and B from the bar before with the sostenuto pedal That's the middle one of three. Assuming that isn't a practice pedal, like it is on lots of pianos.

The sostenuto pedal is designed so that it works like a sustain (damper) pedal, but only holds the notes that were actually played as it is pressed. If you use the sustain pedal instead, you'll have all sorts ringing out where they shouldn't be.

If you happen to be asking where the B and G notes are, they're above middle C on the piano. But they are in the music earlier, so I guess it's not that.

I don't know if this is a proper answer, but ... here is a video of the arranger playing the song:

It looks like he's not playing the G and B notes at all in that bar! And to me it doesn't sound like he's pressing the pedal either. :) The answer to the mystery is probably that the arranger should have been more careful with writing the notes - but then again he did provide a video example.

I found that from the site that was mentioned on the Scribd PDF: http://www.gamemusicthemes.com/sheetmusic/segagenesis/sonicthehedgehog/greenhillzone/index.html

This is just another bad online "piano arrangement."

If it were a real piano arrangement, the "arranger" would have put in pedal markings or some other indicator at the point you highlighted.

There is also no tempo indication. Old Baroque scores often had no tempo markings, but there were tempo conventions for certain meter and typical rhythm patterns. In a modern score leaving off the tempo isn't normal. This isn't just a quibble. When looking at the left hand repeated note figure with doubled thirds played simultaneously in the left hand I wonder just how fast it's expected to be played!

Signs like these tell me there was no thought put into how a performer is actually supposed to play the music. That's a stranger indifference to the performer when the whole point of arranging is to make music available to performers on different instruments. Quite a bit of change can go into an arrangement for the sake of performance on a specific instrument.

Not the answer you're looking for? Browse other questions tagged piano chords sheet-music or ask your own question.

1
What chord is this?
6
Learning Bossa Nova Guitar
12
What do the letters above the piano staff represent?
6
What is this third staff in G clef and how am I supposed to read it?
1
Problems with left hand chords on the keyboard
2
How do you play left and right hand Piano according to this player?
1
F-chord on Ukulele (hand position)
8
B flat major triad - music theory