I'm trying to determine the correct algorithm for using a classical circle of fifths and create chord progressions please. I understand that we can navigate clockwise (5th) or counter clockwise (4th), starting from any point.

What are the do and don't for the cirlcle? 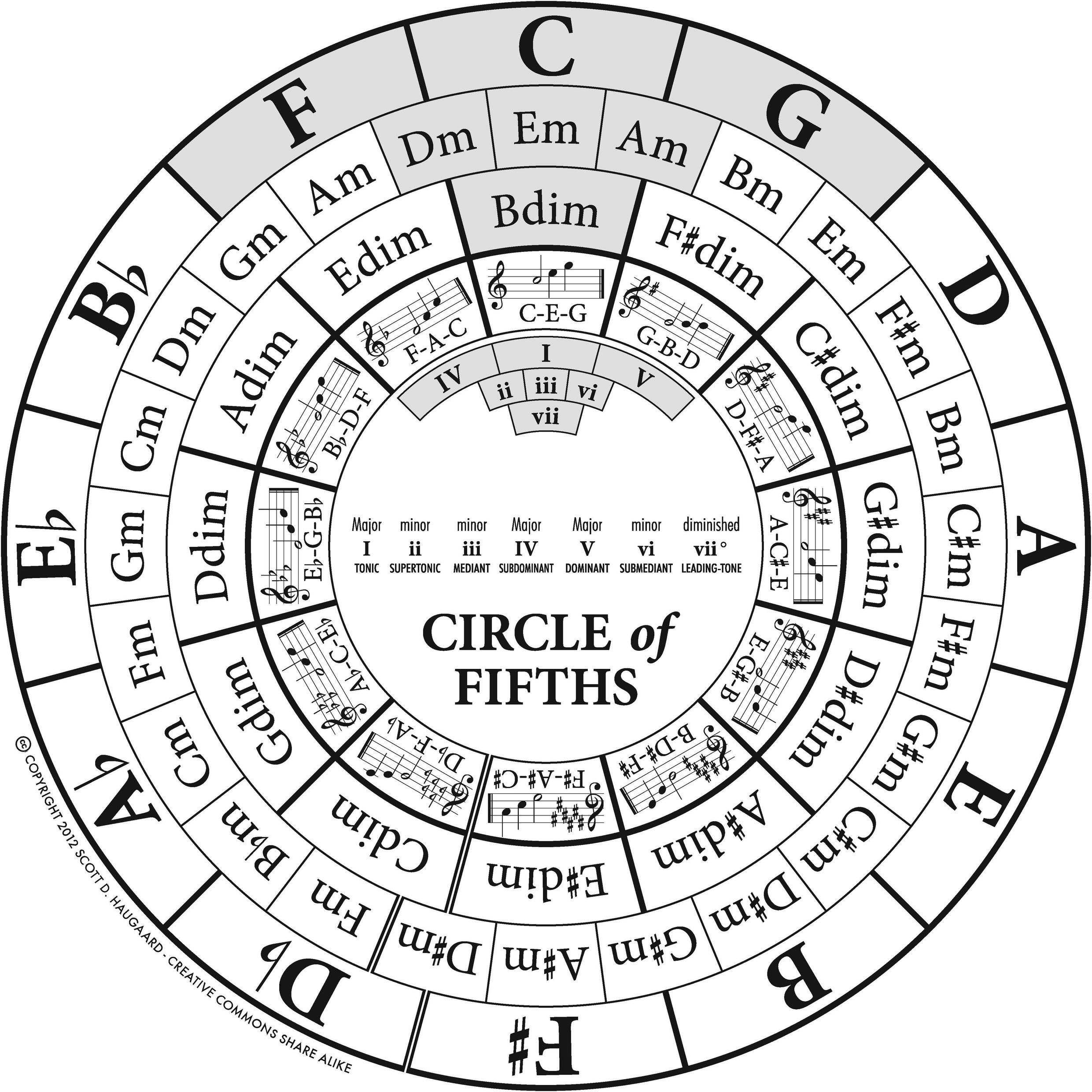 Any help on this would be apreciated.

Have a good day

I cannot tell if you are a music student trying to understand Western music theory or a programmer trying to make a music app, given no actual knowledge about music. Either way your operating assumption are completely false.

The circle of 5ths (or 4ths) illustrates how keys are connected and this connection is related to the tetrachord, the structure of the major scale, and the natural harmonics of vibrating systems. By changing just one note of the major scale in any key you jump to a new key that is a 5th or 4th away. the classic example is the key of C, which has no accidentals. If you flatten the 7th degree, B, you will be in the key of F. If you raise the 4th, F, you will be key of G. As it turns out the lowest harmonics of the notes C, F, and G fill in the notes of the C major scale. These are referred to as "compatible" keys. However that does not relate in any way to building a chord progression in a single key.

Your assumption or question about how many jumps one cane take, or that one can just move in 5ths is not at all how chord progressions work in music. The fact is that if you keep moving in 4ths or 5ths you will leave your home key signature and not necessarily in a graceful way. The notes of the major scale are harmonized by the Major chords built on the 1st, 4th, and the 5th degrees (no surprise since these notes generated the harmonics that gave rise to the major scale in what is known as Just tuning). So, rather than just build a progression, one takes a melody and harmonizes it by choosing the chord from among the set {I, IV, V} that contains that note. This is the starting point for homophonic multi voice harmony.

There are other standard practices in music theory like ending a musical idea with a cadence like V7 --> I, etc. But these are just guidelines. There is no algorithm for making a progression. At the end of the day you just use the chords that sound nice. It is very rare that anyone just moves around the circle of 5th. In general that will never work and you will need 12 jumps to get back to the starting point (same as walking up the chromatic scale).

Rather than this, familiarize yourself with some of the most common progressions and how they are used.

Probably the most complete is the "circle" progression. It goes,

Note that this is NOT the circle of 4ths because of the 7th degree. Other small pieces of this are used,

And with that last example I would say that people use the ii-->V7 frequently to enhance movement form one chord to another, for example if you want to move from I to IV you can insert a I7 before the IV and that will sound cool (it will create a cadence to the IV and a true key modulation), you can also add the ii of the IV, I --> V --> v --> I7 --> IV.

The point is we don't just walk endlessly around the circle. We have way points in music that we can choose to move into using part of the circle (an arc if you will). This has been hammered to death by Max Reger in his work "Modulation". I'd suggest learning more about harmony and the reasons we choose certain chords before trying to distill the process into a "algorithm".

I understand that we can navigate clockwise (5th) or counter clockwise (4th), starting from any point.

That's not really correct. From C4 to G4 (i.e. up by 7 halftones) means going up by a perfect 5th. But if you go from C4 to G3 (i.e. down by 5 halftones), then you go down by a perfect 4th although you navigate clockwise through the circle.

How many steps can we 'jump' on the circle?

As many as you like. You are the composer, you make the rules. Does it sound good? If it does: Jump!

Must we always use the chord next to it?

Same answer as before: You are the boss, you make the rules.

The 2nd ring contains minor chords that are related to the major chords standing nearby:

The 3rd ring contains diminished chords that are related to the chords from ring 1:

Note, tha in all chords before the highest tone of each chors was 7 halftones above the lowest. But F is only 6 halftones above B. So B-F is not a perfect fifth but a diminished fifths, and this why the chord B-D-F is called "diminished".

There are some different approaches to understand and apply the circle of fifths.

There are many other progressions that are represented in the circle like e.g. C-am-dm-G7. We can explain the as ii-V7 chain (going from C 3 chords (hours) ahead (clockwise) and step backward (counterclockwise) to C. But you can also say we go to the inner circle (minor chords) to the relative chord of C (am) and counterclockwise to the subdom relative (dm) and finally to V7-I (G7-C).

The secondary dominant chain is often paired with a chain of sequenced motives (fifth fall sequenc).

But there is also an ascending sequence in common use, like C-G-Dm-Am.

Always mind that these progressions are related to a melody. Theoretically the fifth fall sequence has no end and you can play it round and round (like you can play a chromatic scale down. But in practice I've never seen a progression longer than 6 chords of secondary dominants following the circle.

Not the answer you're looking for? Browse other questions tagged chords chord-progressions or ask your own question.

2
Playing the “fail” sound effect on a guitar?
12
How common is the complete circle of fifths progression?
7
How to make a song with chords and scales?
7
How would you go about writing a a chord progression properly using the circle of fifths in the phrygian mode?
10
How to determine passing chords
1
Melodies vs. Harmonies
0
Problem with determine key of a song using chords
4
Why does G-Major work well within a C-Minor progression?
3
Why No Augmented Minor Chord?
8
How to apply Paul Hindemith's harmonic theory