What tone to play for an upper neighbor in jazz?

My question is about playing upper neighbors to embellish basic chord tone motion. 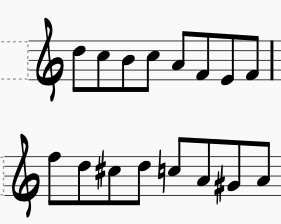 ...seem to pose no problems. Just use half steps below and the neighbor sounds like a leading tone and it never outlines a tritone

...where a tritone is outlined. In minor this doesn't seem a concern, because that tritone is just outlining all chord tones on both iim7♭5 and imin6.

Only A B A F on the ii chord in major seem like a potential problem.

For a jazz player, would the "basic" approach put a flat on it? Like, A Bb A F over ii in C major.

I understand that both diatonic and chromatic lower/upper neighbors are all part of the jazz vocabulary and can be used depending on context and style. My question is just about a "basic" diatonic approach.

In this particular example you might consider that maintaining the sequence over-rides the incongruous tritone. Or you might, indeed, flatten the upper note. Or you might consider the leading note to be an 'avoid' in a ii7 chord. Or you might like the vaguely Lydian sound of the B♮ (a Lydian ♯4th is becoming as much a jazz staple as a 'blue' ♭3rd used to be). Your call. The main point is that you're aware of the issue and listening to the effect of what you play.

My take on this is the B upper neighbor is not a great choice, not so much because of the tritone with the F but because it telegraphs the B in the G7 in the next bar and the C to B is the main difference between those two chords in terms of voice leading. If the B wasn’t a pivot note it wouldn’t have that effect. The A is the only note on a Dm7 ii chord that doesn’t work well with an upper neighbor. I would suggest slightly breaking the pattern and using the neighbor two houses down instead, A-C-A-F.

I’d say the Bb is out of play since you are looking for a diatonic approach but I’d pick it over the B sonically speaking if I had to choose.

In major, the B-natural over the ii chord I like a lot and would keep, but I would definitely avoid the Bb.

I tested these by first improvising over the ii-V-I, establishing C major in my ear. Then I moved to the melody patterns proposed. The B gives a very appealing "out" sound to the ii chord, especially in first inversion, but is clearly within the key of C and functioning as an upper neighbor.

Bb however, sounds quite bad to my ear. It's obviously out of key and clashes with the F in particular. My sense is that the ii chord operates to the ear a bit like a IV6 chord -- that is, as though we've shifted temporarily to F major. (This remains true for me regardless the inversion). Put another way, I agree with the interpretation that the Bb serves as FA against the F in the chord.

Jazz players learn very early on to avoid (read: be very, very careful with) FA in a major key.

8
Diatonic substitution and upper-structure triads for minor chords
7
what are the most beneficial drills for jazz piano?
3
Audiation: dealing with key changes when you hear in terms of solfege
5
How a chord is analyzed as a "chromatic mediant of the V"?
3
Is the melodic minor scale use as the basis of chord progressions in modern jazz?
2
Is this chord in Für Elise an example of a diminished seventh chord in classical music?
1
Jazz enclosures for minor iim7b5 V7alt im6
2
Two types of chromatic chord progressions?
1
Jazz walking bass for C to E7 (I to V7/vi)
2
Does this passage have a lydian sound?