How would you properly fret G and C on fret 3 of a bass guitar?

I have an exercise which requires me to play fret 3 G followed by fret 3 C at a tempo of 130. My natural inclination is to use finger 1 on G and then, without moving finger 1 (leave the tip on G), simply lower the back part onto C and then raise it again when I'm done.

Is this the correct way to accomplish that? I could certainly practice moving the tip of the finger back and forth but that movement seems unnecessary. Are there better alternatives?

One way to do this is called a "pressure roll", which is demonstrated by Adam Neely in this video (starting at 1:14):

He slides his finger from one note to the next without lifting it.

You can also use two different fingers to fret the two notes. I have small hands so this is usually the easiest option for me. Adam Neely also does this at 2:02 in the above video with his pinky and ring fingers, and then again with his middle and index fingers. 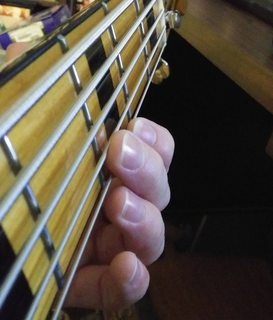 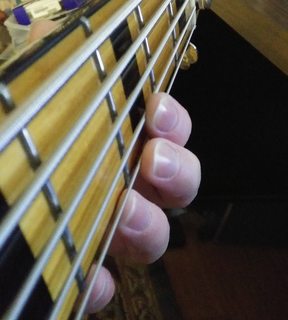 Quite probably, especially with bass, is that what you don't play is as important as what you do play.

Let me explain. It's very easy to make extraneous noises playing bass - other strings vibrating in sympathy, taking a finger off a just played fret, catching a string with the other hand/fingers.

With this in mind, most good players will mute everything they can except the note being played. They'll do this with whatever they can - it could be the plucking hand/fingers, or the fretting fingers. By sliding your finger across, which seems like a tidy move, you're letting one string go to favour the other. That can cause noise, as the string you moved from is now open. You could make sure the string just left is still muted by however much finger you can leave there.

The better way is to control each string with a separate finger. That way, the played string gets pressed onto the fingerboard, while the unplayed one gets muted, by keeping the same finger used for fretting touching that string. On the same fret isn't a problem.

That way, you will 'rock' your two fingers back and forth, alternately pressing and muting. Using two fingers from your plucking hand will mean you'll work up a good pace, and it'll all sound nice and clean. All you are left with is trying to keep a steady pace at whatever tempo is needed.

When the above is sorted, you might like to consider what happens with the open D and G strings. While you play your G note on the bottom string, that top G might start to vibrate - it may well do the same when you play the C note too. So the objective here is to mute those opens as well. Maybe with a couple of spare fingers from right hand, maybe a couple of spare fingers from left. Yours to experiment. Good luck, and clean playing!

The link you posted in your comment just shows open E and A. But if I extrapolate I guess you are just moving back and forth on the root of a I --> IV progression.

There is nothing wrong with rolling the index finger. But it wouldn't hurt to try and practice (slowly) lifting the index and crossing the string.

You have competing interests. On the one had you want a smooth transition from one note to the other. But you also want to be able to move and shift positions when needed.

Rolling a finger gets you where you need to be quickly but possible at the cost of (1) being locked in place, and (2) hearing the other note ring (which you need to control).

Lifting a finger can have the disadvantage of causing the open string to ring, especially at fast tempos. But I prefer this as it leads to clearer articulation of the note, at least for me.

You can manage extemporaneous sounds by a combination of releasing the pressure on the G without completely lifting the finger or laying part of the right hand on that string. Either way it acts as a mute for the G, or the open E should you choose to change string.

This issue occurs in guitar as well, especially classical where the scraping noise of the string and sympathetic resonance can reek havoc on clean sound.

Unless there is some direction in the exercise that indicates proper technique I'd practice both ways, slowly at first, working your way up to the fast temp.

Another option could be use two fingers, though that might be more work than needed for this simple exercise. It is a common exercise in classical guitar and upright bass to cross strings at the same fret with different fingers. Though in my recollection this is more of a control and dexterity building exercise and not the "preferred" way to play notes at the same fret.

If you are playing simple repetition of those two notes & do not need to be prepared to go anywhere else afterwards, then I'd use the two strongest fingers with best reach to that side of the neck, 2 & 3 (middle & ring). You will probably find that an easier reach than 1st finger, and considerably easier than unnecessarily dancing from string to string with any single finger if you don't have to. Don't make extra work for yourself - that will come later when you have more complex figures… & when your hands are more used to it.

That way you have the firmest fretting, with the best left hand damping of the other note.

If you need to go off elsewhere after a period of such repetition, then you do that in the last cycle by swapping to fingers best placed to set you up for the next line. No need to swap before you need to.

When you're reading it is effective to roll that finger over, as it maintains your position. When you're playing at a fast tempo it usually saves you time. As you go back and refine a passage you might decide to substitute an adjacent finger (in this case possibly the second finger) to facilitate movement to whatever note comes next. In any case, the technique of rolling the fretting finger over onto the next string is one you will use again and again, trust me.

Not the answer you're looking for? Browse other questions tagged technique bass-guitar fretboard or ask your own question.

11
How to hold a bass guitar while playing
4
What is the correct way to use your left hand on a fretless bass guitar?
7
Fixing fret buzz on Bass guitar, coming from the fret itself
1
Bass fret board position knowledge
7
Bass guitar - One finger per fret or not?
2
Hammer-on, technique, callus or both
4
Can you strum a bass guitar?
1
Brand new bass, annoying fret buzz
5
Bass Guitar rasgueado?
12
Bass guitar: how to avoid sound when string hits fret