My question relates to the chord pattern formulas.

For this Example we are commonly given these two formula patterns as one of the steps to construct chords in a key. I have been self teaching/learning and can't seem to find any information on the web to explain how these patterns are derived?

Anyone who can shed light on this part I would really appreciate. Thanks

Trying to encapsulate an answer that's concise and short!

For the purposes of this question, chords are most usefully defined as every other note from the root of the chord, with chords having their roots on each note of the corresponding scale.

Given a major or minor scale, the chords, given by the scale degrees comprising each chord are

3 It is conventional in a minor key to raise the 7th scale degree by a half step to create a leading tone. Thus the chord rooted on the 5th scale degree becomes a dominant seventh chord.

Let's look at diatonic notes starting from C. The white keys of the piano. These are the notes of the C major scale, and a similar geometry of intervals exists in all keys, it just starts from a different note and the white/black key distribution isn't so simple when you start elsewhere. The piano keyboard has been deliberately designed so that it is easy to play diatonic things in the keys of C major and A minor.

Diatonic chords are constructed as stacks of thirds, i.e. by taking every other note of the scale. Scale degrees 1, 3, 5 are the first chord. Scale degrees 2, 4, 6 are the second chord etc. Such a jump, skipping over one scale note, is called a third. A jump encompassing three notes in the scale. C, D, E : three different note names, so a "third". The jump from C to G is ... C, D, E, F, G: five different note names, so it's a "fifth".

Here is the first such chord in the C major scale:

As you can see, it starts from C, and the first interval in the chord, from C to E, is two whole tones. Which is four semitones. 2+2=4. The note E is called the "third" of the chord. Yes, it's the second note of the chord, but it's the chord's "third". Sorry about that. The jump C-D-E is a third, but C-D-E-F-G is a fifth.

Let's take the second chord of the scale:

As you can hopefully figure out, the jump from D to F is three semitones. It's not actually rocket science, even though it seems to be so incredibly difficult to understand, based on the utter confusion people have over it. From D to E, there is a black key, so it is a whole tone, i.e. two semitones. From E to F, there is no black key, so it is one semitone. 2 + 1 = 3. Three semitones means a minor third, which means that the stack of two consecutive thirds starting from D is a minor chord. 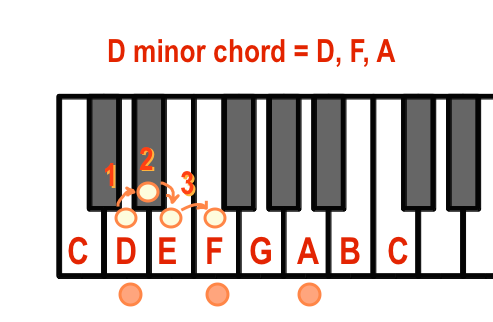 In the D minor chord, the jump from D to A, just like the jump from C to G, is a fifth. And it's seven semitones, a "perfect fifth". So, what makes a major and minor chord different from each other is the third.

Now there's just the one different case, B diminished.

With the help of all the above contributors and especially @piiperi I would like to answer my own question as a way to demonstrate newly learned knowledge that you have all taught me and hopefully make it easier for others trying to learn this as well.

As peri stated the process can be confusing to a newcomer counting intervals and then relating them to thirds. The aha moment was when I studied peri's statement that major or minor is defined by deciding whether the 1st third in the triad is 4 semitones (A major) or 3 semitones (Minor) or 3ST on both sides of the middle third (Diminished).

I was still very perplexed and kept going in circles with my reasoning as I tried to understand how one would come up with the cord pattern from scratch.

I wanted to be able to take any note (Key) and then use it to build a family of Chords.

To build chords in D Major, start with D in the first blank of the template then complete the scale. It is quickly apparent by looking at the whole and half steps there are errors needing to be fixed, therefore you proceed to make the required changes to match the pattern by raising a semitone where needed.

Step 2: Correct them to match the whole and half step intervals

Step 3: Build Chords for all notes in the scale

Step 4: Apply Major or Minor designations by looking at the intervals in the triad

For Minor scale you convert the major scale by lowering the 3rd 6th and 7th degrees by one 1/2 step. For a new student perspective it should also be noted that a degree should not be confused with intervals. A degree is simply a position in the sequence 1,2,3,4,5,6,7 for the scale. So in our D major scale 3,6,7 would be F#,B and C# therefore the D minor scale would be

Chords can then be built and we can discover the Pattern:

By evaluating the intervals in the triad as we did for the major scale above.

The patterns derive from the three note triads built on each tone of the gamut of letters A B C D E F G. You call these the diatonic triads...

...notice that the pattern is really one pattern of seven chords where major and minor are just segments within that seven chord pattern.

The seven chord pattern can theoretically ascend or descend infinitely which is represented visually more easily as a circle... 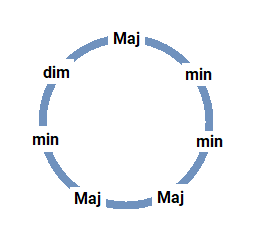 I tend to organize this using modes.

A diatonic scale has good distribution across the octave and (in some sense, both in terms of spacing and with respect to the overtone series highlighting thirds and fifths) naturally supports the notion of choosing every other note (thirds) to build a diatonic chord. These notes are then placed in parallel to finish the construction. I squint my eyes and see this as building harmonic elements by parallelizing melodic ones.

With that idea, we try taking a scale (melodic element) and putting it in parallel with other scales. We'll choose modes (relative to the root degree) for the scales and use the reasoning above to choose every other mode. Hence, we add modes in parallel according to some cyclic order of (1,3,5,7,2,4,6) to build progressions of diatonic triads, sevenths, etc... A triad example in C-major:

From the intervals, we get an ordering of MmmMMmd chords being produced that repeat (i.e. it's cyclic). So, we can see for example that the natural minor case is already written in the example, we just start at the A on the bottom row (which represents aeolian and a parallel order of 6-1-3), making mdMmmMM.

A lot of these answers are only partially correct and some have incorrect information in them. I'll try to clarify.

It's important to understand that chord quality and construction is independent of scales. Yes, both are defined by intervals, but their construction is mutually exclusive.

A scale is a sequence of intervals. In western music, there are Major scales and three types of Minor scales. Each type has a unique sequence of intervals that define it (as many of the posts here discuss). A scale can become a Key when the root note is assigned. For example, the Major scale becomes the key of "C Major" when you define "C" as the tonic of it. But all of this is irrelevant to chord construction.

Chords are also constructed of sets of intervals. Chords are simply 3 or more intervals intended to be played in unison (or rapid sequence as in strumming a guitar). A Major chord is defined as the Unison, a Major 3rd, and the Perfect 5th (technically a Minor 3rd above the first Major 3rd). Technically, these are not intervals of a scale, though a lot of people think of them that way. They are simply the number of semi-tones (or half-steps, if you like) between the notes.

If you are looking for which intervals chords are constructed from, this page lists a couple of dozen chord types and their intervals: https://www.internetchorddatabase.com/Reference.aspx

I think it's important to understand the structure of the major scale and the answer given by Son of Fire makes this explicit. You are not really given a formula for the chords in a key in my opinion, you are given the definition of a key, and a formula for building a chord. From these two kernels the rest follow. And since major and natural minor are related it's no surprise that the set of chords is the same, just in a different sequence because natural minor scales and major scales are related, relative minor starts on the 6th degree of the corresponding major.

This follows for all the modes, as pointed out in other answers. If you ask what are the chords that naturally occur in Phrygian just start the major scale sequence on the 3rd degree and keep going.

Try applying the formula to other examples and you will become proficient at it and understand the relationship.

1
Triads derived from the different types of minor scales

41
Why do many songs in major keys use a bVII chord?
6
What does "dominant" mean in music?
6
How do I tell which power chords go with a key?
1
How do I choose the type of chord for an specific scale?
3
Need some help with perfect fifth power chords
3
Why are there notes in my guitar chord book that are not part of the chord's formula?
3
How to construct functions and chords of a scale?
3
Does melodic minor ever function as a key (or tonality) in of itself?
7
Could "E7(♯9)" be plausibly called "Em7(♭11)" or "Em7(add ♭11)" as well?