I'm trying to figure out how to "properly" use voice leading. Specifically, I'm wondering how to progress by a single step (is that the correct way of saying it?).

For example, say I want to move from CM7 to Dm7.

I've read that what you ought to do is to keep any common tones, and then move any tones not in common by the smallest distance possible. So, in the example above I think it would be like this.

The C stays the same, and everything else moves down by one tone. 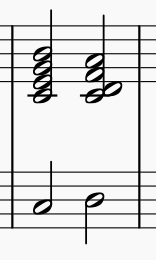 The thing that's bothering me here is that the E to D and the B to A create parallel fifths, which I've read (at least in classical voicing) ought to be avoided. Is that the case? Or maybe the movement of the root, or something else makes it OK?

Moving from Dm7 to CM7 seems to create the same problem, only in the opposite direction.

You, of course, get the same kind of movement using triads. 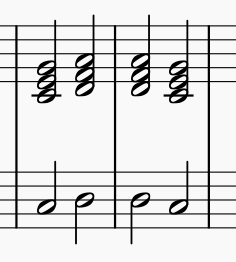 Here everything, including the root, moves in the same direction.

So, I'd like to know if the examples I gave above demonstrate proper voice leading technique from a classical perspective. And if not (e.g. It should be avoided due to the parallel fifths) what would be the "correct" movement.

The study of voice leading is a deep topic with a close relationship to counterpoint; it's hard to summarize briefly. In a "real" piece of music, even one that adheres to typical common-practice-period-type rules, there are many, maybe even an infinite number of, "proper" ways to move from CM7 to Dm7, taking into account what all the voices might be doing during the chord change. What would work well in any particular context has a lot to do with what's going on otherwise in the music around that time.

That said, your goal is generally to keep each voice independent while moving them smoothly but not monotonously. There are precise technical ways of defining terms like "independent," "smooth," and "monotonous," but I recommend reading a counterpoint manual for that sort of thing. In terms of the points you brought up, avoiding parallel 5ths is out of a desire to keep the voices independent (the 5th is such a consonant interval that voices moving together in 5ths sort of "merge"—think of power chords in rock music). By the same token, it's generally good to balance parallel and contrary motion between the voices, as opposed to having everything move in parallel (i.e. the same direction, as you say).

All of your examples start with the C chord in root position with closed voicing, and you seem interested in keeping all four chord tones in both cases. You also say you want all the voices to "progress by a single step", which from your examples looks like you want all the voices to move stepwise or by step (that's the technical term; the opposite is by leap). Those are pretty extreme restrictions that I wouldn't say reflect "proper voice leading practice" necessarily—they're not improper, per se, but they get in the way in some ways.

In particular, I don't think there's any reason to have all the voices move by step. Again in the interest of keeping voices independent, and also to gives each voice an interesting line, it's good to have them move by leap sometimes. You generally don't want all of them to move by leap together, because that sounds rough (the general term for voices moving frequently or mostly by leap is angular, though that's a neutral descriptor in terms of "correctness" or whatever). As you've discovered, though, having them all move by step tends to create problems, and if you keep it up for several chords the music may get a bit dull. So, I'm going to show you some examples with a bit of leaping, because I'd like to encourage you to get comfortable with that and it closer reflects common practice.

Exactly as written, some of these changes might be unacceptably dissonant to a typical 18th-century listener or what have you, but (a) music of that time would generally solve that problem by having the voices move more during the chord change and (b) who cares if it sounds good to us today? :P

Also, the last change I showed has a unison between the bass and the lowest middle voice, which in some circumstances would be undesirable (again, keeping the voices independent, etc. etc.), especially since the bass leaps into it, although this is mitigated by the fact that the other voice is stationary. This is one of those places where context really matters, though—the way you handle what comes after that will determine if the bass vanishes into the other voices or maintains its independence. It also would be a bigger issue in e.g. a solo piano piece than in a piece for ensemble. Also, in "real life", you might want the bass to vanish sometimes. As a composer you have to learn to make judgement calls about things like this.

Parallel fifths are classically incorrect in the examples you give. The general way around it is to leave a note out of one of the chords -- typically the chordal 5th, which contributes least to the overall sound.

In the CM7 to Dm7 case, leaving out the fifth of either chord solves the problem.

Classically, in the absence of additional context, the B would resolve upward to C.

In this case, the C (most likely) or the E in the CM7 would be doubled.

I've read that what you ought to do is to keep any common tones, and then move any tones not in common by the smallest distance possible.

Yes, except for one case: when three voices move, or you can think of it as when root progression is by step.

Let's look at you case, but with triads. Normally if roots progress by step the upper voices move in the opposite direction of the bass... 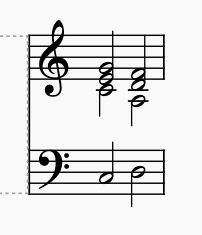 The important point being that one of the voices is moving by a third rather than a step. That is normal good voice leading.

When we add in the sevenths we get... 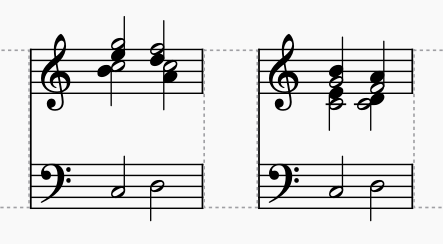 ...which is your original progression with parallel fourths/fifths (I used black noteheads to highlight the parallel voices.)

Omitting/doubling tones is the workaround as @Aaron suggested. But I think the specifics depend on whether you really want a 5 part texture or just 4. But in either case it seems to me you should omit roots somewhere... 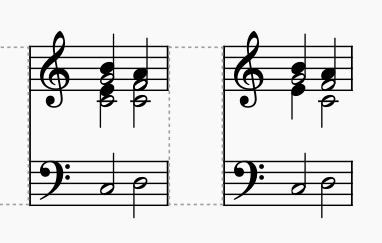 It seems to me you are asking about voice leading principles, and so I think the 4 part example is best. The chords are balance with each one having the full 4 tones of seventh chords, and the movement of the upper voices in contrary motion to the bass for a root progression by step exhibits an important voice leading procedure.

One final thought. Personally, I don't think the parallel fifths of your initial progression are a problem. The progression CM7 Dm7 seems to me more modern in style where traditional voice leading rules aren't strict, or are abandoned entirely. Technically you can work around the "problem." But, it's sort of an apology to voice leading. If you aren't trying to authentically write in the style of Palestrina, Bach, etc. you can feel free to work in a modern style.

The rules of counterpoint and voice leading are subject to prioritization. The prohibition against parallel fifths and octaves has higher priority than the principle of using common tones and stepwise motion.

In classical keyboard music that adheres to these rules, you will not find many pieces in five-voice homophony as is your example. Where you do have five voices, you will find suspensions and varied rhythms, as in the 22nd prelude (B-flat minor) from book 1 of the Well-Tempered Clavier.

It's a question of style. By the nineteenth century, you can find examples of piano pieces that use more thickly voiced chords for their aural texture. At first they tend to rely on changes in the number of notes in each chord so you can avoid parallel fifths by selective voice assignment. For example, if the second chord of your first example had no D in the right hand, the voice on the E flat would be seen as moving to the F. By the early 20th century, you can find examples of outright parallel fifths, such as in the second movement of Prokofiev's fourth piano sonata.

Not the answer you're looking for? Browse other questions tagged piano classical-music voice-leading chord-voicings or ask your own question.