I am playing on a gCEA concert ukulele. As a relic of probably incorrect self-taught guitar playing (D major), I am faster to a G major chord by playing a partial barre chord. That's index finger on fret 2 across strings 2-3-4, and ring finger on fret 3 of string 3. The left thumb supports the partial bar on the backside of the neck. 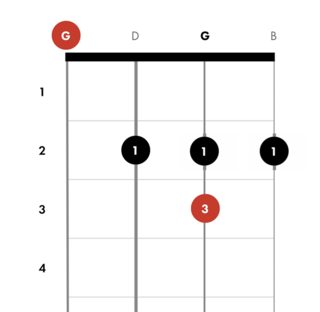 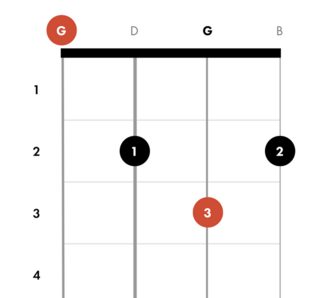 I think it is beneficial to learn different fingerings and not restrict yourself to one. There is certainly not one right way to play a chord and the most important thing is that it sounds good.

The main reason why ukulele chord diagrams will almost always show the three-fingered grip is, practically speaking, tradition. Almost all ukulele players will learn the G chord in this way, so it's the logical default choice when one needs to demonstrate a universal way to play the chord.

With the traditional three-fingered grip, the player has more control over each individual note as a result of each finger fretting just one note. This can be used to play an open string momentarily by lifting one of the fingers, to apply the necessary force on the strings more efficiently (this makes it great for first-timers), and even to possibly leverage a bit of vibrato. This chord grip has the fingers angled back a bit rather than straight-on.

By partially barring at the second fret, one can keep that angle straight-on, which might be preferable in some circumstances. The remaining fingers can stretch farther down the fretboard than would otherwise be possible with the traditional grip as a result. Trills from the root to the major seventh are now possible, and going from G to Gmaj7 is now a breeze as pointed out in another answer. G7 and G6 still necessitate a full reposition of the hand, however.

One other thing speaking for the trad grip is that it forces one to play with three fingers. Not all chord grips can be played with two fingers or fewer, and at some point it will be necessary to learn chords that do require the sort of twist shape that the three-finger G uses. If you ever want to play a diminished seventh chord, for example, this muscle memory is going to be helpful.

Other options for a good G chord exist, even down in roughly the same hand position. One of my favourites is the barre-chord version 4232, which is a lot like the partial-barre. Fully barring the 2nd fret, use the fourth finger on the G string and the third finger on the E string. This shape is actually moveable, meaning it can be played anywhere on the neck, and it moves naturally to all sorts of notes and other common chords. Leave off the ring finger to turn it into a beautiful Gadd2 chord, for example.

10
Is it OK to play a G chord on the Ukulele differently than the standard finger position?