Which Fret do I Indicate on an up-the-neck chord chart that is using a capo?

I have a website that allows you to transpose songs and will generate the appropriate chord charts. In doing so, I have come across a question I can't find an answer to with regards to using a capo to change keys. 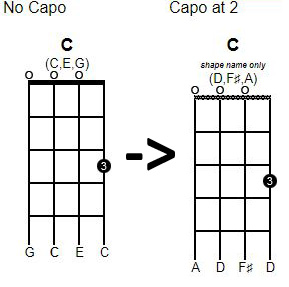 Note the pitch names for each string have changed, but the shape name is still the same. This is what people want when using a capo (same chord shape, different pitches).

Typically chord charts show a thick dark line at the top indicating the nut, but for capoed shapes, I use a hashed line. It serves the same purpose, but is visually different.

Further, sometimes shapes are so far up the neck of you don't see the nut in the chart, so I have to indicate which frets are visible. For example, here is a C Major chord up at the 7th fret.

Note, that the top of the chart indicates a thin line because it is not the nut.

Ok, here is my question. When displaying a chart using a capo for a chord shape far enough up the neck so the nut doesn't show which fret number do I display? Do I display the physical fret on the neck of the instrument or the number of frets above the capo? 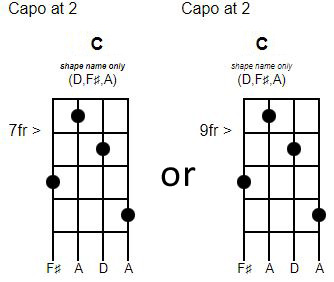 In this example, I am capoed at the 2nd fret, so I am phonating a D Major chord, but which fret number should be displayed? Fret 7 because I am 7 frets above the capo (similar to be being 7 frets above the nut if no capo was there)? Or Fret 9 because I want to fret at the 9th fret physically on the instrument? Make sense?

Thanks for your expertise!

A capo changes the transposition of the instrument, and all notation should be written as if the capo is the nut. Note there is an accepted way to indicate that chord boxes are not at the nut. It‚Äôs with a Roman numeral indicating the fret number at the top of the chord box (not the lowest fret that is fingered).

Personally I think the string names should never be changed when notating with a capo because that makes it seem like a different tuning is being used. I find most of your examples hopelessly confusing.

Side note: I thinking ‚Äúsounding‚Äù is commonly used instead of ‚Äúphonating‚Äù in English. The sounding pitch is what you hear, which isn‚Äôt always the same as the written pitch.

18
Guitar chords high on the neck
12
Which chords are recommended for checking guitar tuning?
7
Which fret do I place a capo on, to play Eb music using C chords?
2
Transposing on a guitar
4
How to play chords from a tab where a capo is used
4
In Guitar Pro, how do I specify fret numbers for a chord?
3
Does the root note fall on the same place using CAGED system on guitar?
1
Understanding How the Guitar Capo Changes Chords
4
Meaning of instructions on a capo box