Does a desktop speaker with subwoofer sound better on a small room? [closed]

Ask Question
Asked 8 months ago
Active 8 months ago
Viewed 63 times
2
Closed. This question needs details or clarity. It is not currently accepting answers.

I'm planning to buy a Logitech z333 80 watt desktop speaker with a sub and just wondering if it sounds better in my small room. Will it still cause a reverb or something else?

Most of these cheapo Logitechs & the like have poor crossover characteristics & a decidedly limited bass extension with odd humps right where you don't want them - 100-200Hz. That tends to make them sound kind of "woofy". To make matters worse, the top end is what I can only describe as … scrarky.
If you're not desperately fussy about absolute accuracy, you can generally fix them up a bit with an EQ curve on your computer output.

This is the one I use on similar speakers on a non-critical system, to tune them to the room…
I just did this by ear, but it doesn't sound too bad now. Note that nothing below 50Hz or above 10k makes any noticeable difference whatsoever, so the curve just peters out at the ends. 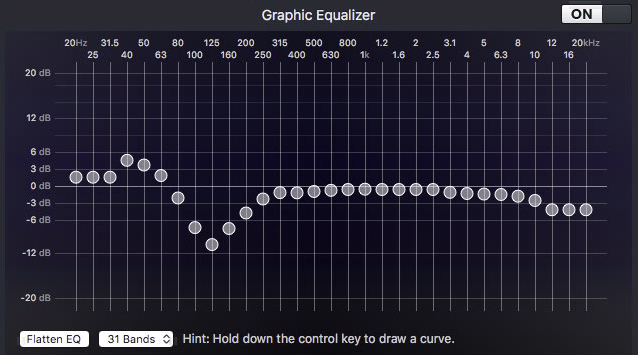 At the end of the day, you're not going to get studio-quality monitoring for 50 quid, or even 500.

Late addition
As to whether these will sound better or worse in a small room - well, they can't really push enough actual bass to cause massive standing wave issues. You do need to take that 100-200Hz out because in any room they just bark that out too loud, & if you turn the sub down to compensate, lose everything else really below about 250Hz, because the crossovers are so high to compensate for the tiny 'tweeter' units that barely reach down to 300Hz.

If you put something this small & under-powered in a large room, it will just get lost in the corner. They're not really much more powerful than an iPhone in an empty mug.

There's one additional gotcha on a lot of these low-end 2.1 systems (though not the specific one in the OP by the looks of it) that the sub is downward-firing, so the actual bass response is massively dependant on what your floor is made of & covered in. Hardwood floor vs heavy carpet == completely uncontrolled differences in apparent response.

I would avoid that particular brand of speakers, but if the room is small and there is no acoustic treatment, then it is very difficult to hear the bass properly.

Although untreated rooms have many problem frequency areas, it is very apparent in the bass region. If you walk around listening to the 50-200hz region it will drastically change. Sitting nearer a wall will often sound like a subwoofer is on.

If it's for the purpose of monitoring/accuracy, go for headphones or acoustic treatment before buying any subwoofer. And certainly not a cheap one.

Not the answer you're looking for? Browse other questions tagged speakers or ask your own question.

3
150w 8ohm speaker on 300w 4ohm channel - have I done my maths right?
1
Peavey SP-2A Speaker Repair
6
How to monitor a song with a low budget
5
What should be considered when getting a band PA?
8
How to connect a line signal to a guitar amp?
1
How does speaker design affect audible sound?
1
How could I make this studio setup work?
2
Which way should I point subwoofers in a small-medium sized venue?