What's wrong with my wave? It looks fat

I compared the waves of the track of someone else and my own and my track is very thick. Can you please explain who knows what's wrong with my wave? I think a thick wave like this means a lot of bass? 1 -mine 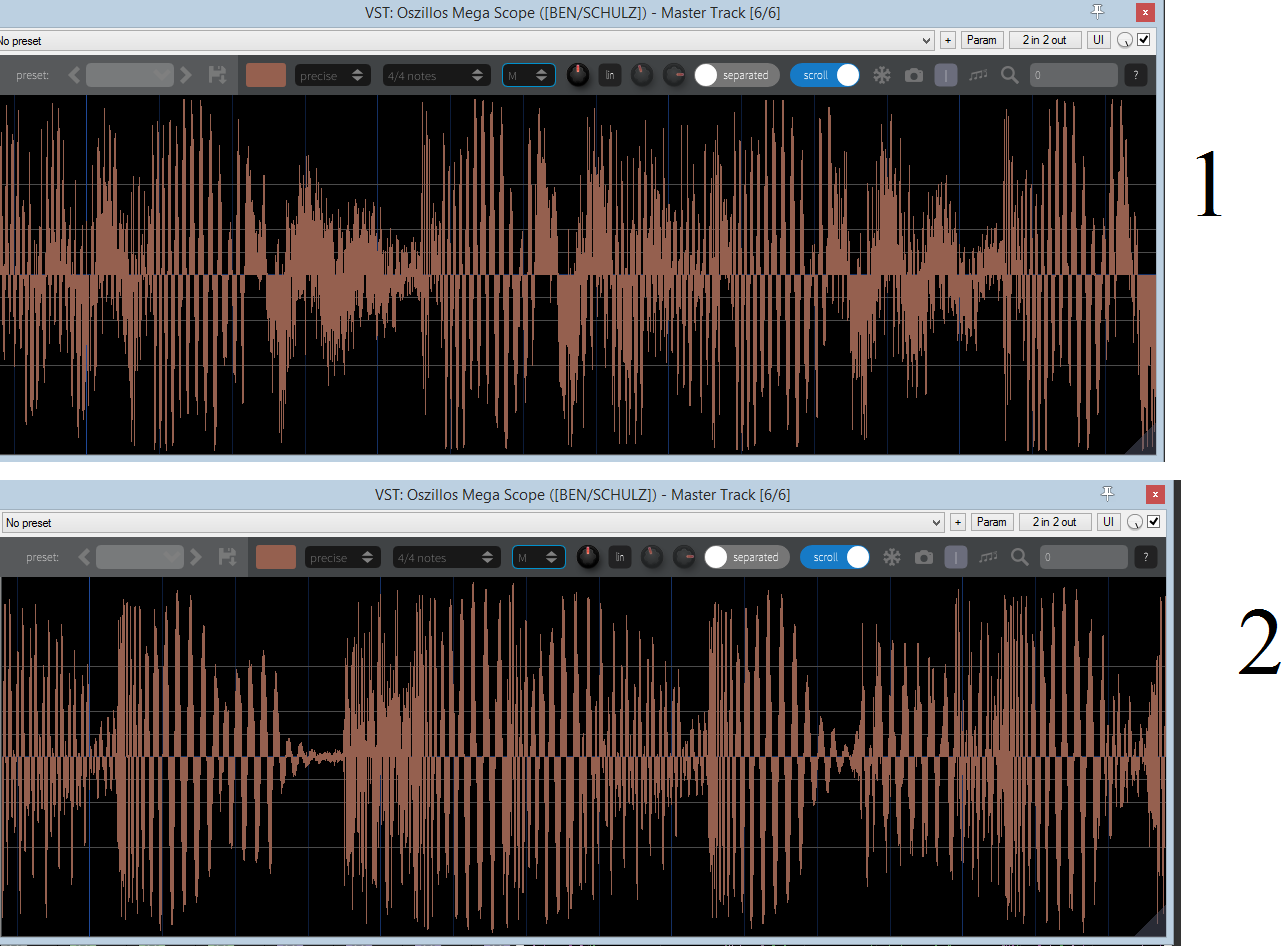 The waveform documentation page for Audacity give a concise overview of what information is in a waveform graph. That pages is specific to Audacity, but I think the concepts covered will apply to most any waveform view. Basically it's a graph of time an amplitude.

You mention "fat" and "cycles" but it isn't clear to me what you mean. I think you are comparing...

...which has wide looking humps.

...tall looking spikes with space between them.

My expectation of these two is the first would have a more sustained sound and the second would have more space (quiet) between sharp attacks.

It's hard to say more. Sometimes the picture is not what you might expect. A sustained sound might be fairly low in the mix and on the graph it wouldn't rise up very high. It might seem to be missing in the graph, but it could be clearly heard.

You might want to do a bunch of test files to see what their graphs look like: a totally dry drum track, then one adding heavy reverb, just a sustained sound like an organ, a guitar power chord fading to zero, etc. etc. You can do the same, but specifically look at effects like reverb, delay and compression and how they change the waveform.

If you look at that instruments separately, you might get a better sense of what the waveform represents, and how the separate parts come together in a mix.

They say you can't tell a sound by its wave - but sometimes you can guess a bit, based on having seen a lot of them.

This to me looks almost criminally distorted with a very large sub-bass fundamental & massive smearing high frequencies, almost unrelated to the fundamental pitch. 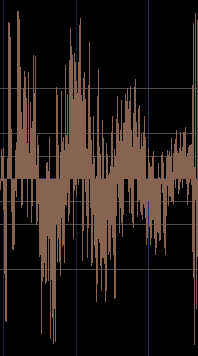 …and, no, I honestly couldn't tell you what each would sound like exactly, but I would guess each is pretty much a 'single note' as opposed to a snippet of say a rock band or an orchestra. The first note is going to be harsh & smeary, distorted, the second considerably cleaner.
If someone told me the second was a clean-ish guitar, I'd believe them. I've honestly no clue what the first could be.

However, based on that analysis, then "thick" is distortion; many unrelated frequencies fighting over the same domain.

When you're zoomed in that far, then if you do know the actual time domain on the x-axis, you could go to the tedious trouble of counting the peaks to know what note it is (not something I've ever actually felt inclined to do ;)

First of all, NEVER DECIDE WHAT IT SOUNDS LIKE USING THE WAVEFORM. Waveform can possibly be used to monitor compression, limiting, or clipping. But I'd say that's about it

Both of the ways, like how comments say, Have nothing to do with Bass. There's no way you can look at a waveform and say "oh this one's got a lot of these frequencies". Some people call it "thick" if they hear a lot of bass but that has nothing to do with how thick the waveform looks like. If you need Bass and see why yours doesn't have, more appropriate (if not by Ear, Ear's always the best way) would either a spectrogram or more preferably the display that EQ plugins show you (not sure about the name for it)

Not the answer you're looking for? Browse other questions tagged production or ask your own question.

15
Tips for increasing loudness while mastering in Ableton Live
5
How do you achieve this bass heavy effect?
9
Making all elements clearly audible in the mix
6
Efficient strategies when recording alone
4
How can I create bass like in “HandClap”?
1
Where can I find this snare drum sample?
6
Do DJs ever use a third track to keep a third kick going for several songs or even entire sets? Or is the effect of “silkiness” achieved another way?
2
Where can I find useful stuff to learn music production?
2
How can I make my vocals stand out without ducking the instrumental in my EDM drop?