What is the correct terminology/notation for playing notes in a chord at the same time, and not as an arpeggio?

It is very common for interpreters of sheet music — especially string players — to roll chords. What is the notation to specify that all notes should sound at once? I had thought it was a square bracket around the notes, but learned today that that actually means the opposite.

I had to hunt down the definition, but I found some sources.

Secco means dry in Italian. In music the "dry" meaning of secco is without ornamentation. Non-arpeggio in plain English. Indicated by a bracket before chords similar to the wavy line for arpeggios, but with the opposite meaning.

I found definitions with general, recitative, and harp contexts.

Pronouncing and Defining Dictionary of Music 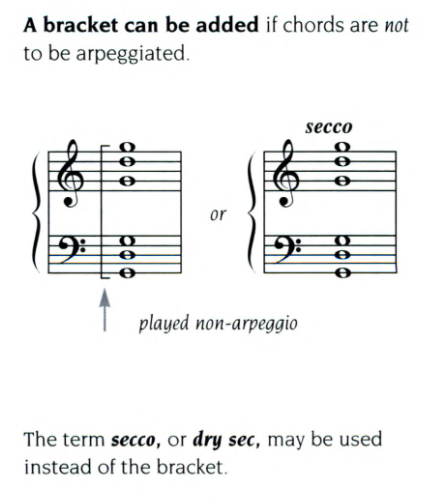 I could find only a few brief references to secco specifically in piano music, but I don't have access to a proper music library. I think the terms is understood in any chord context regardless of instrument.

Block chord is a term sometimes used in that sense, as opposed to arpeggio, or even "broken chord".

That mostly depends on the instrument and that instrument's performance practice.

I'll only answer for the instruments I know about, but that should explain how the question might have different answers depending on the target.
I will also - obviously - leave out anything related to monophonic instruments, for which specifically written explanation should be written if some level of limitation is required to the allowed freedom left for the interpreter.

I've had training as a violinist, a percussionist and as a pianist, and all of them can potentially have different interpretations of a "chord".

A violinist that sees a chord in its sheet music (assuming that there's not enough known and established performance practice for the piece) has to decide on its own how to play it, unless specifically written in some form of premise, introduction or key/legend of the piece itself: for instance, if it's a bichord that can be easily played using two contiguous strings, there's almost no doubt.

A pianist will rarely have doubts, as there's enough consistent repertoire and existing notation convention to specify that, assuming that physical limits are being considered: writing a chord that has notes that can't be physically be played at the same time and without any indication, means relaying the performer enough freedom to choose how to play them (or even which notes are going to be played).

That said, as with any rule, there's no rule.

It mostly depends on the instrument, so you should better talk with an expert in that instrument's notation, which might be very and even dramatically different than others, since some notation symbols are not consistent with different instruments.

Then, you can (should?) always make a premise for your piece, accurately describing how certain situations should be faced.

For instance, with percussion instruments (and most of modern music that uses non-standard performing practices), a well-written score also has a well-written premise specifying how the notation should be interpreted.

You can even decide that the normal elliptical note head means something else, and nobody could tell you that it's "wrong" (most of your player would blame you anyway, but that's another story).

Not the answer you're looking for? Browse other questions tagged chords notation terminology arpeggios or ask your own question.

3
Terminology for sounds and notes
13
Correct terminology for chord inversions
13
“Correct” notation for a minor chord?
8
Can bass chord notes be different octaves after playing the root?
2
Are these dotted and tied rhythms equivalent?
5
Key-agnostic voicing-based notation (piano)
0
Terminology: Notation of time in 'measures, beats, and ticks'
0
Notation for bowed instrument to play chord from high to low
5
Piano arpeggio symbol: split vs drawn through
4
The proper way to mark sustain pedal for MuseScore playback and live performer?