Understanding the Construction of minor7 Chords on Guitar

I was watching a tutorial for Viceroy by Mac DeMarco with the following chord construction for a C#minor7 chord with the capo on the second fret: 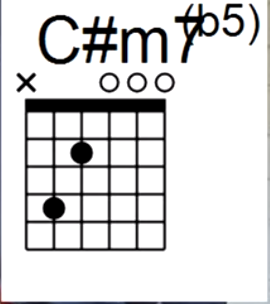 I was confused by this chord construction considering I know that a C# minor scale consists of notes:

With a C# minor chord consisting of notes:

With a C#minor7 chord consisting of notes:

Any help with my misunderstanding would be appreciated. 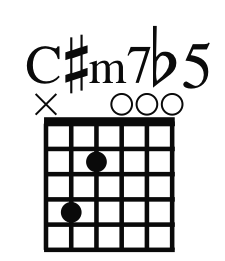 "Educated" jazz snobs dislike writing Em6/C#, but once again we see that beginners do not even see the "b5", let alone understand what it means. Em/C# or even just plain Em would retain the original meaning better and do less damage than C#m7 without flattening the fifth. Depending on the melody a C#m7 can sometimes work, but it also changes the mood.

The subject asks about construction, so here are the components of the chord. On the upper strings there's an E minor triad E, G, B, and then there's C# in the bass. 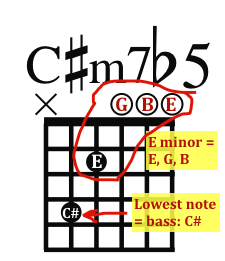 If we compare this to a regular C#m7 without the flat five (following a similar voicing), we see that now there's an E major triad E, G#, B, and the C# in the bass. 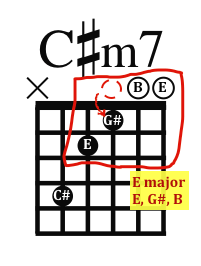 At the same time, there's another perspective to see C#m7-5: there's a C# diminished ("C#m-5" or flat five), and there's an added seventh 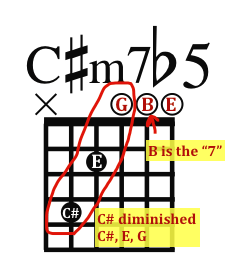 And finally, here's a different voicing for the same chord. I think this is not only easier to play, but it sounds nicer as well: 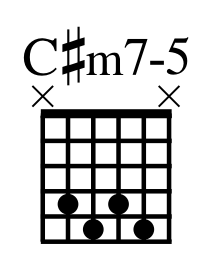 The only downside with this is, the Em shape isn't so clearly visible.

For completeness, maybe I should add that there are many different ways to write a half-diminished seventh chord as a chord symbol, e.g. C#m7-5 or C#m7♭5 or with a circle Cø7 or Cø. See https://en.wikipedia.org/wiki/Half-diminished_seventh_chord#Chord_symbols_and_terminology

If you look carefully at the chord symbol you'll see the chord is C#m7(b5), so the fifth is flattened (G#->G). The complete chord is C# E G B. You don't need a capo, the diagram shows the notes without a capo.
Possibly the chord is intended to sound as D#m7(b5), in which case you'd need to use the capo on the second fret and finger the C#m7(b5) chord as notated.

The signature m7b5 is the tetrad of the ii degree of a minor scale or the vii degree of the major scale: C#,E,G,B is the 2nd degree of B-minor respectively the 7th degree D-major key, like there e.g. Bm7b5 is ii7b5 of am and vii7b5 of C.

Not the answer you're looking for? Browse other questions tagged theory chord-theory chord-progressions chord-inversions or ask your own question.

2
How to give voice into a chord progression?
17
On a guitar, what keys correspond to different capo positions?
5
Confused about C6/9 guitar chord
4
Chord construction using the minor scale
0
What scale goes with the F#-7b5? I'm double checking what iRealPro has given
3
Which chords belong to a mode?
6
Letters m, n and v above roman numerals in functional harmony notation
1
Rules for making guitar chords playable on the fretboard
1
Understanding How the Guitar Capo Changes Chords