(How) Do the terms "open" and "close" position apply to chords with multiple doublings?

Based on Open/Close Position Chords: What I am missing?

Do the terms apply beyond that? For example, in a comment on an answer to The F chord is F0, A0, C1. If you change the octaves of one of the notes, is it still an F chord?, the following voicing is proposed:

Would this be open or close position? And why?

One can imagine all sorts of other doubled voicings that don't fit cleanly into the usual definitions. There can also be incomplete but unambiguous chords, such as seventh chords, which often omit the fifth, and, in context, even major and minor triads can omit the fifth and retain their essential character.

I'm looking for a general answer to whether, when, and how the terms "open" and "close" apply beyond the basic definitions.

While these terms are most commonly used in introductory textbooks to describe three-note chords or four-part harmony (with bass treated as a sort of separate part of the texture), I've definitely seen the terms used with other types of chords on occasion.

The implication, to me, with "close position" is that all notes are clustered on adjacent chord tones. As noted, the bass is sometimes treated as independent, so its location doesn't matter. Also, I'm pretty sure I've seen the term used to refer to a subsection of a texture, e.g., "these three instruments are in close position," where other instruments may be further distanced.

So, it's not necessarily always applicable to an entire texture. It's referring to voices that are directly placed on adjacent chord tones. If there's a gap where a chord tone is skipped between adjacent voices, those voices -- however many there are -- are no longer in "close position." It seems reasonable to extend this definition to more than three voices, again as long as there are no gaps.

Anything else, I suppose, is by definition "open," which is sort of how that term works with 3 or 4 voices anyway. These terms certainly aren't meant to express great nuance in possible texture/voicing. There is also an informal sense where "open" means something like "spread out," again referring to some group (or subgroup) of voices that tend to have greater gaps between the voices, rather than being on adjacent chord tones.

When referencing an entire large chord with 5 or more notes, these terms aren't generally that useful. My sense in that case is that they can occasionally be used to refer to subgroups of voices within a larger texture. The only time the terms might be useful for the whole chord is if all the notes were on adjacent chord tones (and thus all "close").

But the problem is once you get textures like that, you inevitably start to have doublings at the unison as well as at octaves, and that seems to disrupt the whole classification system -- wouldn't three or four voices in literal unison be the "closest" possible? Yet, I've never seen the term used that way.

I don't know that I can come up with a source for the above definitions, as it's mostly informal usage when it occurs outside of an introductory textbook. But I could dig around and find some examples if necessary. 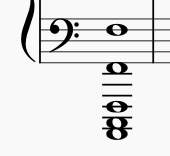 There seems more to talk about with that chord than whether it's in open or close voicing!

Anyway, if the issue is one of sticking hard and fast to a definition, the thing I notice is the question brings in a matter of pitch class. The idea is any voices within a pitch class should be treated the same (or apparently octave doublings within a class are to be reduced to some particular octave.)

But that's a problem for two reasons. I've never seen pitch class explicitly stated as a factor in defining open/close voicing. But the other more important thing is you must differentiate octaves in order to distinguish open/close voicing.

F4 A4 C5 is clearly close, and F4 C5 A5 is clearly open. If we eliminate the octaves we just have F A C and F C A and it simply is unclear about the specific voicing.

So, while the OP wasn't specifically suggesting how to reduce the octaves and most definitions don't get into listing octave numbers, showing lots of octave doublings, or mentioning pitch class, it's clear that specific octave must be considered to determine open/close voicing.

Not the answer you're looking for? Browse other questions tagged terminology chord-voicings or ask your own question.

8
Open/Close Position Chords: What I am missing?
1
The F chord is F0, A0, C1. If you change the octaves of one of the notes, is it still an F chord?

4
What do the terms "pitch relationships" and "vertical dimension" signify in relation to harmony?
8
Open/Close Position Chords: What I am missing?
3
Do descending drop chord voicings in the blues work?
19
Exactly what does "diatonic" mean?
3
When the tones in a chord are packed together, is it in "Close position" or "Closed position"?
4
How to characterize voicings of "cowboy chords" on guitar?
0
'Extended Secondary Dominant Chords'?
7
Names of different definitions of key
9
What is the origin and original meaning of "tonic", "supertonic", "mediant", etc.?