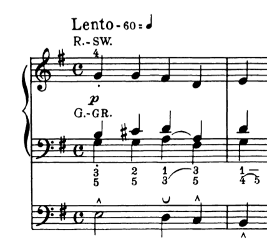 My aim is: to get fingerings for both voices on the same side of the staff (above or below).

If I try to force them in the same direction by always using ^ like c4^4, then the layout algorithm doesn't respect that there are 2 voices in the staff, and both fingerings go in the exact same position – i.e. they get overlaid over each other and aren't readable anymore.
(The same thing happens if you try with the \override Fingering.direction = #UP option)

Another idea I had was to separate the fingerings into a 3rd voice context like this:

So the only way I have found to get what I like, is to add fingerings for both voices to the upper voice like this c4^5^4, but this is not the best to maintain.

What is a better solution? 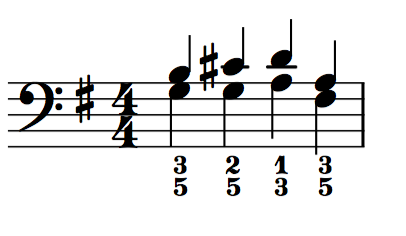 However, if there are lots of low notes for these voices, this isn't going to be a good method.
But, if there are just a few notes that are too low in the staff, you can tweak them manually.

11
Top-aligning scores inside Lilypond \markup blocks
4
How do I get the bar lines in successive staves to align?
3
Lilypond "elevation" of rests after two voice passage
3
Voices doubling a dotted note in Lilypond
3
Unplayed 2nd voice in notation - spaces or rests
2
One staff with two sections and two voices
6
Placing beam between staves with autochanging voice in LilyPond
3
Force bar numbers below the staff and chord names above in LilyPond
2
LilyPond: Is it possible to create an instrument switch that goes from a Staff to a DrumStaff and back?
6
How to write a slur to nothing in LilyPond?