I am a beginner/ intermediate guitar player and today I started to learn how to play Seek and Destroy from Metallica, as shown in this tablature

Other than that, I have seen one or two tutorials on how to play seek and destroy. And I saw examples of both strict alternate picking like this one and other tutorials where mostly down-picking is used, like this one

I know that in guitar there is no right or wrong. Though one thing important to me is to stick to the 'most appropriate' technique since the beginning i.e. avoid developing a bad habit. I do know how to alternate pick and I would say in most of the occasions it is the most natural thing to do, but that's is not the case while playing this song.

For the sake of clarity, I am talking about alternate picking when moving from one string to another (considering down-picking only for strokes in the same string), for example, in the intro below:

Would it best to alternate pick (is this the most appropriate technique? For me it is somewhat less natural) or is it totally acceptable to down pick only.

Same for the first riff: 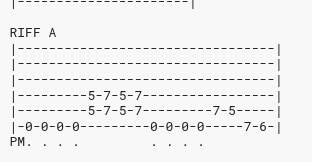 When moving from the A to the E string i.e.:

Would it be best to DDUD (D: Down stroke, U: Upstroke) or if I down pick only (DDDD) is it also acceptable (perhaps better?)?

See this old video of Metallica:

Both Hetfield and Hammet play the parts you mention by downpicking every note.

James Hetfield is known for his downpicking technique, and definitely worth to study. Check also Jeff Waters (Annihilator) and John Browne (Monuments).

hey so the youtube video isn't doing strict alternate picking -- check here, i also played through the riff (and your riff is making it harder as well)

the first 00 (AA) should be down up, the second a should be upstroke (as the down beat is in rest). also note that the 89 hammer doesn't include the 5 when watching metallica play it in the video posted above.

What you're asking about is an elementary application of the techiques called either “sweep picking” or “raking”. On guitar, these seem to be considered mostly ornamental techniques, i.e. not used for playing successive notes of a given melody but instead to approach a single note with a flush of strokes across multiple strings in the same direction (either muted or with defined pitches to make it a quick chord arpeggio).

In fingerstyle electric bass, raking is called the controlled and consistent use of the same finger twice when playing two sequential notes in a melody the last of which is one string lower, such that this finger can just continue in one movement instead of preparing two separate notes.

So, should you do it? You need to decide yourself, but I'd say it can't be a bad idea to practice it. Specifically for Metallica though, it propably won't provide quite the expected EveRy Note Full PoWer In Your Face -kind of outcome.

Not the answer you're looking for? Browse other questions tagged electric-guitar picking or ask your own question.