Do conductors scores (“partitur”) ever differ greatly from the full score?

I believe most conductor’s scores are full scores, with all instruments appearing on them in a prescribed order, in the same notation the player will see

However, it seems like there would be occasions when the full score is not ideal in some way. Perhaps in cases of polymeter/polytonality and other complexities/ambiguities, it may be easier for the conductor to transpose or change the meter of some parts. I suppose maybe also the score might be customised by the conductor based on different players performance.

In such cases (or any others too), do conductors highly customise the full score?

Do some conductors have drastically differing partitur for the same piece?

There are often various scores for a piece that conductors can choose from:

In any case the conductor will usually enter a lot of markings to make sure they don't miss any anything important.
This is an excerpt from Leonard Bernstein's marked up score for Mahler's First Symphony (of course another conductor would use totally different markings): 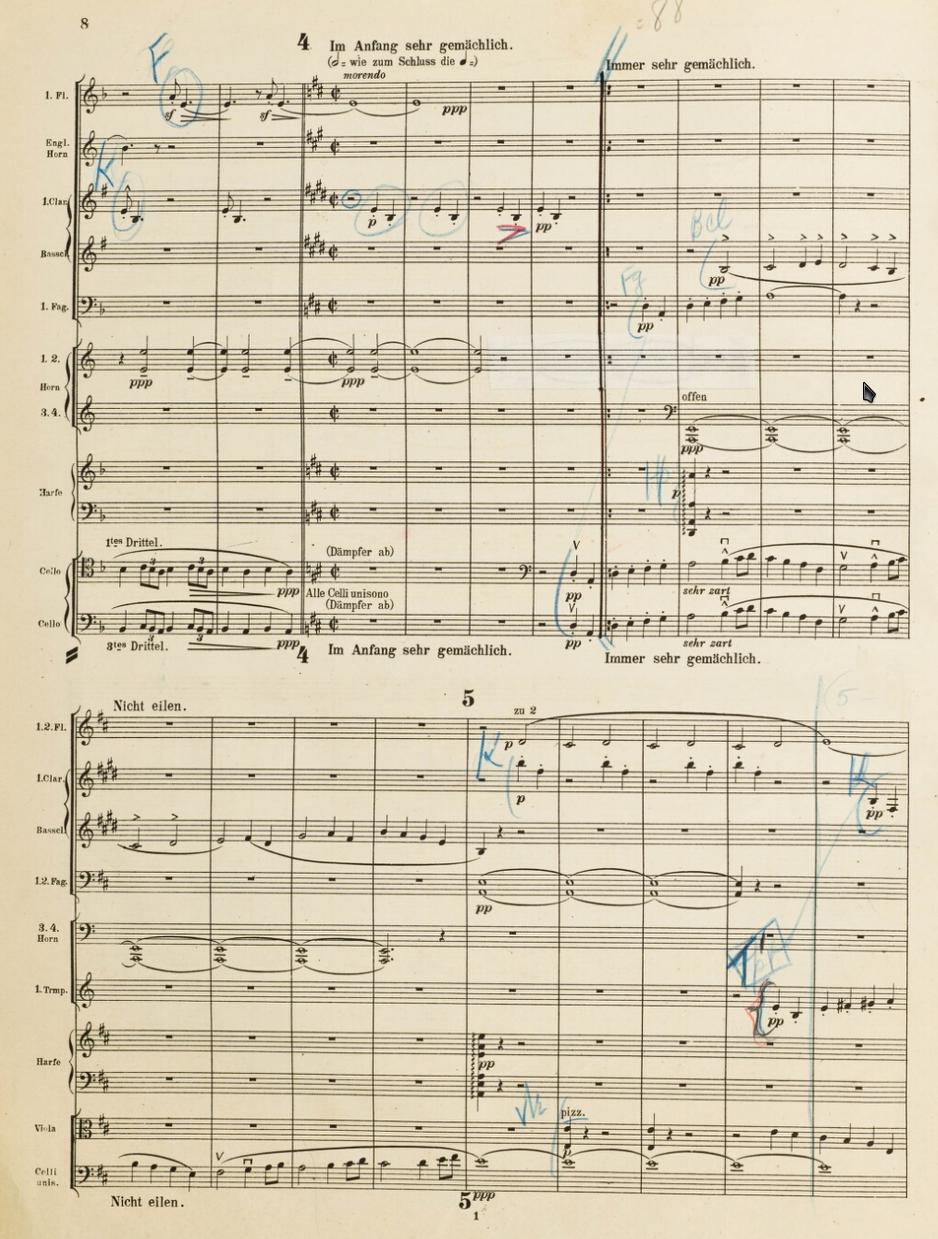 In such cases (or any others too), do conductors highly customise the full score?

Conductors do not typically produce the score. This is done by the publisher, or, for a new work, the composer or a professional copyist. As noted in the other answer, the conductor typically makes notes in the score, but it's not usually possible to modify the grouping of multiple instruments on one staff, for example.

Older works may be available in multiple different editions in which editors have made different choices about how to present the piece. For such works a conductor may choose a particular edition based perhaps on choices such as that. But even so, most editions will follow the practice reflected in the composer's manuscript. Generally, composers and editors all follow standard conventions, and deviating from them would not generally have a lot of benefit.

In the present day, with computerized music notation, it is somewhat easier for a conductor to produce a customized full score or even a complete set of performance materials. But it is still a huge job, and most conductors won't be likely to do it. Furthermore, for works protected by copyright, the conductor would need permission to do so, which might be denied.

it may be easier for the conductor to transpose or change the meter of some parts.

This is tantamount to sacrilege in classical music (except for renaissance and earlier music, as note values have been inflated over the centuries and there have been other significant changes in rhythmic and metrical notation). But if a conductor wanted to do this, it would be necessary not only to change the score but also to change all the performing parts. Otherwise it would be too confusing to try to communicate with the orchestra during rehearsals, because the conductor would have to remember to translate from the meter in the full score to the meter in the players' parts.

Not the answer you're looking for? Browse other questions tagged sheet-music performance-practice conducting or ask your own question.

7
When was the first recorded usage of a musical score?
9
When and why should the conductor be separate or not from the musicians?
2
Learning blues piano from music score
15
What greater possibilities allows playing late from the conductor
1
Sharps at the start of a score
17
Free software to create a score from scratch
8
Where does the tradition of bowing after a performance come from?
4
How to read conductor's gestures from the side
1
Why oughtn't conductors use and mirror both hands to indicate the beat?
3
In general, do chamber musicians prefer to play from a score or from an individual part book?