Is there a name for dropping the bass note of a chord an octave?

Take the following example (I'm a guitar player, so I'm going to give a guitar-centric example):

Now let's say you're feeling a little bold and instead you play that triad by playing the A string open, without fretting it. The other fingers stay right where they are. It's not an inversion (says the novice with far too much conviction) because the A continues to be the bass note. But it's a distinct voicing change.

Is there a name for this?

This is usually referred to as an open or spread voicing, it is a general term to indicate the voicing of the chord spans beyond regular stacking, or close voicing. You are right that it isn’t an inversion. The guitar lends itself to many different ways to voice the same chord. Depending on the chord sometimes the guitar will give you options for open strings even when playing high up the neck and those chords usually have an extra nice quality to them.

Yes, but your question title and body describe two difference cases that bring up different terminology.

...A major triad using the C-shape...playing the A string open

When the tones of the chord are arranged without skips - basically within one octave for triads and seventh chords - it is called close voicing. When there are larger spaces between tones it is called open voicing.

As you point out this doesn't necessarily make a new inversion.

...dropping the bass note of a chord an octave...

I jazz there is something called drop voicing where the voices of a close voiced chord are labeled by number descending from the highest voice. SATB would be numbered as soprano=1, alto=2, tenor=3, and bass=4. 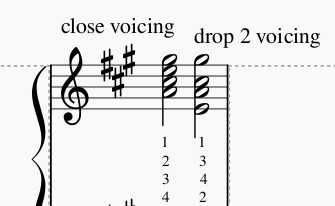 I have only seen drop voicing in the context of four tone seventh chords. Calling a root position triad with the bass dropped a "drop 3" chord would seem inappropriate.

I imagine you didn't mean to have a distinction between your title and question body, but you should know about the two cases.

I guess you’re looking for a term like ‘drop 2 voicing’, where the second note from the top in a close position chord is dropped an octave? I suppose we could say ‘drop 4’ (if it’s a 4-note chord), but we don’t really. There’s the general idea of a ‘spread’ or ‘open’ voicing, but that doesn’t mean ‘keep the top notes close, just drop the lowest one’. It certainly isn’t a different inversion, the lowest note doesn’t change.

If you need to describe this, safer to just say it in plain English I think. ‘Bottom note down an octave’.

4
What might make for "ambient" or "atmospheric" classical music?
4
What's the name for a four, or five note chord?
1
Pentatonic minor keys
10
Playing complex chords on a 6-string guitar
2
Is there a name for chord shape 322450 on guitar?
1
Functional harmony: extending the minor triads in Minor Swing
30
Advantage of 7-note based theory over 12-note alternative
1
Rules for making guitar chords playable on the fretboard
1
Could dropping the root note fit well into certain melodies?