How does changing a guitar string's tuning affect its timbre?

I'm not a guitar player, but have been reading some posts about alternative tunings. There are several mentions of how tuning a string up or down can change its timbre, but I haven't found anything specific about the nature of those changes.

Are there some principles or consistent patterns in terms of what timbral changes to anticipate when changing the tuning of a particular string? Are such changes affected by the specific guitar involved (acoustic vs. electric; number of strings; instrument size or shape; ...)?

The post that got me started was How to tell if a song is tuned in half-step down. That led me to Why tune the guitar other than standard? and What is the point in different guitar tunings?

There are a couple possible interpretations of the question.

One is to take a song, let's say a simple Am - Em - Am progression, and to tune your guitar down a half step, and play Abm - Ebm - Abm.

There is some difference in sound just from being in a lower key. When you go lower, chords gradually sound "muddier". Is this considered a timbre change from the tuning? Well, when a metal guitarist talks about "how much beefier drop B sounds", this is probably what they mean.

Well, what if we were to tune our guitars differently just for the timbre and keep our music in the same (concert pitch) key?

(You might debate my choice to use the words "brighter and darker", but there is definitely a particular type of sound that comes from longer, thinner strings*.)

Given that, let's consider a tune that doesn't use open strings, which we could easily play in different tunings. Let's imagine playing: 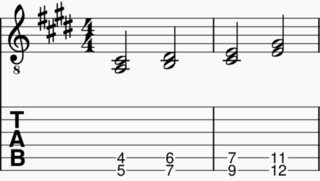 Let's tune down a half step now. If we want our strings to have the same tension as our E standard setup, we change our strings to a thicker set. Also, since we want to play in the same key, we have to move all our chords (/dyads) up a fret. Now every note we hear is coming from a thicker, shorter string now, so our Eb tuned guitar sounds darker.

But wait! We could also move the entire riff up a string! Now everything is being played on a thinner, longer string, so it sounds brighter instead! Which is it?

We could always choose to play notes higher up on the neck for a darker tone, so these statements describe how the brightest version of each note changed.

I will update this with a better source if I ever do find one. This gives a model of a stiff string oscillator (like a guitar string) where high frequency harmonics are damped more on strings with a higher ratio of width to length- in other words, shorter and thicker strings are darker. There are also synthesized demonstrations of different strings, which will give you an idea of what I mean by "brighter or darker".

In addition to the other answers, if you lower the pitch of a string, then the amount the pitch is higher when first plucked (the "waaoh" effect) will increase, given the same displacement (how far the string is pulled sideways when plucking) and same elasticity of string. This is because the lower tuned string has less tension relative to its mass, so the increase in tension caused by its vibration is relatively higher than for a string with higher tension. This may or may not be considered a disadvantage.

I'm assuming the question simply means not changing the gauge of the string, or its length.

So the factor involved is simply the tension of said string. There is a window of tension where that string will vibrate happily, and sound good. But there comes a time when the string becomes so loose, it just rattles. There will be a scientific reasoning behind it - not available from me. But the fact is, the slacker that string gets, the wider the vibration when it's plucked. On electric, that will be picked up by the pups, as a stronger signal. More movement, more electricity generated.So the sound of the open string, or when it's fretted, providing it still produces a discernible pitch, will have a different timbre than the original. The same spectrum continues in the other direction, too, until the string stops sounding at all - it's just gone 'ping'...

Not the answer you're looking for? Browse other questions tagged guitar strings tone alternative-tunings or ask your own question.

5
How to tell if a song is tuned a half-step down?
7
Why tune the guitar other than standard?
5
What is the point in different guitar tunings?

6
How does the angle of strings above the headstock affect tone and stability?
10
Restringing a 12-string guitar with heavier strings - is it possible?
11
When tuning a guitar, why is it only in tune for a moment?
1
Nylon strings for alternative tunings on hollowbody electric
2
Is guitar action affected by tuning?
14
Why does my new guitar become untuned every day?
4
Why do I want different guitars for different tunings?
2
Can you move the strings on 3/4 size electric guitar to get better tuning?
1
Tenor guitar tunings: which is higher pitched?