I am a professional organist who has been self -teaching improvisation from an organ improvisation textbook by Marcel Dupre, titled "Complete Course in Organ Improvisation, volume 1."

At this point, I am half way through the book, but have been using it from beginning with my piano students and find myself unable to explain to them several Roman numeral symbols as I never encountered these ones before. I am referring to the IV with a 3 and IV with a 5 above it in the attached picture. Also, the I and III with a 5 above it.

When I first did these exercises myself, I played the IV and I in root position unless it had a 6 or 6/4 above it. I have asked several professional organists re this and got either no answer or advice to play this in root position. Anyone have any ideas? . 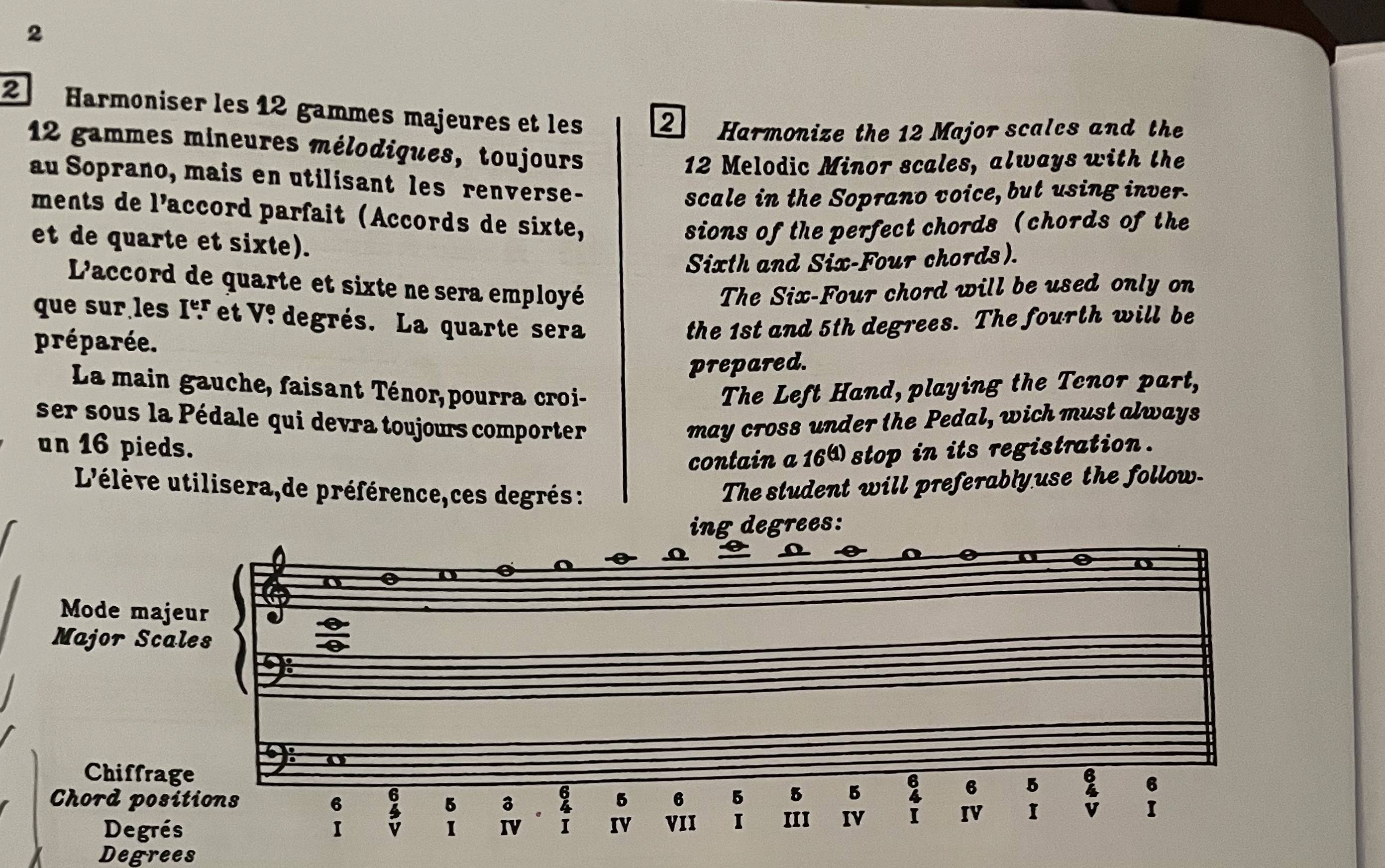 My first thought was that 3 and 5 both meant root position (perhaps clarifying the soprano pitch). But this results in blatant parallel octaves in two spots:

Based on the other voice exchanges in this example (like the opening and final three chords), stepwise motion in the soprano should be reversed in the bass (thus a C–D–E soprano is harmonized with an E–D–C bass). Following this logic, the F–G–A soprano is clearly intended to be harmonized with an A–G–F voice exchange in the bass, suggesting that the "3" notation somehow suggests a first-inversion chord. The "5" notation, however, seems to be a root-position chord.

As for why this notation is mixed like this, I unfortunately don't have an answer.

I haven't seen this type of notation before but it looks similar. My comments probably ramble as I and guessing what is meant.

Your picture is similar to the "Rule of the Octave" which is an exercise in harmonizing ascending and descending scales. In this case, the text says that the scale is in the melody (seems useful to me; I harmonize melodies more often than I fill in a bass line.)

I'm assuming the Roman numerals indicate the chord to be used. Based on the first chord illustrated, there is an E in the bass which suggests a I63 chord; this is confirmed by the symbol I6. Thus the I64 would be a C chord with a G in the bass. So we can use the Roman numerals to give the bass and the scalar melody to give the soprano and the chords need to be filled in. Seems like you got this far. The 5 and 3 are usually omitted but I guess these mean that a 5 or 3 should be played. It's possible that the 5 and 3 indicate the first interval above the bass. Thus the I5 would have C-G as its lowest interval; this makes sense as one doesn't want to double the third of a major chord.

It looks like the 3 and 5 follow the old rules "never duplicate third of a major chord" and "always have a third in the chord" and possibly "duplication the third of a minor chord is OK." This leads to a reasonable harmonization; the seventh step gets harmonized wo that vii06 (though the book uses only upper case letters.)

These are two different notations:

Normally basso continuo is written together with the bass line. In this exercise the student is supposed to write the bass line and the other voices based on the soprano line, basso continuo numbers and hints from roman numeral and the text instructions. Kind of reverse order riddle.

E.g. the first chord is I (C major). 6 means there is an interval of 6 between the bass and another chord component. Typically this means 1st inversion, thus third in the bass. Indeed we find E written in the bass line. Probably the other two voices should contain G, and perhaps another C.

The second chord is 6/4, which might be second inversion. V tells us it's a dominant. I would presume then the bass note should be D, then other two voices would be G and B. And so on.

After re-reading the question and Richard's answer, perhaps I can clarify better the chords in question.

Not the answer you're looking for? Browse other questions tagged improvisation roman-numerals organ or ask your own question.

3
Guitar blues soloing- Minor/Major
0
What is V65/III in D major?
3
What does this arrow mean in the chord annotations?
5
Using standard Roman numeral analysis how should 7th and 9th qualities be determined?
4
How to write Roman numeral figures for non-chord tones (NCT) and inversions, triads and seventh chords?
0
What does "vox humana" mean in Organ building?
5
Minor Key (and other key?) Roman Numeral Analysis
0
Roman numeral analysis of chord with non-chord tone in bass
8
What is the difference between the bIII and III chord in a minor scale?
15
What does "super" in title of organ pieces mean?