2 atypical cadences, are they half cadences?

So, I analyzed the harmony and structure of Grande Valse Brilliante op. 18, and most of the cadences make perfect sense to me, but there are 2 cadences that don't really, one on the tonic, which I can explain better and one on the subdominant, which is weird to me. Here are both of the cadences in question(second cadence is in Db major): 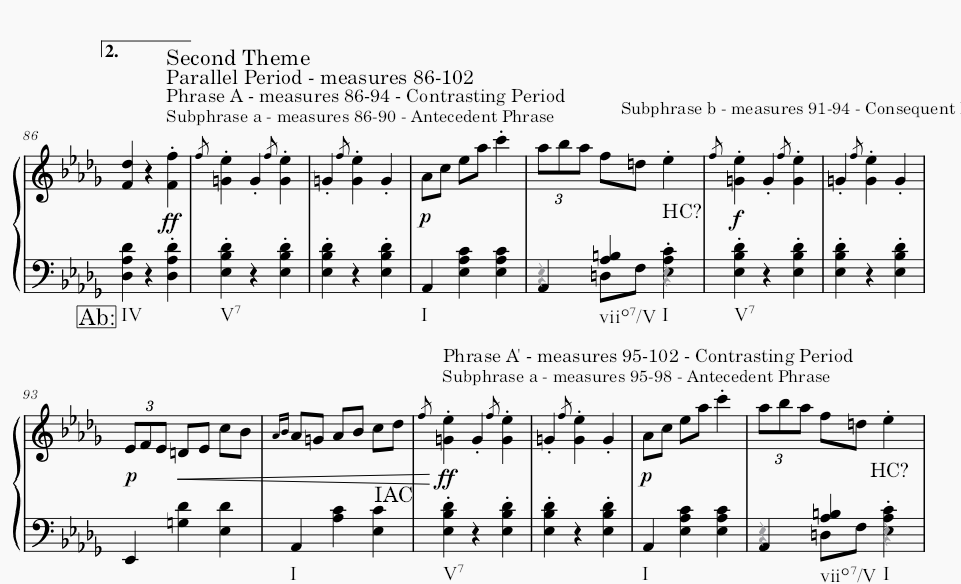 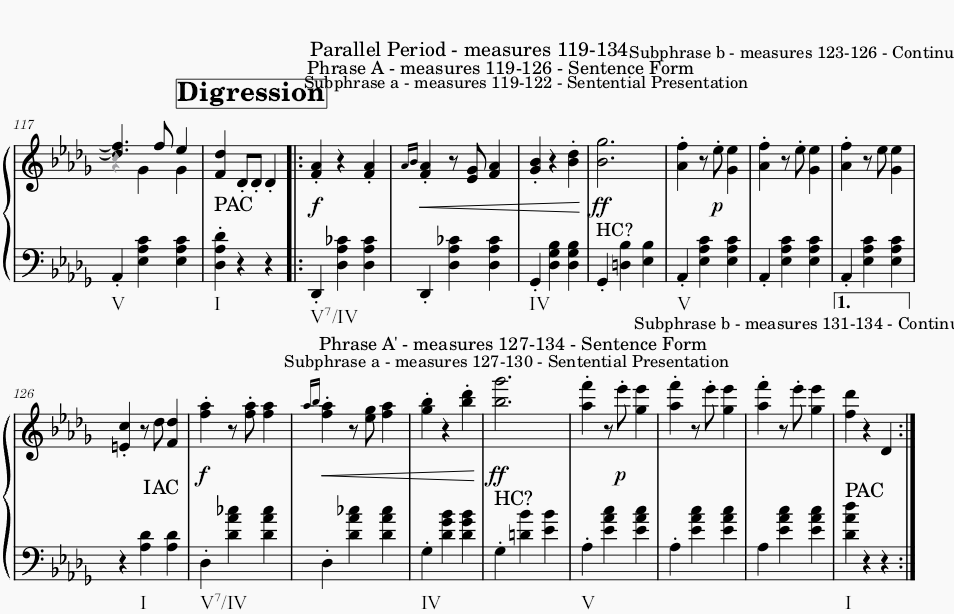 I can explain the tonic cadence better than the subdominant one. Okay, here goes. The typical definition of a half cadence is a cadence on the dominant which feels like an end, but incomplete, or as Seth Monahan says in his video on cadences "it leaves us waiting for the next one".

Measure 90 of Grande Valse Brilliante has that tonic half cadence and so does measure 98. In both cases, a secondary diminished chord of V goes straight to the tonic, in this case Ab major. And in the answering subphrase, you have V7 going to that same I. And this combined with the dynamics means that the first cadence on tonic feels more like a cadence on V, a half cadence, than the IAC it would be if you went with the strict definition of half cadence.

Measure 122 has that subdominant half cadence that I am stumped on. Why do I say subdominant? Well, the key is Db major here and look at bar 121, you have these notes:

Gb, and Bb with a chromatically rising bass through D and Eb.

And it can't be V7, because the only notes typical of the V7 chord in there are Eb which is on the third beat, a weak beat and Gb which is in the preceding IV chord. If it were a third inversion V7, I would be expecting this instead:

But there is no Ab or C, so this can't be it. The easiest explanation is that you have non-chord tones in the bass and it's still a IV chord. That's the one I went with. But this shouldn't be possible. A IV chord with a dominant function? And yet, I can't say that it's a PAC on the subdominant because there is a V7/IV, but it doesn't feel like a tonicization of IV if you know what I mean, it feels too brief to be a tonicization. And I can't say that it's a plagal cadence either as it isn't moving back to tonic from the subdominant. And the phrase starts on the dominant of IV and the answering phrase on the dominant of I so again, not your typical half cadence on V. And yet, it somehow sounds like a half cadence.

So what is going on at the subdominant cadence if it isn't a tonicization of IV or a typical half cadence? Why does it feel like Chopin is doing the impossible here by making IV have a dominant function? And is the tonic cadence that I mention sounds like a half cadence really a half cadence? I mean it sure feels like one compared to the IAC in bar 94.

The reason this feels like a half cadence is that the diminished chord is voiced such that the outer voices (i.e., the most audible voices) form a double leading tone around scale degree 5. Thus, although a tonic chord, being in second inversion already weakens its tonic effect, and the emphasis on 5 lends it a distinctly "dominant" feel.

The effect can be clarified by revoicing the chords to keep the Ab in the bass throughout, giving the measure a more clearly "tonic" quality.

Mm. 119 - 122 are a prolonged predominant, which could be fairly called an authentic cadence in IV; however, that immediately gives way to the ii chord, which is functionally equivalent, but more harmonically interesting than a full measure on the IV chord. That presence of the ii chord is the source of the "dominant" feeling. The root motion is from Eb to Ab.

Looking at the score and recalling this waltz's phrase structure, I'm honestly not convinced that any of the chord progressions of Bars 90, 98, or 122 are cadences at all. Although all of them occur at phrase endings, all of them also have their measures' left-hand parts start with the same note as the start of the previous measure's left-hand part. Combined with the right-hand parts, this gives off the impression that they are prolonging the chord progression of the previous measure instead of being full-blown cadences that provide closure. Honestly, the transitions of Bars 88-89, Bars 96-97, and Bars 120-121 sound more like cadences to me.

Strictly analyzing the chord progressions, I find it hard to disagree with Aaron's answer, with Bar 90's claimed resolution of a common-tone diminished 7th to I6/4 and Bar 122's mid-bar shift to a claimed Vaug.6/ii - ii. But it's hard to dismiss the starting left-hand note of each of those measures and the impact it has on harmonically analyzing the rest of the measure, especially in a waltz such as this that typically assigns only one chord per measure.

Not the answer you're looking for? Browse other questions tagged harmony cadence functional-harmony chopin or ask your own question.

5
Need help about Harmonizing Cadences
10
Why aren't unusual leading tone cadences more common?
4
Harmonising cadences given the bass line. When and when not to use inversions?
3
Is the typical use of the N6 Neapolitan chord to lead to a perfect cadence rather than a half cadence?
4
How to make a plagal cadence sound convincing as an ending?
3
Diminished seventh cadence, is this an IAC or a PAC?
6
In a minor key can a cadence on the relative major be considered a type of quasi half cadence?
4
How is Db major functioning here? Subdominant Prolongation? Some kind of Dominant?