Why does F# minor chord fit A minor key

Playing the guitar I noticed a really cool sounding, kind of mysterious progression, which looks like this

The F# minor creates some tension which is resolved by F major. However F# minor is not part of the A minor scale. This is one progression which seemed nice to me and I would love to dive deeper into that and use the same idea in different setups.

Is there some theory which would explain why F# minor fits well here?

Individual notes can manipulate the harmonic context, which means the listener's assumptions about what is the tonic note, what intervals there are around it, and what is the current balance - are we standing up straight at rest on the tonic, or are we leaning one way or another away from balance. But a single note can do only a little. Chords have multiple sounding notes at the same time and they are more powerful harmonic bulldozers.

When you hear a strongly played note that's not included in whatever set of possible notes around the tonic you had in mind, it begins to alter your harmonic context. If an "outside" note is strong enough, played on a strong enough beat long enough, then it switches a "scale slot" in your mind to a different position. For example if you're in C major and consider the C major scale as your current surroundings, and you hear a D major chord which has an F# note, then the F scale slot gets switched to sharp position. Click! At least temporarily. If you then hear an F chord, the F scale slot is returned back to natural position. Click! On a sheet music staff these temporary changes are denoted with accidentals on the F position, first a sharp accidental, and then a natural accidental when the slot is changed back to natural. (Or if the return back to normal doesn't happen inside the same bar, the next barline cancels the accidental, but that's just notational practice.)

These Click! Click! switchings create feelings. They make you re-consider the harmony. Some changes can even move the tonic, and this is called a "modulation". Some changes only change some scale degrees, for example in C major, a C - C7 - F chord progression temporarily changes the B scale slot to B flat mode for the duration of the C7 chord. Or if you're in C, and you play C - F - Fm - C, then during the Fm chord, the A scale slot is forced to flat position. The rest of the scale degrees aren't mentioned by the Fm chord, so you are free to imagine anything about them.

A soloist can produce phenomena like this by superimposing notes from different scales over the backing chords. For example if your song is in C major, a jazzy trick is to play notes from C minor or Eb major scales. This creates a certain ambiguity when your ear starts to think ... wait a second, is this C major or C minor or both at the same time. Some notes are the same, some are different. This effect is used in blues and jazz by deliberately switching the scale back and forth between minor and major settings, partly or as a whole. It's a standard jazz trick - switch between parallel major and minor feelings, and you can also see it as moving the tonic by 3 semitones. Altering the mode creates feelings.

Your Am - F#m example can be seen as a standard jazz trick. Click! Click! Scale positions switching to different settings. Some people call that "borrowing" from other modes or keys. If your borrowing or scale change lasts long enough, your ear eventually settles down in the new position and starts to consider it the new permanent home. Try it, play the F#m for a few minutes. At some point you have completely forgotten about the Am and C.

Not realizing that outside-scale notes just change the harmonic context seems to be a problem for many people who think that the initially declared seven scale notes are a very rigid immovable structure. But in minor key tonality, a scale modification usually happens every time there's a dominant seventh chord. When you play Am - Dm - E7 - Am, then during Am and Dm, a G melody note feels just as fine and acceptable as a G#. But during the E7, the chord's third i.e. G# forces the G scale slot more firmly to sharp position, so you'll most likely use a G# melody note there. But after that chord is over, the G slot is free to move back to natural position.

If you want to try "milking" this phenomenon, just repeat the chords F and F#m. Over the F, try playing things from the A natural minor scale, and over the F#m, play things from the A major scale. Particularly the notes which are altered by the changes, for example C# over F#m and C over F. Here is an example song: 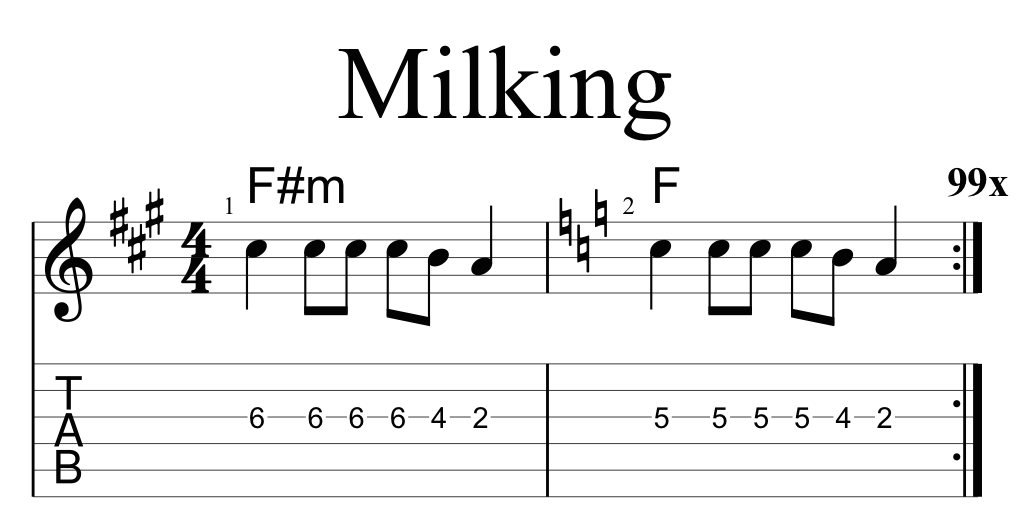 mysterious ... seemed nice to me

Let's put some of that into Roman numeral analysis:

(When I play this on piano with smooth voice leading as an insertion elaborating a descending ^3 ^2 ^1 in soprano F feels like it could be tonic. When I playing it on guitar with open Am & C and barre chords for F#m & F then Am or C feel like possible tonic with the dominant chord omitted. Either way Am, C, & F are diatonic, albeit ambiguous vis a vis key, and their diatonicism is the important thing.)

So, three of the chords provide a plausible tonality of F major, we have identifiable dominant and tonic chords. Nothing unusual, but I think it's good to establish those chords are diatonic and that is ordinary.

iii to V is a kind of relative minor/major relationship that provides a somewhat "modal" sound. It can have a sort of "moody" feel balancing minor and major, common in folk and pop.

Both of those thing support the "seems nice to me" sense. Diatonic chords, relative major/minor pairs seem to sound "nice" to most people.

The F# minor is the mystery chord. Both in the sense that you say it has a mysterious quality and in the analysis it's a mystery, because it doesn't fit a "function."

So, why does it work the way it does?

If you put the chords into smooth voice leading, you could have...

...where the F# fills in the half step between G and F.

I would love to dive deeper into that and use the same idea in different setups.

Use the half step motion to lead to another of the diatonic chords...

Instead of using the half step motion to descend to a diatonic chord try ascending motion. Here it is with both descending and ascending half steps, voiced a few steps lower...

I think all of those are potentially usable. They all have something of that "mysterious" quality. They derive directly from re-applying the musical factors of the original. Of course you could continue that process to come up with more ideas. I put them all in even whole notes, but that's just place holder rhythm. You would want to work up some interesting rhythms and figures to flesh out those skeletons.

The song Crystal Ship by The Doors has some changes like these and very much has a mysterious mood. If you don't know that song, check it out, I think you might like it.

Yeah basically like he said it is just borrowing from the vi of the key of A major and going down chromatically to F.

Not the answer you're looking for? Browse other questions tagged theory guitar or ask your own question.

9
How to determine what key changes are appropriate?
7
Why does the IV - V♯ - I chord progression work so well?
2
Em9-A-B progression - would you consider that a key change?
5
Triads with thirds that aren't major or minor?
3
Chord notation: a minor chord with a minor 6th
0
Does chord type(major or minor) remains the same for common chord progressions irrespective of any mode or scale?
1
What is the chord progression and also the technique used in this rock riff?
2
What is it called when the tritone is added to a minor scale?
1
Moving from min pent to aeolian? How does tension resolve work
9
Tritone substitution to a major chord?