What is the name of a minor chord with a minor 9th?

If I take a standard A minor chord as a barre chord on the 5th fret of a guitar and play it but move my pinky from the root note A on the 7th fret and move it to the 8th fret, I get a dominant chord sounding chord. Essentially it is an Aminor with a min9th... is this called a minor 9th chord? and why does it sound like a dominant chord?

I would call it Am b9 (A minor flat nine), it sounds like a dominant, because it has the notes of a C dominant chord, something like "C7 add 6 omit 5 / A" and it resolves to an F chord. If you leave out the bottom A note, it's a nice dominant for F.

Edit. At least in some kind of theoretical thinking, a "b9" chord tension means that "there is a ninth", and because there is a ninth, there should also be a seventh, because chords are - in theory - built from stacks of thirds. To explicitly state that one of the notes in the stack are missing, words "add" and "omit" can be used. For example "C add 9" would mean that there's a root, third and fifth, but no seventh. Or "C9 omit 3" would mean that there's the root, fifth, (flat) seventh and ninth, but no third. In practice however, some chord notes are routinely omitted. In 11 chords the third is omitted so systematically that it's even "officially" stated in some theory material, and the chord is in practice used as a jazzier sus4 chord. In 13 chords, the 5h, 9th and 11th might be left out either because they add too much mud or because e.g. the guitar simply doesn't have enough strings and guitarists don't have enough fingers to play theoretical 13 chords.

From your description, the chord is based on the A minor triad (A, C, E), with an added Bb, the minor ninth. The correct label for the chord would be Am (add b9). It is probably better to call it "add b9", instead of simply "b9", since that may be taken to imply the presence of a flat seventh, which you don't have. That said, since this chord is not used as often, you'll find that some people notate it one way, and others the other way.

Why does it sound like a dominant chord? Most importantly, there is a tritone between E and Bb. The tritone is the characteristic (tense) interval of dominant chords (at least if you use the word "dominant" mostly in a jazz sense).

As in one of the other answers, you should compare your chord with C7. C7 contains C, E, G, and Bb. Your chord contains C, E, A, and Bb. So the fifth of C7 (a G) has been swapped for an A. Overall, this is not that big a difference, since the two chords have roughly the same intervals:

This pattern is also referred to as the all-interval tetrachord. "All-interval" because it contains each interval type exactly once, "tetrachord" because its a chord with four (tetra-) notes.

C7 has the following intervals:

So these chords have a lot in common, which is why they sound alike. That said, using different root notes and inversions can make a big difference to the ear. Using A minor and then sneaking in the minor ninth as a color note is a more subtle way to evoke a tritone dominant than simply going for C7. Good luck with your discovery process!

I feel it's a red herring to say there's a m9 in the chord - unless you still want it to be A based. But then the dominant sound won't emanate from it having root A. And, that apart, Am9 is a completely different animal.

I think your question is really about jazz chord nomenclature.

"Minor nine chord" in jazz would be a minor triad with a major ninth, ex. Am9 called "A minor nine."

In Roman numeral, functional analysis the wording can be different.

Aminor with a min9th... and why does it sound like a dominant chord?

A dominant should be a dominant to something. I'm not sure how your hearing it as a dominant. It could go two ways... 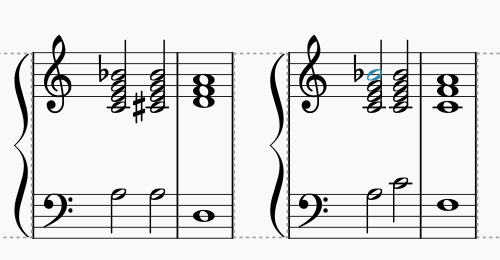 An am7b9 chord sounds like a dominant chord because if you don't play the bass tone you have the V7 of the relative chord: I would notate this chord as a V7/and the relative minor root bass tone.

28
Why does the dominant chord contain a flattened 7th?
6
What are the notes in a 11th chord?
4
What is a chord consisting of Root, 9th and 11th called?
4
Chord construction using the minor scale
2
Accounting for intervals not present within the chord ratio?
4
A chord with only the root note
0
What chord is Dm7 with a Bb?
3
Why No Augmented Minor Chord?