What does the colour scheme mean in this chord chart?

I found this handy chart stapled at the centre of a manuscript book. 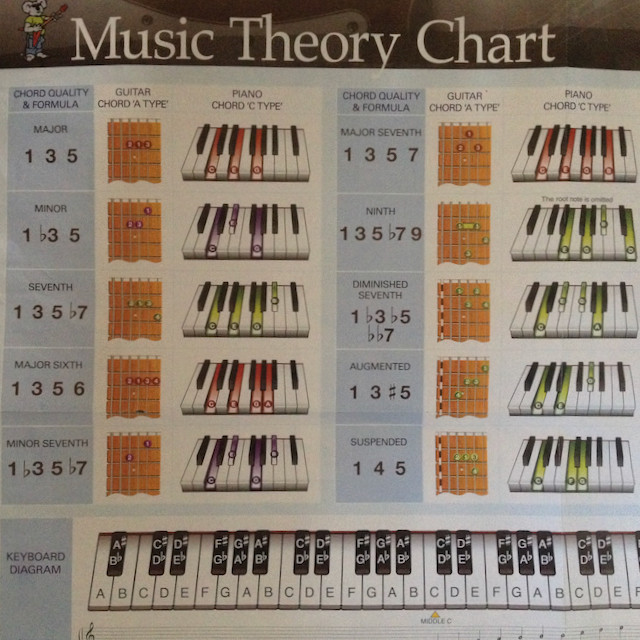 I will go with some logic, a bit of "hunch" and some critics.

The colors are tricky.
I'd try to justify them by saying: green is where you "keep moving", red or purple (which is similar to red) is where you "can stop".

But, the reality is that I believe that that chart is just misleading, if not just wrong without any given (and justifiable) context, and that's also because it only shows the "fingered" notes for the guitar on the keyboard, which is very confusing: those chords do not sound like that if played on a keyboard just as written, and they are not the same.

The most clear case is the ninth, which actually is more a half-diminished chord. Yes, those chords share very similar aspects, but if the 9th is shown without a tonic, then why the minor 7 and the major 6th should differ?
And, no, just saying "C type chord" is not sufficient.

If the base triad is the main determinate of category, why does green include diminished, augmented, and major base triads?

Rather than significant, I would call the color scheme haphazard.

Two categories of stable chords with no tension notes

Then a category for less stable chords, ones with 'dominant' 7ths, suspensions etc.

But give @musicamante the vote if he comes up with it as an answer!

1
Transposing song that contains notes/chords outside the root key to a new key
3
What is the purpose of suspended chords?
9
When was the dominant ninth chord incorporated in music theory?
21
Which are all the musical intervals that are valid?
0
Is a doubly augmented seventh a compound interval?
3
Chord naming: "seventh flat ninth *piano* chord"
5
Why does Hindemith say to avoid augmented and diminished intervals?
9
What do you mean by the tonic chord feels as 'home'?