I just brought home a Peavey JSX 4x12 cabinet and realized that it's 16 ohms while my other cabinet (Marshall 4x12) is 8 ohms. The JSX has two jacks in parallel for chaining while the Marshall has a single jack. 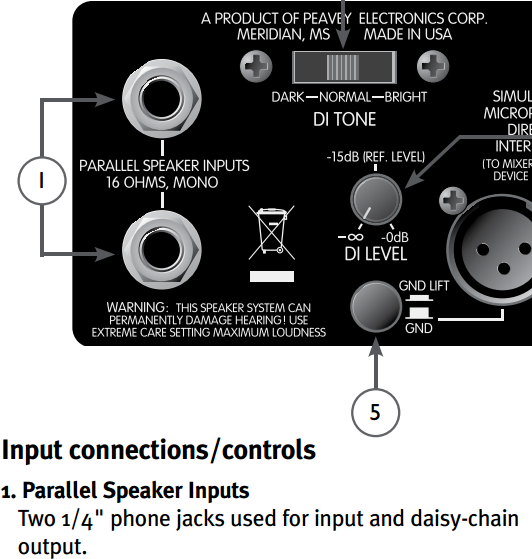 My amp head, a Peavey Windsor, has two speaker jacks at 16 ohms parallel with a switch for 4/8/16 ohms.

If I understand correctly, if I set the amp to 16 ohms, connect it to the JSX cab, then use the second jack to daisy chain to the Marshall Cab, it should work .... maybe?

If you parallel the two cabinets, the resulting nominal impedance will be around 5.3 ohms. This uneven load distribution not ideal; the lower ohmage Marshall cabinet will draw something like two thirds of the power. So on the grounds of power alone, it may be louder by several decibels, and if the speakers in the Marshall also happen to be more sensitive than the Peavey ones, the Peavey cabinet might as well not be there. Do an experiment to see. (Use the 4 ohm setting on the Marshall amp.)

It could work out as follow: suppose the quieter cabinet is close to you, functioning as a monitor, and the louder one farther way to give you a more ambient, somewhat delayed sound, resulting in an interesting fuller overall sound.

Cabinets cannot be rewired such that their impedance is changed by a factor of two, only by a factor of four, so they cannot be made to have equal impedance. However, the possibility exists of swapping pair of speakers between the two cabinets. Then you can make two equal-impedance mongrel cabinets with an identical configuration of speakers: perhaps two 24 ohm units that can be paralleled to make a 12 ohm load.

All in all, odd numbers of speakers, or imbalanced speaker impedances, are not such a great idea.

Figure out which one you like the best, get rid of the other one/trade for matched impedance/sensitivity, you'll end up happier in the future; by the way, parallel is the opposite of chaining (series). I wouldn't mongrelize to 12ohm/12ohm, you won't be able to adjust the amp (the multi-tap output transformer actually) to "see" the correct load on the output of your power tubes (why you have an impedance selector in the first place), as mentioned above "not a great idea"… it's not just the difference in impedance (path of least resistance for the output current), but the difference in output sensitivity (output dB at one watt vs. one another matching), something somewhere is going to be out of balance any way you do the math.

Dr Mayhem has answered correctly. There is no harm in running a higher ohm cab than the amp. The problem is when you run a higher ohm amp than a cab, like an 8 ohm amp with a 4 ohm cab. The current goes back onto the output transformer. The key is for amp (tube) to always have the amp with lower ohms than the cab. Hughes and Kettner has good info on this on their site. If you have 16 ohm and 8 ohm cab....like mentioned above it is approximately 5 ohms. Run your amp at 4 ohms with this setup and there will be no issue.

As you noted in your comment, running an 8 ohm and a 16 ohm in parallel gives you 5.33 ohms. Setting your head's output to 4 ohms will ensure a safe output current.

Not the answer you're looking for? Browse other questions tagged electric-guitar amplifiers speakers or ask your own question.

3
Can I use a Line6 Spider combo amp as a cabinet?
3
Can an amplifier with only one output be wired in parallel?
0
Ohm ratings for guitar amp / extension cab
0
How can I connect an external cabinet to use it at the same time as a combo amp's built in speaker?
1
Choosing speaker resistance and power handling for a 1W amp head
1
Help! Amp connection Question
2
How to rewire my cabinet properly
5
Fender hot rod deluxe connected to speaker simulator diagram
0
Splitting a 4x12 to two 2x12s
2
5 watt tube Amp has 2 8ohms outputs and I have 2 1x16ohm speakers. Can I connect them together?